The king's daughter with a popular touch Princess Bajrakitiyabha addresses a U.N. General Assembly high-level meeting on the rule of law at U.N. headquarters in New York on Sept. 24, 2012. (Courtesy of United Nations.)

BANGKOK Princess Bajrakitiyabha Mahidol has a unique position in Thailand, both by birth and from her life experience. She is the oldest child of the country's new king, Maha Vajiralongkorn Bodindradebayavarangkun, and was the first grandchild of the late King Bhumibol Adulyadej and Queen Sirikit.

Princess "Pa," as she is often known, combines a lively social life among high society friends with a more serious side that sees her mixing with soldiers, officials, academics and diplomats. A senior diplomat described the princess in 2009 as enjoying "an increasingly high profile and a reputation for being perhaps the sharpest of the royal family members."

At 38, the princess is expected to play a leading role in support of her father, and in buffing the image of the House of Chakri, the Siamese dynasty founded in 1782. "Though the princess has sought to play a low-key role, she may be in the news as Thais focus on the future of the royal family," the Center for Strategic and International Studies in Washington wrote of her return to Thailand in 2014. 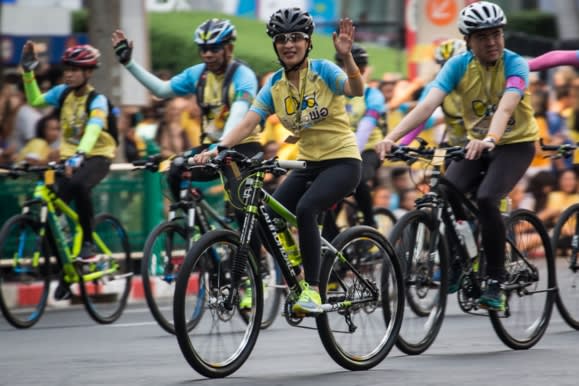 Princess Bajrakitiyabha rides with tens of thousands of cyclists in Bangkok on Dec. 11, 2015.   © Getty Images

Educated in Thailand and the U.K., the princess is a law graduate from Bangkok's Thammasat University and holds a doctorate from Cornell Law School in the U.S. She has also worked as a first secretary in the Thai permanent mission to the United Nations in New York and as a prosecutor in the office of the Thai attorney general.

Princess Bajrakitiyabha has a reputation for comparatively relaxed public behavior and an enthusiasm for outdoor activity. When her father, as Crown Prince Maha Vajiralongkorn, led more than 80,000 cyclists on a record-breaking 43km ride around the capital in 2015 to honor his mother's 83rd birthday, it was Princess Bajrakitiyabha who led the second wave of riders.

The vibrant, unstuffy event tapped into widespread enthusiasm for cycling in Thailand. The princess also sometimes joins more low-key cycling and running events at weekends, and likes to drive herself in a red Mini Cooper S or a vivid green Volkswagen Beetle. In September, she led a party up Fansipan, in Vietnam -- the highest mountain in the Indochina region.

SPEAKING OUT In a more personal capacity, she founded the Princess Pa Foundation with her mother in 1995 to help victims of flooding and other natural disasters. Some 10 years later she founded and personally funded with 300,000 baht ($8,335) the Kamlangjai (Inspire) Project for women imprisoned with their children -- "innocent parties," as she terms them.

She also founded another prison project: Enhancing Lives of Female Inmates. In 2010 her work with ELFI contributed to the adoption of the U.N.'s "Bangkok rules" on the treatment of women offenders, which supplement U.N. regulations for prisoners dating from 1955.

The often humiliating treatment of female prisoners nevertheless remains a major issue in Thailand, which ranked fourth in the world by some counts on the number of female inmates (48,000) as of 2015.

The princess's direct experience as a prosecutor may also affect the way Thailand approaches drugs offenses. As chair of a board advising Thailand's Institute of Justice, a respected nongovernmental organization, she could play an influential role in overhauling the country's creaking justice system, although implementation of any proposed reforms may be a different matter. More broadly, the princess is putting an engaged and contemporary face on Thailand's time-honored institution.