New research into the structure of dinosaur bones, like the ones shown here at Japan's National Museum of Nature and Science, shows they were not the lumbering giants once thought.
TAKURO KUSASHIO, Nikkei staff writerMay 21, 2015 00:00 JST | Japan
CopyCopied

TOKYO -- If you think of dinosaurs as nothing more than giant lizards, it is time to reboot your imagination. A new picture is emerging of the evolution of these ancient beasts, and it seems the old assumptions were off the mark.

Modern research suggests some dinosaurs were surprisingly quick and nimble, not the huge lumbering monsters beloved of B-movie makers. Others were omnivorous, munching both plants and animals.

The three-horned Triceratops is a museum favorite, but the bones are arranged in a misleading way. The elbows of the forelimbs jut outward, like the legs of a lizard, suggesting the dinosaur walked like a lizard, too. But that could be wrong, according to Shinichi Fujiwara, an assistant professor at Nagoya University Museum. "Given the positions of the shoulders and the way the joints are attached, there is little basis for that assumption," he said. 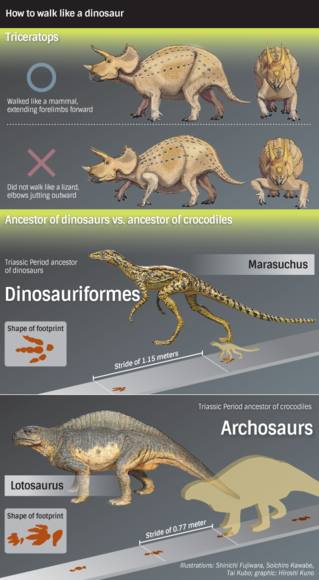 Fujiwara conducted an exhaustive study comparing the bone, joint and muscle shapes of Triceratops with those of modern animals and came to a different conclusion: Triceratops walked like a mammal, with a more upright posture and legs extended straight downward, not jutting out at the elbows like a lizard.

In the early days of paleontology, the focus was on the discovery of ancient fossils. But in recent years, there has been more analysis of the structure and function of what fossil hunters find. That has yielded new details about the evolution of ancient animals.

For Fujiwara's study of Triceratops, the deciding factor was the shape of the elbow joint. By examining the places on the joint where muscles attached, he realized this dinosaur had powerful extensor muscles. In the modern animal kingdom, it is animals that walk with legs extended, such as mammals, that have these kinds of muscles.

Fujiwara realized Triceratops also must have stood more upright, with its abdomen and hips higher off the ground, and must have walked with more agility than previously assumed. "A study of the bones shows how the muscles are attached and how the body moves," he said. He believes Triceratops walked with the insteps of its front feet facing outward and three of its five toes touching the ground.

Another assumption going the way of the dinosaur, as it were, is that the animals were all slow and plodding. Tai Kubo of the Fukui Prefectural Dinosaur Museum did a study of the walking patterns of Dinosauriformes, the Triassic Period ancestor of the dinosaurs.

A prime example of these early beasts is Marasuchus, a small animal only half a meter long that walked on two legs. Kubo studied the fossilized footprints of Marasuchus and many other Dinosauriformes and determined that they walked with an average stride of 1.15 meters.

"Given how high their hips stood, they probably walked very quickly," Kubo said. The earliest of the Dinosauriformes were small animals with long strides for their body size, indicative of a fast gait.

This contrasts with Archosaurs, the Triassic Period ancestor of crocodiles, which walked with an average stride of 0.77 meter. Lotosaurus, a typical example of these animals, was 2 meters to 3 meters long. The fact that it was so much bigger than Marasuchus, but with such a short stride, indicates that it, unlike the ancestors of the dinosaurs, walked with a slow, clumsy gait.

Many Archosaurs went extinct after the Triassic Period, but the Dinosauriformes flourished and the dinosaurs came to rule the world during the Jurassic Period. Animals that can move quickly, even under harsh conditions, can escape from predators and capture prey more efficiently. "The fact that Dinosauriformes could walk fast is probably one reason they flourished instead of becoming extinct," Kubo noted.

Fossilized footprints are what are known as trace fossils -- vestiges not of the animals themselves but of their activities.

Gizzard stones, used by some animals to help grind food in place of teeth, are another example of a trace fossil. They are sometimes found among the remains of plant-eating dinosaurs. But Yoshitsugu Kobayashi of Hokkaido University was fascinated to find the stones associated with the complete fossil remains of two Deinocheirus specimens discovered in Mongolia in 2006 and 2009.

What caught the associate professor's attention was the fact that the remains of fish bones were also discovered among these specimens. That suggests Deinocheirus was an omnivore.

Deinocheirus was a large dinosaur, 11 meters long, that walked on two legs. It had sharp claws like a carnivore, a flattened beak like an herbivore, and a large dorsal "sail" to attract the opposite sex. Being able to eat a variety of foods probably helped it move around in search of a mate. Deinocheirus "had all the good parts" of various dinosaurs, Kobayashi pointed out, so it is a mystery why this animal did not spread worldwide like some other dinosaurs did.

This question may be answered through further study. "Scientists keep coming out with research results that portray dinosaurs moving and living in ways we never imagined," said Makoto Manabe, head of the biotic evolution department at Japan's National Museum of Nature and Science. "It just piques our interest and makes us excited for the next advance."

Window on the world of dinosaurs

Trace fossils provide important clues about how ancient organisms moved, what they ate and how they lived -- things that are hard to deduce from the fossilized remains of the organisms themselves. Flowing rivers and ocean currents can sweep fossil remains far away from where animals died, but by studying them together with trace fossils, scientists can better determine the environments in which the animals actually lived, whether in forests, on plains or near the water's edge.

The challenge is to identify which animal created which trace fossil because many fossilized remains, such as footprints, look alike.