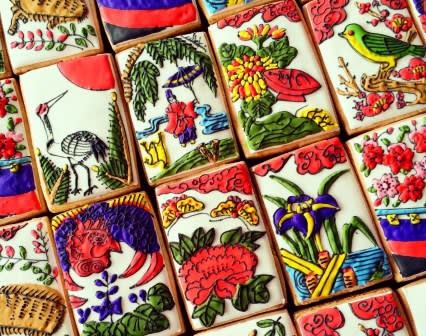 TOKYO Tucked away in a corner of Isetan Shinjuku, one of Japan's most influential department stores, the Isetan Girl section would look at home on any number of upmarket women's wear floors.

But alongside the clothing and sundries you will find "micarina" iced cookies -- sweets featuring icing used like paint to design cute motifs, such as bears and cakes as well as more highbrow depictions of constellations and jewelry.

The palette used to decorate the cookies is created using colored dyes mixed with egg whites and sugar.

Mika Ogawa handcrafts each micarina and delivers about 200 of them every week to Isetan Girl. Most of the sweets are priced between 700 yen to 800 yen ($6.74 to $7.70). Sometimes as many as 100 cookies are sold in a day; at times they sell out entirely.

Ogawa's New Year-themed cookies, in particular, are a hot seller. 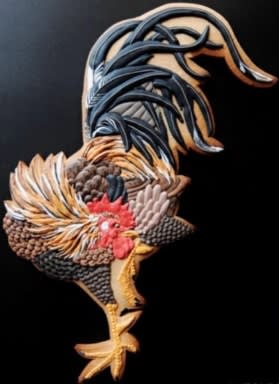 EDIBLE ART Iced cookies made by Chihiro Ogura have also attracted much attention online for their artististry.

Japanese-style patterns and replicas of famous paintings of roosters are among the icing designs for the cookies that are so meticulously created you could be forgiven for thinking they are more art than snack.

Ogura created cookies modeled on the paintings of Ito Jakuchu (1716-1800), whose works often have an avian theme. The confections created an online sensation in May when she uploaded images of the cookies on Instagram and other social media.

According to Ogura, she was waiting in line to visit a popular exhibition dedicated to Jakuchu, titled "The 300th Anniversary of His Birth: Jakuchu" held at the Tokyo Metropolitan Art Museum between April and May. However, she gave up as the line of people stretched so long it would have taken three to four hours just to get into the museum. Instead, she bought a book on the exhibition and, while flicking through the pages, a lightbulb went off: "I made cookies based on images in the book," she said.

Ogura does not have a brick-and-motor store. She markets corporate promotional cookies under the Antolpo brand and also sells other cookies at markets for handmade goods. She sometimes also sells them online. Most of the designs are seasonal: seashells and yukata cotton kimono for summer, and mushrooms and saury for autumn. 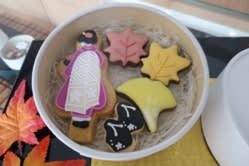 Maiko and other traditional Japanese designs are used to decorate cookies at Kyoto-based icingcookies Tobira.

Icingcookies Tobira, a store that opened in Kyoto in May 2015, makes cookies that incorporate Japanese designs including temari, traditional Japanese thread balls, and maiko, apprentice geisha. The colors of the maiko's kimonos change according to the season.

The prices for the store's regular items range between 430 yen and 1,880 yen.

There are also designs that correspond to seasonal events in Kyoto, such as the Gion Festival in summer. The cookies use natural dyes extracted from vegetables, fruits and cape jasmine. The soft colors match well with Japanese-style designs. The products are popular as wedding favors and for gifts at other celebrations. Children take part in a workshop for designing cookies with icing at a showroom in Tokyo's Shibuya Ward.

FAMILY FUN Cookies like this need not have elaborate designs. Children can get in on the act too, and workshops catering to families are booming.

On a holiday in mid-September, parents and their children relished the experience of crafting cookies inspired by Halloween staples, such as jack-o'-lanterns and bats, at a showroom in Tokyo's chic Omotesando district.

The event was first held in August in hopes of bringing parents and their children as well as young adults to the showroom. The company is planning to hold regular events to coincide with other holidays, such as Christmas.