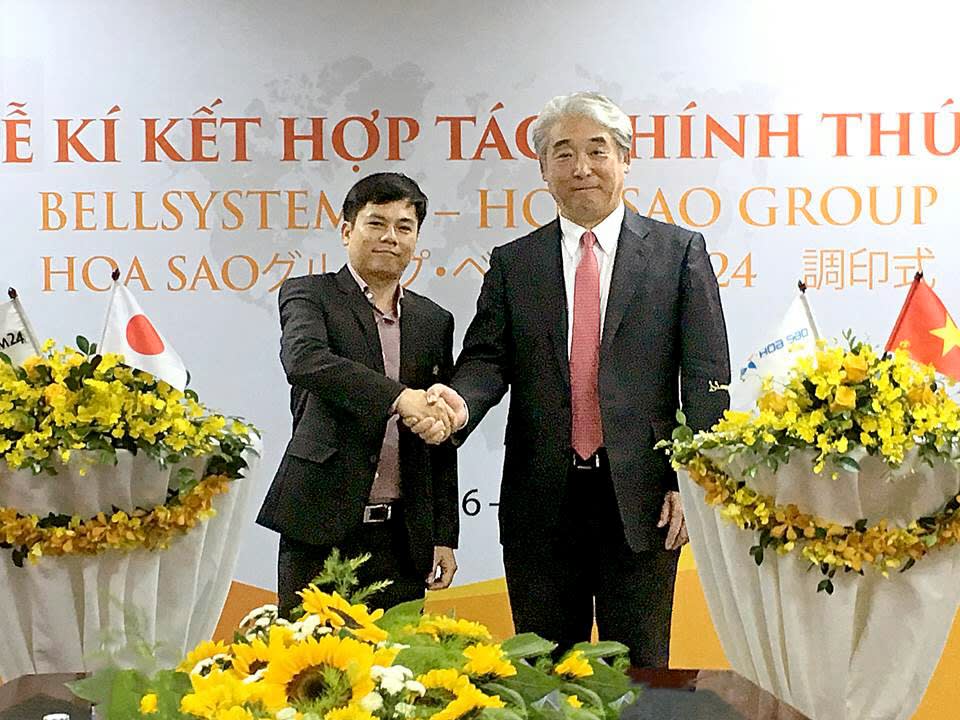 HANOI -- Vietnam has all the hallmarks of becoming a major business process outsourcing player in Asia, thanks to its low labor costs and growing pool of IT-savvy workers.

Bellsystem24, an outsourcing service provider owned by trading giant Itochu, has acquired a 49% stake in Hoa Sao Group, a leading Vietnamese call center operator, to expand its operations into the country.

With the investment, the Japanese outsourcing company is seeking to capitalize on Vietnam's advantages as a potential outsourcing hub, including a large population of workers with high IT skills who can be hired at lower wages than in China or the Philippines. Another key factor that could draw Japanese outsourcing businesses to the country is the more than 100,000 Vietnamese who are learning Japanese. Vietnam clearly has the potential to become a business outsourcing power like India and the Philippines.

Founded 10 years ago, the Vietnamese company now runs eight call centers with 3,000 operators. Hoa Sao wants to parlay its alliance with the Itochu group into an increase in its overseas customers.

Hoa Sao has started recruiting Vietnamese with Japanese language skills with an eye to winning contracts to provide call center services for Japanese companies through its partnership with Itochu.

The Vietnamese company will ensure its call center services for Japanese customers can handle both phone calls and online chat. The company plans to introduce artificial intelligence by next spring to enhance the chat capabilities of its services. The AI will be used to display multiple model answers to requests from customers so that operators can choose the most appropriate ones from the options. This system will make it possible to make effective responses to customer requests in a shorter time.

Hoa Sao is also betting that it can use the personal data about 7 million consumers in Vietnam to cater to Japanese customers' needs for advice over their sales promotion and marketing efforts in Vietnam.

There are only about 10 or so providers of business outsourcing services, including call centers, in Vietnam.

In Vietnam, the outsourcing industry has not grown as fast as in India or the Philippines because of relatively lower levels of English language skills among the people and a smaller population of highly-educated workers.

But the situation has changed dramatically in the past decade. The number of university graduates has more than doubled during the period, while the number of people able to communicate in English has been improving.

The country's most powerful attraction for Japanese businesses is the large number of Vietnamese learning Japanese. According to Justice Ministry statistics, some 180,000 Vietnamese were living in Japan as of June this year, making them the fourth-largest group of foreign residents in the country, following Chinese, South Koreans and Filipinos. The number of Vietnamese living in Japan has grown 240% since December 2012.

In particular, the ranks of Vietnamese working at farms and factories in Japan to acquire job skills have increased sharply. The number of Vietnamese students studying at Japanese universities and tourists visiting Japan have also increased significantly.

In September, the Vietnamese government started Japanese language classes at three elementary schools in Hanoi. Vietnam became the first Southeast Asian country where Japanese is taught at schools as the first foreign language.

FPT University, a private university operated by FPT, Vietnam's largest IT company, offers courses on both information technology and the Japanese language.

The company has opened an IT center for developing computer programs for its clients in the central Vietnamese city of Danang.

The center will be expanded into a huge software development hub with 10,000 engineers by 2020. It will also provide outsourcing services as well.

Japanese carrier KDDI has also set up a foothold for outsourcing services in Vietnam. In 2013, the company opened in Ho Chi Minh City a center to provide expert advice over the management of networks covering the entire Southeast Asian region through 24-hour operations.

Wage levels in Vietnam are still considerably lower than in China or the Philippines. The average monthly pay for general office workers in Vietnam's nonmanufacturing sector was $390 in January 2016, according to the Japan External Trade Organization. That represents about half of the figure for Dalian, China, where many call centers are located, where the average was $728, and 25% lower than that for Manila, at $517.

Bellsystem24 expects the acquisition of Hoa Sao to boost its sales in Vietnam to 3 billion yen ($26.3 million) next year.

But the budding market seems to have a good chance of rapid growth in the coming years, with companies from Japan, South Korea and other countries expanding their investments in the country.