Visitors from rest of Asia prioritized

TOKYO -- More than 90% of prefectural governments and major cities in Japan aim to boost the number of foreign tourists visiting their areas, a survey has found. Shrinking domestic populations means many areas can no longer rely on Japanese tourists' yen. 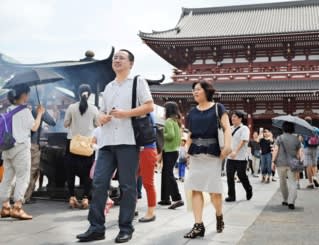 More foreign tourists, particularly from other Japan countries, are coming to Japan since the yen weakened.

The survey was conducted by Japan Travel Bureau Foundation, Yokohama College of Commerce, Takasaki City University of Economics and Japan Tourism Marketing. It analyzed how local governments view tourism and checked what measures they are taking in this field.

They distributed the questionnaire to all 47 prefectural governments, as well as the 20 ordinance-designated major city offices in the country between July and September last year. The survey had a 100% response rate.

Results show 57.4% of prefectural governments believe tourism is extremely important, and that 54.3% have boosted their budgets in this field. In addition, 62.9% said they had bolstered their tourism offices and personnel.

Meanwhile, 35% of the major city offices said tourism policy was extremely important and 55% said their tourism-related budgets had increased. Governments outside Japan's major urban areas intend to step up tourism promotion to reinvigorate their economies, according to the survey.

By category, 91.5% of the prefectural governments and 95% of the city offices cited inbound tourism promotion as one of their high-priority policies. A total of 52 local governments -- 39 prefectures and 13 cities -- chose Taiwan as the most important region. Some 44 municipalities cited Thailand, 37 South Korea and 32 China. Some municipalities cited France and Australia as targets as well.

On the question of priority measures, 80.9% of the prefectural governments said creating new products and enhancing their area's appeal was important. The number had nearly doubled since the survey was taken in fiscal 2010. Some municipalities are promoting local landmarks and trying to develop long-stay vacation destinations.

Tourism administration involves offering services for people from Japan and around the world. Many municipal governments struggle to find funding and personnel for dealing with the challenges at hand. It is also difficult to find people with adequate tourism promotion experience, the survey found.