Pop culture reigns supreme in the land of Pokemon and Godzilla A woman tries out PlayStation VR upon its release in October.
December 29, 2016 12:00 JST | Japan
CopyCopied

TOKYO 2016 has seen mega-hit games, movies and, for better or worse, YouTube pop sensations. Characters in the world of fiction have jumped out of smartphone and movie screens and changed people's behavior in real life. Crazes that started out among teenagers have spread across generations. Our sumo-style East-West banzuke ranking of what made headlines in Japan in 2016 looks back at what excited, what created passionate fans, and what broke boundaries.

The East yokozuna, or grand champion, could only be the smartphone game Pokemon Go. Using GPS information, the innovative game blends reality and the virtual world, with people chasing around trying to catch pocket monsters that pop up in streets, parks and just about anywhere. Pokemon Go caused a sensation across the globe, with the total number of downloads reaching over 500 million.

The hugely popular game has created a social phenomenon. Many people, from small children to the elderly, were engrossed, wandering around glued to smartphones. The game's huge economic ripple became known as "Pokemonomics," and included a surge in the stock prices of related companies.

The West yokozuna is the animated movie "Your Name." Director Makoto Shinkai's world, characterized by intricate scenery, appears almost real and has fascinated audiences. The town of Hida in central Japan, which the setting is said to have been modeled on, has been inundated by enthusiastic fans. They are there for a "holy sites tour," a pilgrimage to the buildings and scenic spots from the movie. The main theme song by popular band Radwimps also became a smash hit.

Initially most fans were teenagers but the much talked-about film has started gradually attracting wider audiences, including the middle-aged and the elderly. Its box-office revenue has topped 20 billion yen ($170 million), the second highest grossing Japanese movie after Hayao Miyazaki's "Spirited Away," which won the Academy Award for Best Animated Feature in 2003. "Your Name" has also become No.1 in other Asian countries by box-office revenue.

The East ozeki, the second-highest rank, is "Shin Godzilla" from renowned animated movie director Hideaki Anno, the latest of the Godzilla movies -- which were first produced 62 years ago. To add realism, detailed research was conducted on Japan's Self-Defense Forces and politicians, and more than 250 companies cooperated. Audiences were kept on the edge of their seats as the buildings destroyed in the movie so closely resembled their own workplaces. 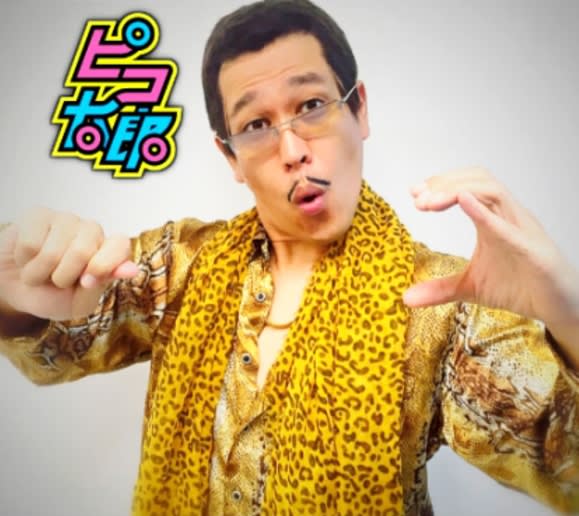 Pikotaro's "PPAP" went viral after it was posted on YouTube.

The East second-level ozeki is Pikotaro, who shot to global YouTube fame with his song "Pen-Pineapple-Apple-Pen." The catchy tune and funny dance went viral after Justin Bieber mentioned it in a tweet. Impersonations and other related videos were watched 860 million times and even made the U.S. Billboard Hot 100 chart.

Cutting-edge technologies that were once the stuff of science fiction are starting to appear in reality, and artificial intelligence gets ranked as the West ozeki. AI programs challenged and beat the world's top Go players. An AI program with the persona of a female high school student called "Rinna," developed by Microsoft Japan, has attracted 5 million users with its conversation service on the LINE instant messaging service and has received nearly 500,000 marriage proposals.

The East sekiwake and the West sekiwake also feature state-of-the-art technologies. The Nissan Serena minivan is equipped with an automated driving function. It self-drives at cruising speed on single-lane roads and expressways and automatically stops and starts while moving through slow traffic.

PlayStation VR is a virtual reality device used in conjunction with the PlayStation 4 console and costs less than 100,000 yen. The number of titles available for the device is expected to top 50 by the end of 2016. The head-mounted device ushers in a new era of high-tech games in which players can experience completely new worlds without leaving their sofa.

The East komusubi is Shohei Ohtani, the driving force behind Hokkaido Nippon-Ham Fighters becoming Japan's No. 1 baseball team for the first time in 10 years. The talented young pitcher, who doubles as hitter, keeps evolving. One of his fastballs clocked a speed of 165kph, making him the fastest pitcher in Japan, and he hit 22 home runs. He won the Pacific League MVP and became the first player named in the Pacific League Best Nine Awards as both a pitcher and designated hitter.

The West second-level ozeki is the Rio Olympics. Kaori Icho won gold in women's wrestling for the fourth straight time and Japan won silver in the men's 4x100-meter relay. Japan grabbed a record 41 medals in Rio. Tokyo will host the next summer Olympics in 2020 and the country's stage performance at the closing ceremony in Brazil generated a huge buzz, with memorable moments including Prime Minister Shinzo Abe appearing dressed as Super Mario. College students have fun with the Snow app.

The East maegashira's multiple slots include the Trump phenomenon -- the sensation caused by the outspoken billionaire's shock win in the U.S. presidential election. The West maegashira is led by the reforms being pushed by Yuriko Koike, the first female governor of Tokyo.

Japan will host the Olympics less than four years from now. Emulating a number of hit products seen in 2016, the country needs to make big strides in preparation for the event.