While audiences love the Bard of Avon, rulers may not be so keen 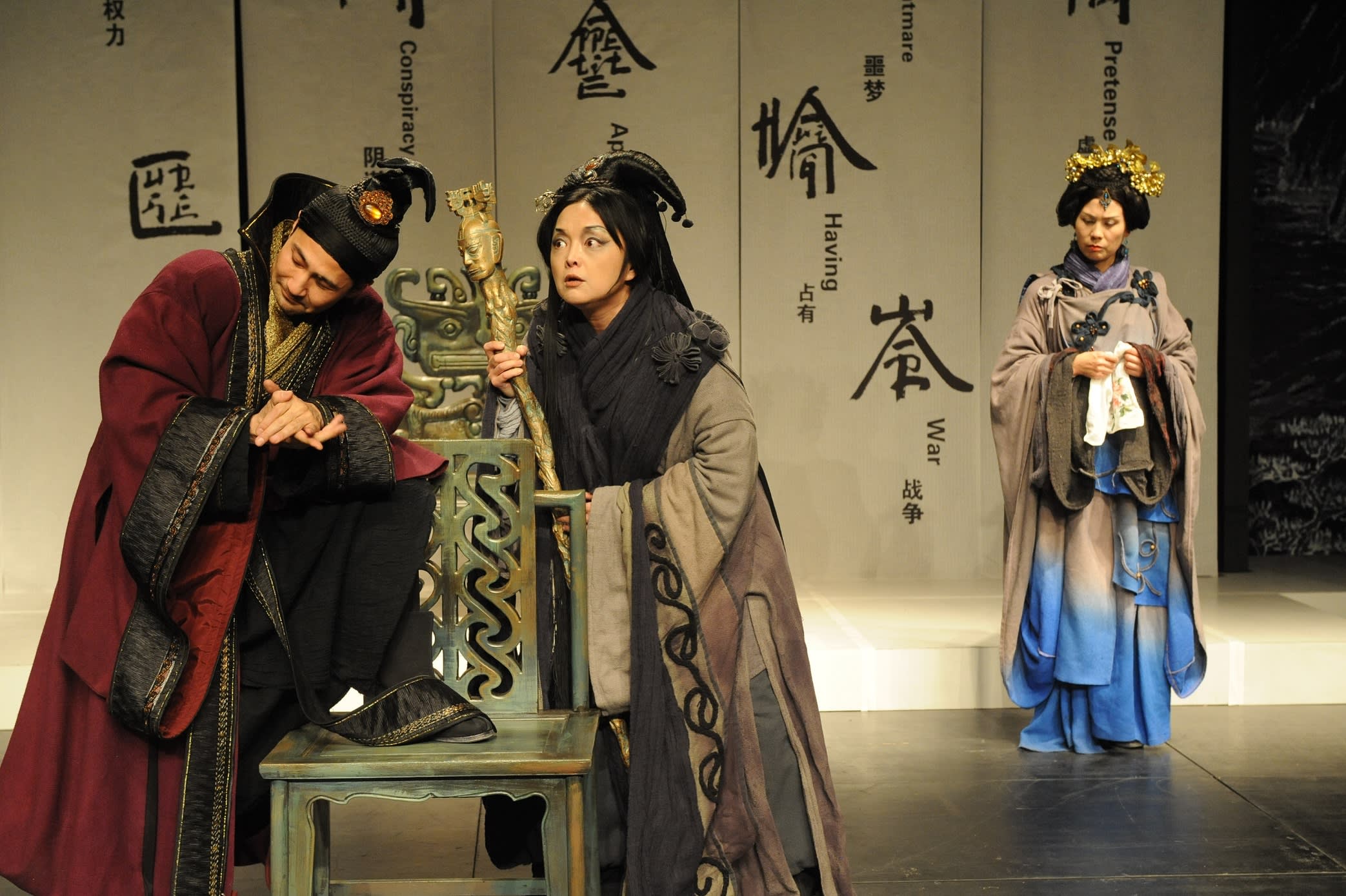 TAIPEI -- Four hundred years and 10,000 km lie between the plays of William Shakespeare and contemporary Asia. But playhouse crowds across the region have much in common with their 16th and 17th century English predecessors. They embrace the brooding prince from "Hamlet" and the capricious sprite Puck, from "A Midsummer Night's Dream," with equal zeal, and they share an uneasiness that political intrigues laid bare on stage could unsettle local rulers.

Asian audiences cannot get enough of Shakespeare, the English playwright from Stratford-upon-Avon whose many plays are widely regarded as among the greatest in world literature. Last year, a production of the fantastical comedy "A Midsummer Night's Dream" by a touring company from Shakespeare's Globe Theatre -- a reconstruction of the original London theater where many of the playwright's works were first performed -- enjoyed full houses in Taipei and Shanghai. In Taipei, a November production by celebrated Belgian director Ivo van Hove of "Othello," the tragedy of a general destroyed by jealousy, sold out in no time.

While  European productions of Shakespeare's plays are received in the region with fervent enthusiasm, Asian theater troupes are also keen to make the plays their own. The National Theatre of China's 2012 Mandarin production of "Richard III" -- the story of the rise and fall of a scheming and unpopular monarch -- replaced the terms and manners of the English court of Queen Elizabeth I with those of the Middle Kingdom. The production half morphed in to a Chinese period drama, with Peking Opera singing and acrobatics thrown in. In Japan, theater titan Yukio Ninagawa has long incorporated elements of traditional Japanese Noh and Kabuki techniques into his productions, achieving aesthetically mesmerizing masterpieces.

In the U.K., there has been an increasing interest in Asian productions in London as theaters invite international companies to showcase their interpretations of the great playwright. Meanwhile, the government is using the dramatist to spearhead efforts to enhance British soft power, including giving the Stratford-based Royal Shakespeare Company a grant of 1.5 million pounds ($2.3 million) to translate Shakespeare into Mandarin.

The Globe Theatre's "Globe to Globe" initiative -- which encourages international exchanges of the bard's works -- brought the Mandarin version of "Richard III" and a "Titus Andronicus" production in Cantonese, by revered Hong Kong director Tang Shu-wing, to London in 2012. "Richard III" will return to the Globe in July, followed in August by Tang's brand new version of "Macbeth," which deals with the downfall of a king who becomes a tyrant. Singapore Repertory Theatre's Shakespeare in the Park is a popular annual event. In 2013, they staged "Othello."

Taipei-based director Lu Po-shen has been working with Taiwan Bangzi Opera Company to produce Shakespeare in the hope of finding a fresh voice for the old Chinese craft of Bangzi, which interweaves ballads with storytelling, but is struggling with a limited repertoire. The company has adapted the comedies "The Merchant of Venice" and "Measure for Measure," and is planning to start work soon on "King Lear," the tragedy of a king who becomes mad in the face of loss.

"We hope to present Bangzi through Shakespeare, and that the genre can learn something original from Shakespeare, too," Lu said.

Tang, once the dean of drama at the Hong Kong Academy for Performing Arts, recalled that an Indonesian theater presented "Macbeth" a decade or so ago in traditional Gambuh dance style in an attempt to draw renewed attention to the ancient art form.

But the relationship between the English playwright and Asian theater is not a one-way street. Foreign elements can add extra layers of meaning to performances of Shakespeare in England, too. By dressing actors in kimonos in rich shades of red and gold, Ninagawa infused his Kabuki version of "Twelfth Night" at London's Barbican in 2009 with lush, festive colors.

Perng Ching-hsi, emeritus professor of English and Drama at National Taiwan University, said a successful blend of local milieu and mise-en-scene -- a theatrical term for stage design -- is essential for Shakespeare to rise above international borders. "Shakespeare is only globalized to the extent he is localized," Perng said. "Theaters need to sell tickets. If an audience feel they are alienated, they won't return."

While Shakespeare charms audiences across Asia, his politically potent texts can prove thorny for artists in a region with many authoritarian regimes. It is only too easy for high-strung dictatorial leaders to become paranoid about works portraying the downfall of kings and rulers, and ban the plays.

In Hong Kong, theaters understand that it is not the done thing to mention the names of contemporary local or mainland Chinese politicians in performances, according to veteran director Vicki Ooi.

American director Thomas Caron of Shanghai Shakespeare, a group dedicated to performing Shakespeare in Mandarin, said he is fully aware of subtle restrictions in China on referring -- or appearing to refer -- to the ebbs and flows of the fortunes of kings.

According to Caron, troupes in China still need to send recordings of proposed productions to a neighborhood cultural bureau to get permission for public performances. A few years ago, Shanghai authorities banned a production of "Hamlet," in which the entire royal family is killed, by Zulu, a now defunct expatriate group known for its radical political stance, said the American director. The company had tried to link the play to China's 2008 Sichuan earthquake.

"If you're trying to play out your own agenda, make some kind of political point in China by doing this play, I can see you're going to get into some kind of trouble," Caron said.

Dennis Kennedy, emeritus professor at Trinity College Dublin, and author of many books on the bard, noted that "Shakespeare Must Die," a 2012 film adaptation of "Macbeth" by Thai director Ing Kanjanavanit, was banned in Thailand because of fears that its references to contemporary politics could cause social turmoil.

Kennedy said Shakespeare's exploration of the often delicate hold on power exercised by kings can be sensitive for dictatorial governments across the world, noting the 20th century example of Soviet dictator Joseph Stalin banning "Hamlet" during World War II until his death. "It is not an exclusively Asian problem, though certainly there are Asian countries where it's a real issue today," Kennedy said.

Kennedy's view echoed revelations by renowned British director Nicholas Hytner in a 2013 lecture about the long history of subversion in theater, from self-censorship in modern Hungary to the "Richard II" production staged by The Lord Chamberlain's Men -- the troupe that first performed many of Shakespeare's plays -- on the eve of a failed rebellion against Queen Elizabeth I by the Earl of Essex, once her favorite courtier. 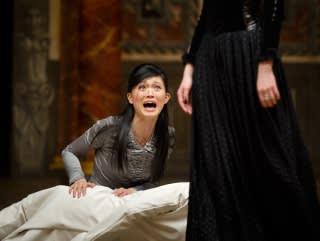 Shakespeare was only too aware of the danger of subversion on the stage, best reflected by the use of a play-within-a-play to re-enact the murder of the king in "Hamlet," Hytner noted.

A man for all time -- and all places

At the risk of provoking the ire of the authorities, performers in Asia have adopted Shakespeare with relative ease. Scholars say his pliable body of work allows local troupes to make the English playwright one of their own.

"The text is very malleable, flexible, and [the plays] don't come with a style attached. You can impose all sorts of different styles, including Chinese opera, onto Shakespeare. You can also do it in Kabuki style, you can do it Thai style in Thailand," said Kennedy.

Kennedy noted that Japan took to Shakespeare at the beginning of the 20th century because the Japanese at that time considered everything from the West to be modern. A similar sentiment later led China to Shakespeare, said Perng.

Shakespeare's prominence as a cultural icon at home also helped his ascension in other parts of the world as Britons shipped his works and his influence, to their colonial possessions in Asia and elsewhere. "When Britain was growing its colonies in Asia, it had to find some texts to help promote the English language, and Shakespeare was a natural choice as he had been the face of the British culture and language," said Perng.

For theater practitioners, the attraction of Shakespeare lies in the fundamental human emotions displayed in his plays, which extract visceral responses from people everywhere.

"Shakespeare's works are staged all over the world today, because of the poetry of the language and the very universal themes of the human condition. That basically hasn't changed over centuries: love, hatred, revenge, jealousy," said Charlotte Nors, executive director of Singapore Repertory Theatre.

"Shakespeare can appeal to people across the globe because he talked about common desires, emotions and views shared by human beings everywhere," Tang said. "In Macbeth's case, it is a tragedy about how people deal with their desire."

Wang Xiaoying, deputy director of the National Theatre of China, said local audiences responded well to scheming and murders in his "Richard III" production because the political intrigues in Shakespeare's portrayal of the English court happened all the time in ancient, recent, and even contemporary Chinese history.

"These twists don't just take place in courts. They are discernible in ordinary people's daily lives," Wang said. "There is no gap between what Shakespeare wrote 400 years ago about sinister elements in politics and humanity and the reality in today's world. He managed to transcend time because of his all-embracing depiction of humanity, desire and political struggle."

Upcoming Shakespeare productions in Asia, or by Asian companies in London:

"The Tempest" by Singapore Repertory Theatre, at Fort Canning Park, Singapore, April 29-May 10. Performance in English.

"Hamlet" by Yukio Ninagawa, at The Barbican in London, May 21-24. Performance in Japanese.

"Richard III" by the National Theatre of China, at Shakespeare's Globe in London, July 20-25. Performance in Mandarin.

"Macbeth" by Tang Shu-wing, at Shakespeare's Globe in London, Aug 17-23. Performance in Cantonese.

"Macbeth" by Thomas Caron. Oct 30-Nov 1. Location to be confirmed. Performance in Mandarin.