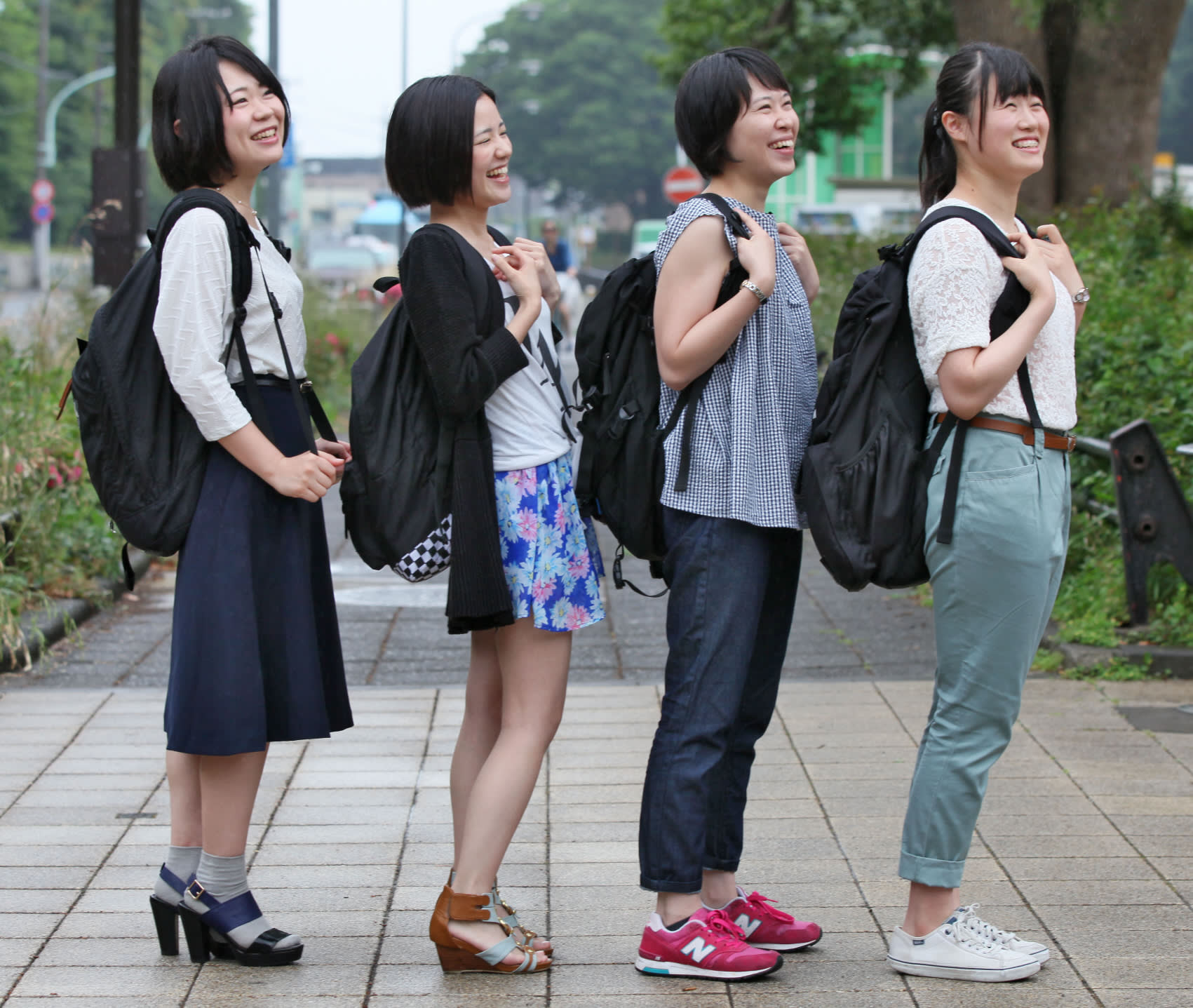 A growing number of young women are sporting the unpretentious style -- a play on the word normal with the -core suffix. This has helped launch a backpack boom. Various designs are available, but two types of bags are particularly popular -- kuro gotsu (bulky black) and goku mini (super mini). The two styles make people look slightly "out of sync" or "loosened-up." 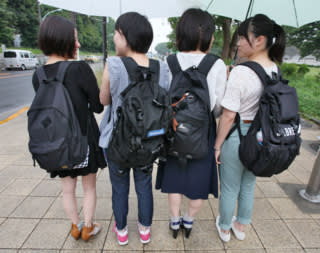 Bulky backpacks are catching on among young women.

A group of four university students all carry bulky, square-style black backpacks. Shizuki Sensui, a 21-year-old who lives in Yokohama, Kanagawa Prefecture, has been using a Sabre backpack, which costs about 10,000 yen ($80.44).

"A pair of sneakers and a black backpack are my standard items," she said. "The large size [of the bag] is comfortable; I feel like I am wrapped up in it." Backpacks also have an interesting effect on appearance. "Carrying a big pack makes a woman look delicate and slender," she said.

Yuka Sato, who lives in Tokyo, was wearing a white blouse and a navy-blue skirt, with a Gregory backpack slung over her shoulder. "When bulky backpacks are carried by beautifully dressed girls, it gives a mismatched feel, which I find kind of cute," she said. "My boyfriend told me I look more girlie with a backpack."

Black backpacks were previously designed with men in mind. But they caught on with women last year, as a more casual fashion style spread. Many women noticed black backpacks go well with any outfit. Popular brands include Burton, Manhattan Portage and The North Face. When there are not many things to carry around, small backpacks come in handy.

At Burton's Japanese flagship store in Tokyo's Harajuku area, the snowboard brand sells 15-20 backpacks a day on weekends. Nearly half of the buyers are women. "Classic-style backpacks for mountain climbing are popular, especially those where you can open the top," said sales representative Yoshimasa Kuroko. "There are also many couples who carry matching backpacks."

Bamboo Luna, a multi-brand store for women in Tokyo, was selling items mainly for full-scale mountain hikes but revised the product lineup in February and added more backpacks for city walks. Hyperlite Mountain Gear, a 30-liter backpack priced at around 30,000 yen, is among the strong sellers at the store.

Meanwhile, the so-called goku mini, which is not big enough to carry a magazine, is also becoming popular. Natsuko Wakasugi, a sophomore at a university in Kawasaki near Tokyo, also uses a small white pack she bought for 7,000 yen. She said she puts only essential items such as her purse in it. "I love the 'out of sync' effect of wearing a pair of sneakers together [with the small backpack]," she added. 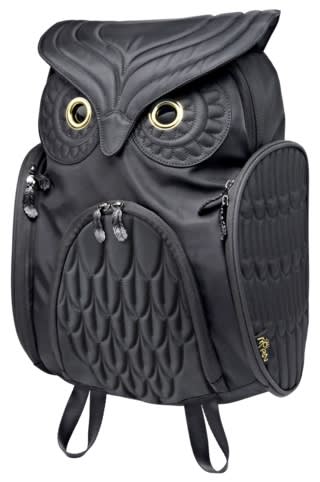 An owl-shaped backpack by Morn Creations

Small backpacks designed for adults that were in vogue in the 1990s are also making a comeback. Big-name brands, both in Japan and overseas, are expanding their lineups of such bags. Samantha Thavasa Deluxe's Omotesando Gates store has rolled out eight backpacks this year, double the number from 2014. Coach has offered backpacks in three color schemes. It plans to release bags in different colors for its autumn and winter collection.

Sales of backpacks at Sogo & Seibu have gone up by 30-60% on the year since January. Small leather types are particularly popular, according to an official at the department store operator. 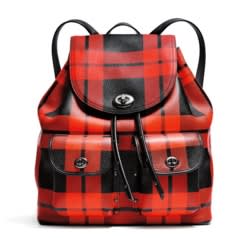 A new knapsack from the Coach autumn collection

Oddball designs such as animal motif backpacks are now available in stores as well. Sayuri Yamamoto, a bank employee in Osaka Prefecture, uses an owl-shaped, black pack by Morn Creations, a Hong Kong brand. It costs 20,000 yen before tax. "The patterns on the surface and the tags of the zippers are designed like owl's feathers," she said. "It is sophisticated and looks cool."

An official at Hug Factory, a Tokyo-based company that imports eight kinds of Morn Creations' backpacks including shark- and whale-shaped ones, said it sells about 3,000 owl backpacks annually. Women who want to stand out are said to be big fans of the bags.

"The era of sacrificing convenience for fashion is long gone; practicality is crucial today," said Mumi Misawa, editor-in-chief of mini, a casual women's fashion magazine. "The 'out of sync' fashion -- combining sporty and boyish qualities with more girlie items -- is the mainstream now."

Bulky packs tone down girlie fashion a little while compact backpacks add a feminine touch to boyish style. Backpacks are thus in fashion as the perfect item for young women wanting a well-balanced casual look.