A breakdown in trust is eroding Thai social cohesion

Overcoming public polarization will be a monumental task A pro-democracy protester prays during a demonstration in Bangkok in December 2020: the current Thai political conflict has a generational and ideological divide.   © Sipa/AP
CopyCopied

Polarization seems to be a mainstay in Thai politics. Social media and misinformation are exacerbating the deterioration of social cohesion and trust.

Thai people's declining trust in each other, government institutions and media are not only detrimental to social capital, but also make combating misinformation more difficult. This is dangerous enough in normal times. During a pandemic, it can be lethal.

The current Thai political conflict has a generational and ideological divide. Many young people have liberal values. To them, the current government, led by Gen. Prayuth Chan-ocha, is the result of a flawed democracy and the country's strict lese-majeste laws are an infringement on free speech. These sentiments exploded in a series of protests in 2020 and early 2021 that unprecedently challenged the Thai establishment, much to the disapproval of the older population. The older generations tend to be more traditional, hold the monarchy in high regard and are more tolerant of the Prayuth government.

This polarization has left behind an atmosphere of deep distrust of information and news sources that are from the other side. Mistrust has been growing for over a decade, since the Yellow and Red Shirt movements. With the rise of Facebook and Twitter, it becomes easier for each faction to deepen biases and negative associations of their opponents. This is not unique to Thailand, as countries like the United States and the United Kingdom also find that online echo chambers tend to expose voters to increasingly extremist content.

The Thai government is not only ineffective at alleviating distrust, but is actively adding fuel to the fire. Within the past year, Twitter and Facebook have removed hundreds of social media accounts with ties to the Thai military. These accounts are believed to be a part of state-funded information operations with the aim of increasing government support and undermining opposition leaders and movements.

With the spread of COVID-19, following a clear set of guidelines is vital to keeping infection rates low. Instead, many Thai people have become skeptical of their government and civic institutions, hindering correct public health practices and increasing vaccine hesitancy.

Polls conducted in May found that up to 64% of Thai respondents are willing to be vaccinated. These numbers are lower than those from Thailand's neighbors: 83% in Vietnam and 66% in the Philippines. Many Thais are of the opinion that the Sinovac and AstraZeneca vaccines procured by the state have "low efficacy," and are willing to wait for uncertain imports of Pfizer or Moderna vaccines. Delays in inoculation will have both economic and public health costs that Thailand cannot afford.

Poor government management is partly at fault. News networks and social media users are quick to blame each other for spreading "fake news" when in reality the government itself is responsible for announcing contradictory or confusing information.

For example, last month, Minister of Public Health Anutin Charnvirakul announced that he would allow "walk-in jabs" at vaccination centers but backtracked when the prime minister publicly opposed the measures. The lack of transparency surrounding the deliveries of the domestically produced AstraZeneca vaccines has led to panic about vaccine shortages in the middle of Thailand's mass inoculation program. 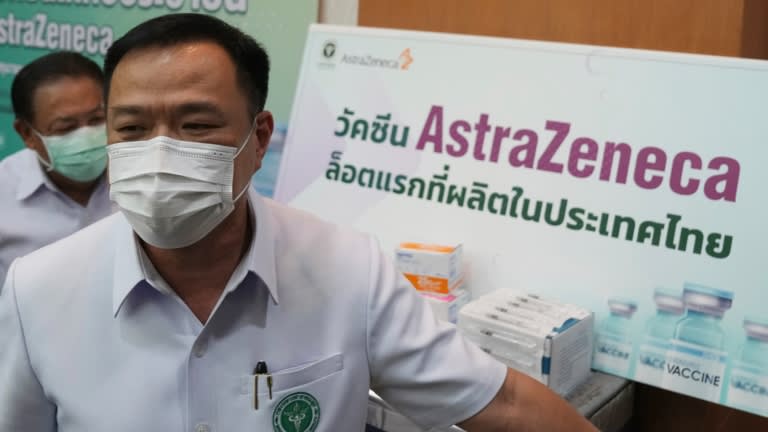 Anutin Charnvirakul talks to reporters on the delivery of first locally-produced AstraZeneca vaccines on June 4.   © AP

The more important factor is that political animosity has bled into other spheres of life, including public health. Regardless of qualification, any medical professional that is seen to be "on the other side" of the political conflict loses their trust.

The most prominent example of this phenomenon is Dr. Yong Poovorawan, who is an expert in virology and was part of the team that handled the outbreak of H5N1 bird flu in Thailand in 2004. He now helps the government tackle the spread of COVID-19 and often shares information on virus variants and vaccine efficacies on social media.

After pictures of Poovorawan at a PDRC protest surfaced -- the PDRC applauded the coup d'etat by Prayuth in 2014, his advice has come under scrutiny and suspicion by the anti-establishment faction. Similarly, when other medical professionals, such as respiratory disease expert Dr. Nitipat Chiarakul, express valid concerns such as in classifying COVID-19-related deaths and hospital bed allocation, their questions were portrayed as political attacks and quickly dismissed by government supporters.

It is imperative that the government improve its communication with the public to curtail misinformation and regain the trust of its people. In the short run, the state needs to be more transparent and straightforward. Less confusing information from official channels can at least keep some misinformation from widely circulating.

Daily updates on the number of vaccines procured, allocated and administered in each province is an easy first step. To regain public confidence in the long run, the Thai government must cease their information operations that only serve to deepen political divisions, as well as stop charging critics with defamation.

Overcoming public distrust will be a monumental task, but it is one that needs to be accomplished for the future of Thai social cohesion.