A debt alarm bell for Xi Beijing did not choose February 2019 for the moment when its great wall of IOUs became a flashpoint. But, sooner or later, a decade of fighting financial gravity, by means of epic debt issuance, catches up in any industrializing economy -- even China.

Two missed corporate payments this month dramatize the costs of that decision. Last year's 60% surge in insolvencies and a record $18 billion of defaults, up from $4 billion in 2017, point to a deepening credit crunch at a moment of maximum geopolitical peril. It will test President Xi Jinping's multitasking skills as never before.

U.S. President Donald Trump's trade war is proving that Asia's biggest economy is, well, not invincible. Since the 2008-2009 global crisis, Beijing made avoiding recession look easy. First with a 4 trillion yuan, or $590 billion, stimulus jolt. Then with aggressive central bank liquidity, waves of local-government debt issuance and regulatory tweaks to create a myth of invincibility. Beijing's pump-priming binge surpassed a cumulative $2 trillion by 2017.

In 2018, though, a hostile Trump found China's weakness: the debt-driven model was losing potency. The pain of slowing growth can be seen in Nikkei's calculation that some 30% of China's roughly 3,600 listed companies saw net earnings fall in 2018. Last year's top-line economic growth rate, meantime, was the weakest in nearly three decades.

This crack in the veneer of invulnerability built over 10 years limits Xi's options. What matters is not the next year but the next decade. It is vital that Xi stay focused on where China is headed long term.

There is growing optimism in the markets that Trump is desperate for a deal and may drop planned new tariffs. Currently, about $250 billion of mainland goods are being targeted. As the March 1 deadline for new levies approaches, detente may be in the air. Trump, it seems, realizes volatility in U.S. stocks, a direct consequence of the trade war, is damaging his standing with voters.

The good news for Xi: Trump probably does not grasp the extent to which he has Beijing over a barrel. As U.S. markets underwhelm and investigations swirl, Trump seeks a quick win. Getting Xi to agree to buy more American goods would give Trump a rare win on the international stage.

Xi should play along. The strongest Chinese leader in generations cannot afford to appear to bow to Washington. Yet there is scope to give Trump a moral victory in this one battle in order to win the bigger one -- for the future. As Sun Tzu wrote in "Art of War," it is wise to "pretend inferiority and encourage his arrogance."

That is exactly what worries investors like J. Kyle Bass. In a Feb. 11 Bloomberg Op-Ed with Daniel Babich, the Hayman Capital Management founder worries the Art-of-the-Deal president will let arrogance get in the way of epochal change. Going for a quick win, they write, "would mean foregoing a historic opportunity to come to a major restructuring of America's relationship with China at a moment when China is most inclined to agree to concessions."

The real issue is Beijing's unfair playing field for foreign companies, huge subsidies for national champions and the chronic theft of intellectual property rights. Anything short of dismantling this system makes Trump's tariffs a sideshow. And Xi knows it.

In the interim, though, Xi is left with limited policy choices. The trade war betrayed the hollowness of China's 6.6% growth in 2018, the slowest annual performance since 1990. The cost of maintaining rapid growth is increased pressure on an already over-leveraged financial system. And a system that continues to lean in the wrong direction.

In recent years, Xi pledged to let market forces play a "decisive" role in decision-making. A key element of that push is to close all zombie state-owned enterprises by 2020. And yet, indications are that Beijing is propping them up at the expense of private-sector development.

As Nikkei and others reported, most of the Chinese companies suffering big earnings drops in 2018 were small-to-midsize private ones. These, it is worth noting, are the corporate species any nation keen on raising its competitive game should be cultivating. Because they have less access to capital -- or government largesse, more to the point -- they are disproportionately getting tripped up by Xi's crackdown on the shadow-banking industry.

Not surprisingly, private companies accounted for roughly 126 of 165 defaults in 2018, says Guotai Junan Securities. On top of that, as Reuters pointed out in a Feb. 12 expose, banks have become reluctant to lend to the nonstate sector without a guarantor. So, in recent years, so-called cross-guaranteeing, wherein a friendly company backs the loans of others, has grown in popularity. This means that any one loan going bad can trigger a domino effect of defaults.

Both companies went overboard issuing debt to maintain growth. Wintime, for example, quadrupled its IOUs in less than five years. As gross domestic product slows, and strains increase, China Minsheng and Wintime stand as microcosms of where Beijing finds itself in 2019.

No one thinks Xi is about to let Chinese GDP drop into the 5% range. And at some point Beijing's Trumpian nightmare will end. When it does, where will Xi's "China Dream" be? At the core of his hopes of raising China's innovative footprint and living standards is his "Made in China 2025" scheme. 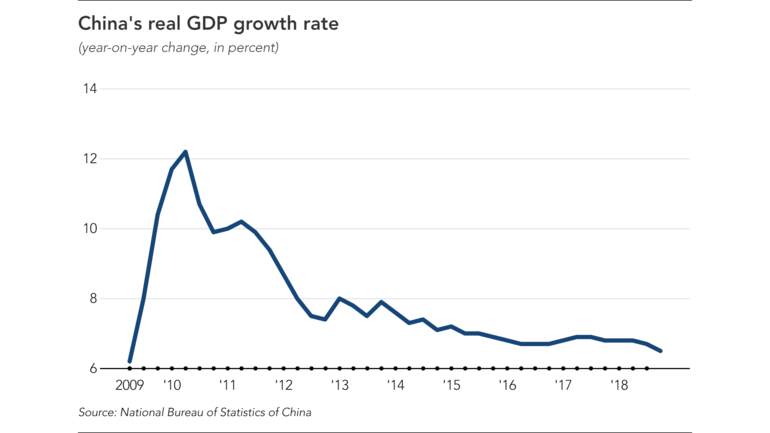 That requires a vibrant private sector. While Xi team stabilizes growth, it must accelerate efforts to cultivate new generations of startup unicorns to transform top-down China into an innovative powerhouse from the ground up. As GDP slows, and Xi's men circle the wagons, the temptation will be to support state-owned champions.

Xi must ensure that any new stimulus, including from the People's Bank of China, is aimed directly at a private sector bearing the brunt of slowing growth. Any steps to smooth over cracks in the $11 trillion bond market must not be squandered on a state sector holding China back.

That would be Beijing's own version of a quick win. It will not get Xi any closer to his dream of a competitive China. More likely, it will leave Beijing with an even bigger financial nightmare. The Chinese president should not ignore the warning implicit in this month's two corporate debt defaults.