A decade later, 3/11 disaster a testament to US-Japan alliance A U.S. Navy helicopter pilot presents a teddy bear to a baby during Operation Tomodachi on Mar. 22, 2011: the way the U.S. stepped up to help Japan brought humanity to life.   © AP
CopyCopied

Today marks the 10th anniversary of 3/11: the Mar. 11, 2011, earthquake and tsunami, and nuclear disaster that devastated the Tohoku region of northeastern Japan.

Today, as our world endures a pandemic, Japan's resiliency and the generous support of nations and peoples in that time of crisis gave us a beacon of hope, and emphasized the strength and importance of the U.S.-Japan alliance now and for the future.

Like everyone with a connection to Japan, I remember where I was on 3/11 and that has shaped my life ever since. I woke up that Friday morning to terrifying images of great waves and destruction, fearful that my parents, who serve as missionaries to Japan and were supposed to be in that region, had been affected.

My fear turned to panic when I could not reach them by telephone and reports came in about the nuclear fallout from Fukushima. On the eve of my 30th birthday, I had traveled to Florida to celebrate with family and friends. Instead, my heart was broken for Japan, my adopted homeland, witnessing the stoic resiliency of the people of Tohoku who faced such utter devastation. Thankfully, I was finally able to reach my parents and found they were safe and already heading to the region to help with relief efforts on behalf of the Christian community. But many were not so lucky.

On Mar. 11, 2011, the way that the U.S. stepped up to help Japan in an unprecedented time of crisis brought humanity to life from the formalities of treaties and mutual understanding. Within 24 hours of the earthquake, following a late-night phone conversation between then Prime Minister Naoto Kan and President Barack Obama, U.S. military forces began their largest-scale disaster relief and rescue operations with the Japanese Self-Defense Forces through Operation Tomodachi -- "Operation Friend."

The American government sent so many experts to offer specialized assistance, especially with the Fukushima nuclear meltdown, that the U.S. Embassy staff in Tokyo grew by 150 people. Scientists who came to offer their expertise have in turn developed years of personal connections and friendships, creating a network of friends and colleagues that facilitated communication far beyond the government level that have endured to this day.

In New York, as news of the triple disaster unfolded, Japan Society President Motoatsu Sakurai took swift and decisive action to provide support to Japan. The morning of the day after the earthquake, Japan Society launched the Japan Earthquake Relief Fund, which raised over $14 million from over 24,600 donors from all 50 U.S. states and 55 countries. That is the largest amount raised for a nonprofit not specializing in disaster emergency relief, even after including organizations such as the Red Cross. 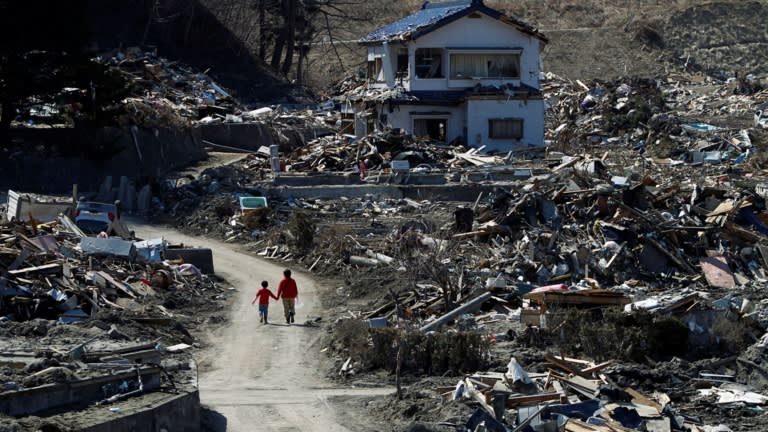 An area that was damaged by the earthquake and tsunami in Miyako, Iwate prefecture, pictured in April 2011.   © Reuters

Ten years later, these funds have been distributed to over 45 different organizations and institutions, supporting more than 60 projects that have directly benefited people in Tohoku and the entire region. Grants from the fund were used for immediate disaster relief in the aftermath and also -- in the bigger picture -- helped with Tohoku's mid-to-long-term recovery, including support for mental health, community revitalization, social entrepreneurship, education, and the arts.

Today, we remember those who were lost and extend our appreciation to all who helped with Japan's relief and recovery. We also commemorate Tohoku's resiliency, the bravery and initiative of everyone who responded to unprecedented challenges, the strength of U.S.-Japan relations, and human generosity and goodwill. From these accounts, there are lessons learned that can be used in our response to the current pandemic and for the rebuilding of the world to come.

The outpouring of 3/11 support from the United States was heartwarming and extraordinary, including a third-grader in New York whose drawing of two hands meeting across the Pacific is still treasured today by Ambassador Kanji Yamanouchi, Consul General of Japan in New York, one of seven guests I interviewed for a video series focusing on 3/11 witnesses.

On the other side of the ocean, retired General Ryoichi Oriki experienced 3/11, who led the Japan Self-Defense Forces' response to the disaster, and witnessed the strength of the U.S.-Japan alliance, invoked the phrase a "friend in need is a friend indeed." The general recalled the reactions of the elderly and children in Tohoku toward U.S. military personnel helping the region, noting "you could see the respect and appreciation in their eyes."

Ambassador John V. Roos and his senior adviser Suzanne Basalla, who were at the U.S. Embassy in Tokyo on the day of the disaster and became the organizing presences behind Operation Tomodachi, named in honor of the long-standing friendship between the United States and Japan that was reinforced in this moment of need.

"The alliance between our two countries is phenomenal, but it goes so much deeper -- it's the connections between the people. All this is critical to the U.S.-Japan relationship, and also to the area of the world that is going to drive the future of the 21st century," Ambassador Roos told me.

As for myself, I have never been the same since 3/11 in my determination to further U.S.-Japan relations in service of humanity -- just as we saw in the immediate aftermath of the tragedy that we are commemorating a decade later.