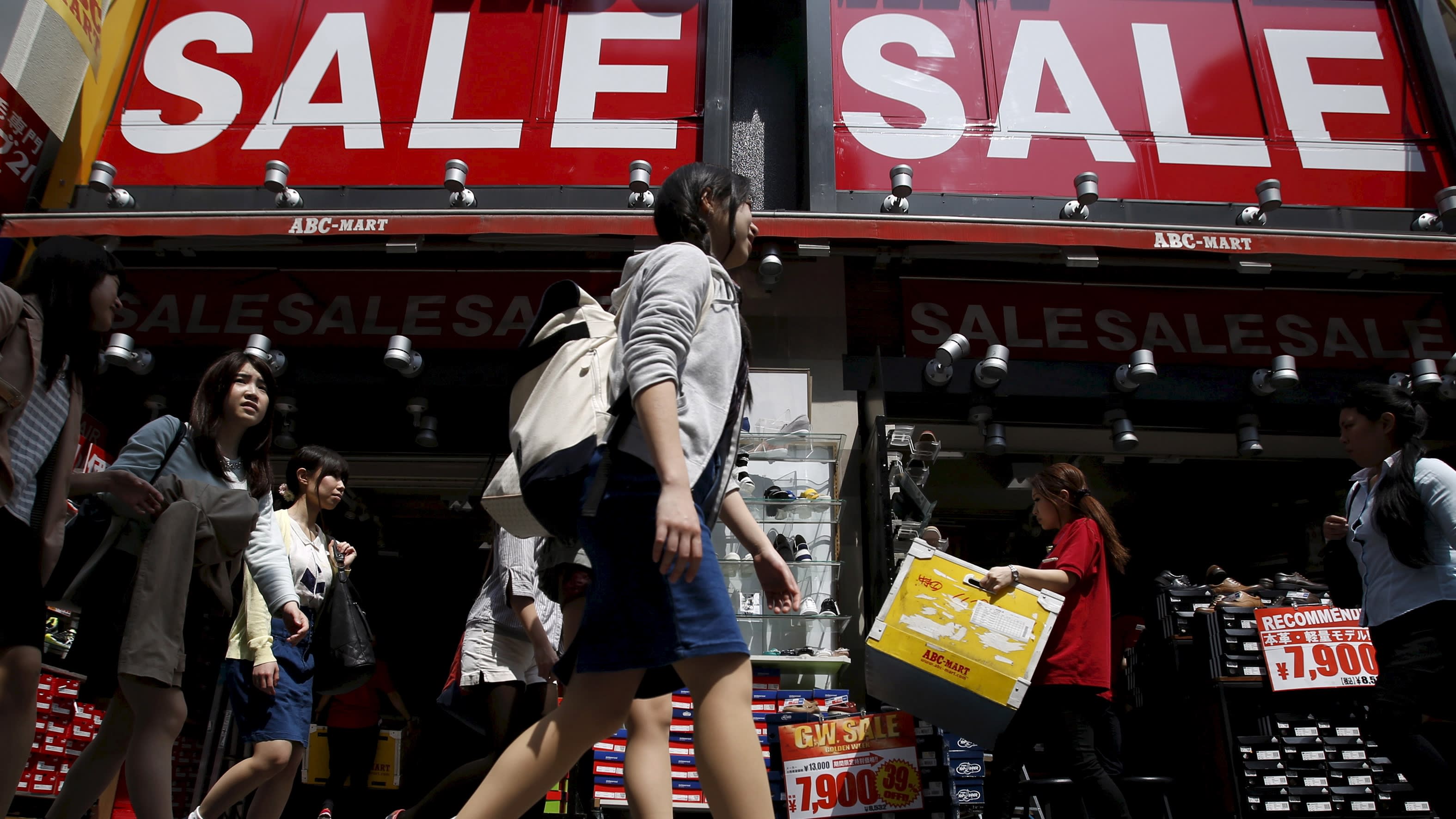 Don’t expect 2019 to be better than 2014, when a tax hike cooled consumption and necessitated more government spending.   © Reuters
CopyCopied

Shinzo Abe has announced a blunder Japan will regret.

The prime minister's decision to raise sales taxes again in October 2019 is being couched in confidence. After two delays, the economy is judged, finally, to be lively enough to withstand a bump to 10% from 8%. Coming atop the 2014 hike to 8% from 5%, the step will, supposedly, help fulfill Tokyo's pledge to pay down debt.

But, most likely, it will be remembered as a blunder.

To be fair, Abenomics has been on a roll in the past few months as growth, exports and corporate profits perked up. In June, Japan even recorded the biggest jump in inflation-adjusted real wages in 21 years, cheering global investors who propelled the Nikkei Stock Average to its highest in 27 years.

But, looking to the future, and Abe's timing is dismal. The outlook is clouded by the fallout from Donald Trump's intensifying trade war. Headwinds are fast strengthening against Abe's exports-reliant revival, prompting analysts to revise predictions. The BOJ's policy board, for example, now expects 0.8% growth in fiscal 2019, roughly half its 2018 estimate. The International Monetary Fund puts 2019 growth at 0.9%.

Now, add the specter of a stronger yen to the mix, making those projections look overly optimistic.

Last week, Trump's Treasury Secretary Steven Mnuchin signaled that the U.S. will demand a no-currency-manipulation clause in trade talks with Tokyo. That is Trump-speak for "the yen must rise." And it is nothing short of an existential threat to Abenomics. Its modest success since 2012 owes much to the yen's 30% decline against the U.S. dollar.

For six years, Abe enjoyed a pass on depreciating the currency. Protecting that perk was a big part of his November 2016 sprint to Trump Tower to pay tribute to the then president-elect. There have since been a few touchy moments as Trump complained about a strong dollar on Twitter, but nothing to sour Japan Inc.'s mood. That is about to change.

At home, Trump is frustrated at not getting more political credit for a booming economy. Nor are his tariffs on steel, aluminum and $250 billion of Chinese goods having the intended effect on stagnant wages. Angered by scandals, investigations and Saudi intrigue, Trump is desperate for foreign policy wins.

He is looking to pal Abe for a trade deal. Given how obsequious Abe has been, the president has every reason to think Tokyo will fold on exchange rates.

At a minimum, this challenges the Bank of Japan's view that the economy is ready for less stimulus. Governor Haruhiko Kuroda is hinting -- again -- that conditions may be ripe to reduce the BOJ record buying-binge. Yet the slightest whiff of tapering could send the yen skyrocketing and upend a slumbering government bond market.

The BOJ, after all, is only about halfway to the 2% inflation target. It is also the main buyer supporting the stock market. While Abe's corporate governance upgrades and trade policies helped boost profits, Kuroda's largesse has played a bigger part in the Nikkei's return to 1991 levels. Its 75%-plus ownership of exchange-traded funds means Kuroda's team is stuck with stakes it cannot unwind without triggering losses.

All this makes you wonder why Abe would pick now to hold another fiscal tightening over Japan Inc.'s head. You would think executives at Toyota Motor, Fast Retailing's Uniqlo chain and SoftBank have enough worries already. Now, they face the specter of another 2014-like downshift in national demand.

Far from communicating confidence, higher sales levies signal a failure of imagination. Abe, after all, has had nearly six years of firm coalition support and decent public approval ratings to raise living standards.

Voters supported Abe's return to power 2,122 days ago to make Japan's economy great again. Abe pledged to upend a rigid labor market, spur innovation, empower women and stop a risk-averse bureaucracy from choking competitiveness. Instead, he passed most of the job to the BOJ and pivoted to his pet national security projects.

A weaker yen dovetailed with a rare synchronized global recovery. Yet the longest expansion since the 1980s and swelling corporate coffers are not trickling down as hoped. Had Abe acted boldly to revitalize job creation and competition, tax revenues might be surging. Had his team incentivized startups rather than lavishing corporate welfare on established giants, wages might be swelling enough to shore up public finances.

Hiking taxes to deal with rising social welfare and debt-servicing costs could backfire. It further burdens a deflation-plagued workforce and may just depress spending. It is also a reminder than Abe is treating the symptoms of Japan's malaise, not the causes.

Posterity may judge the 2019 hike no better than that of Ryutaro Hashimoto, who in 1997 scuttled a recovery with ill-timed fiscal tightening. Back then, quips abounded about Herbert Hoover as Prime Minister Hashimoto raised the sales tax to 5% from 3% amid bad-loan troubles and a budding Asian financial crisis. Hashimoto chafed at comparisons to the U.S. leader who deepened the Great Depression with terribly timed austerity.

Japan is in considerably better shape than in Hashimoto's day. But within four months of Abe's April 2014 tax bump, the economy suffered its most abrupt contraction since the giant 2011 earthquake. By December 2014, the ruling Liberal Democratic Party was rolling out a $30 billion stimulus, the first of several fiscal and monetary jolts. A tax measure aimed at curbing runaway government debt necessitated even more borrowing.

Today, Japan's debt-to-gross-domestic-product ratio is 253%, the largest burden anywhere. It was 149% in 2014, which raises questions about what that year's tax boost was all about.

Skeptics should ask why Abe thinks the 2019 step will turn out better? Plans to offer more affordable education are laudable. But Abe has no clear plan to earmark the proceeds. Might they just go toward the 2020 Tokyo Olympics?

If there is any sense in the Tokyo government, Trump's assault on trade and desire for a weaker dollar should push Abe's party to mull a third delay in a 10% sales tax.

Abe has had enough time in power to make Japan more competitive. Sadly, though, he has spent more energy since 2012 plotting how and when to burden consumers than engineering vibrant and sustainable growth.

In life, as in soccer, the way to a brighter future begins with avoiding the defeats of the past. Why, then, plan for another own goal?