ASEAN must counter Chinese attempts to own RCEP trade agreement

Multilateral trade agreement will shore up the group's Asia centrality 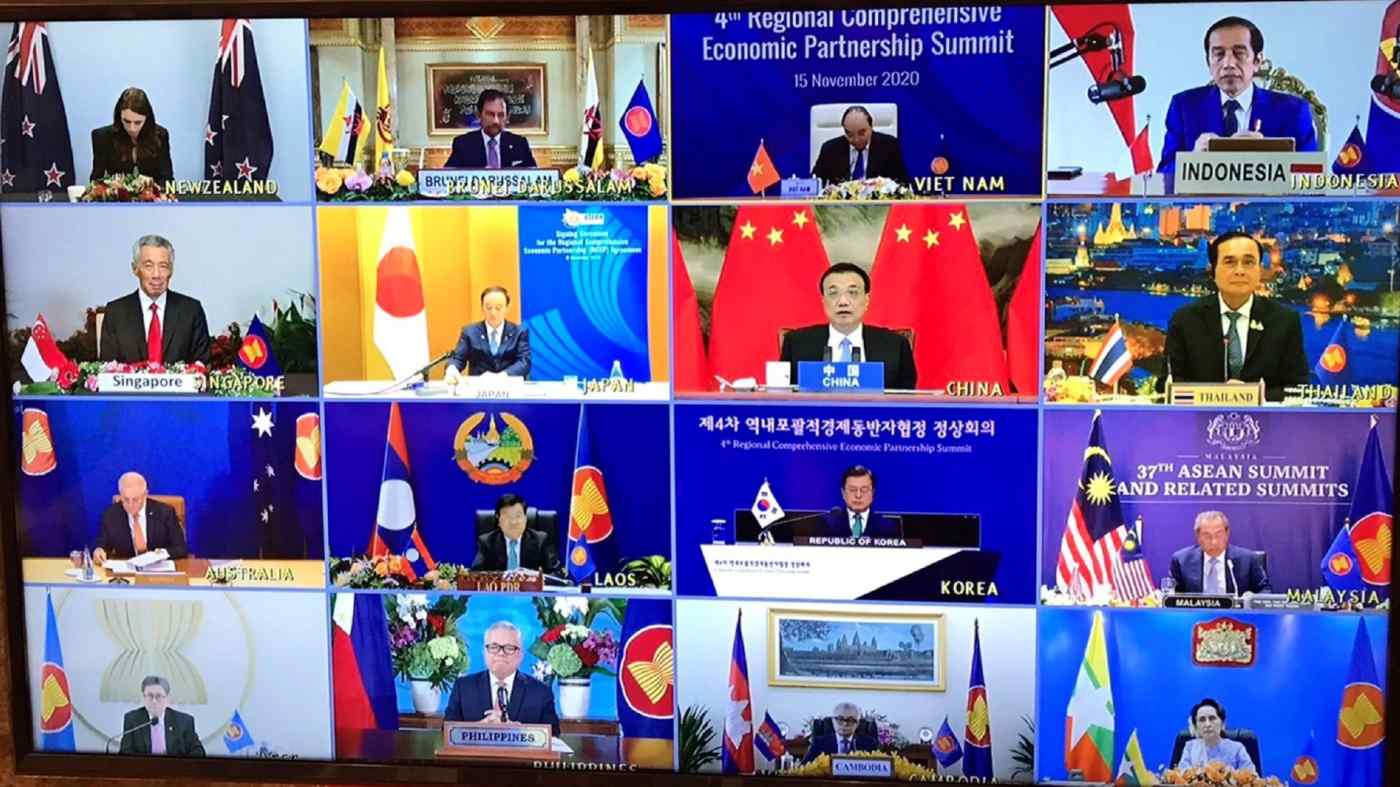 A virtual meeting of leaders from 15 RCEP member countries, pictured in Hanoi on Nov. 15: the impetus came from ASEAN. (Photo by Tomoya Onishi)
CopyCopied

Marty Natalegawa is a former Indonesian Foreign Minister and author of "Does ASEAN Matter?: A View from Within"

It has become a common refrain among some commentators that the recently concluded Regional Comprehensive Economic Partnership -- accounting for about a third of the world's population and trade -- was "China-initiated" or is "China-led." Nothing could be further from the truth.

The genesis of RCEP can be traced to the 19th summit of the 10-member Association of Southeast Asian Nations in Bali in 2011, when a framework was first adopted. That established a process under which ASEAN discussed a regional economic agreement with its preexisting free trade partners that could lead to an even wider comprehensive economic agreement.

A year later, ASEAN leaders and their counterparts from Australia, China, India, Japan, South Korea and New Zealand adopted a joint declaration for RCEP that optimistically envisioned an agreement by the end of 2015.

Since then, ASEAN has chaired and navigated eight years of tortuous negotiations, encompassing complex and highly detailed issues as relations between ASEAN and its partners ebbed and flowed. The biggest casualty of the talks was India, which opted out of RCEP in the final stretch.

For some, the narrative of ASEAN demonstrating its anchoring role in the wider region through RCEP is not as compelling as the suggestion of a region consumed by Sino-American rivalry. It may be that RCEP's subsequent development will be increasingly China-dominated. This is a risk ASEAN faces with the East Asia Summit and other processes it has initiated. To counter it, ASEAN must take ownership of RCEP.

Still, such an outcome would be contrary to the often unspoken rationale behind ASEAN's push for RCEP. While motivations may have differed among individual nations, Indonesia's perspective on RCEP has always been clear. While economic considerations dominated, geopolitical considerations were never far from Jakarta's mind.

During protracted negotiations, there was a recognition that potential partnerships such as a trade agreement between China, Japan and South Korea, would exclude and marginalize ASEAN. Having brought these three countries closer following the 1998 Asian financial crisis through the ASEAN+3 process, such a development would have been quite galling to ASEAN.

Even before the RCEP initiative, proposals for regional trade structures abounded, including the East Asia Free Trade Area and the Comprehensive Economic Partnership in East Asia. The former was too limited and never won broad support. The latter, closely linked to Japan, had wider appeal, not least in Australia, India and New Zealand. But neither proposal provided an assurance of ASEAN centrality.

Another initiative, the Trans-Pacific Partnership, was of particular note. For Indonesia, RCEP was a deliberate rejoinder to the burgeoning interest in the TPP among some ASEAN member states, including Brunei, Malaysia, Singapore and Vietnam. Indonesia believed that ASEAN should maintain a common approach to the evolution of the region's economic architecture. RCEP was therefore a response by ASEAN leaders to a series of initiatives that did not provide for ASEAN centrality.

There was also the vital matter of the broader Indo-Pacific perspective. For Indonesia, security and prosperity needed to be assured through a "dynamic equilibrium" in which neither China nor the U.S. dominates the region. The solution entailed an inclusive "common tent," with ASEAN at its heart as an adroit manager of the regional common interest.

The clearest manifestation of this idea was the East Asia Summit, which in addition to the 10 ASEAN members included China, Japan and South Korea, Australia, New Zealand, India, plus the U.S. and Russia. For Southeast Asia, being more inclusive helped secure ASEAN's centrality. Seen from this perspective, it was no accident that RCEP's original framework did not limit itself to ASEAN's free trade agreement partners, but foresaw the inclusion of others, including the U.S. and Russia. India's absence is a significant defect that inhibits RCEP's capacity to address the obvious shortcomings of the Asia-Pacific Economic Cooperation framework, which also excludes India. The key point, however, is that RCEP was not China-initiated. The impetus came from ASEAN.

The final RCEP agreement is a testament to what ASEAN can achieve with the requisite thought-leadership and diplomatic perseverance -- all the more remarkable given distaste for multilateralism in the pandemic era.

Having taken the lead to launch a process that created the world's biggest trade deal and a historic opportunity to transform the often disparate interests of Southeast Asian countries, ASEAN must continue to secure leadership of RCEP's implementation. This will require a continued sense of common purpose. Not least, the grouping must continue to leave the door ajar for India, as well as the U.S. and Russia.

Indeed, as President-elect Biden's foreign policy team takes shape -- including the nomination of Anthony Blinken as Secretary of State, Jake Sullivan as National Security Advisor, and Linda Thomas-Greenfield as ambassador to the United Nations -- there are signs that the U.S. will go back to being more regionally engaged.

Perhaps, in the same way that patient and painstaking diplomatic efforts by ASEAN convinced the Obama administration to join the East Asia Summit in 2011, the same may hold true for RCEP. An inclusive RCEP may yet enhance the prospects ASEAN centrality in the wider region's dynamics.