ASEAN must mitigate war without weapons between US and China

As their trade and technology tensions spread into currency manipulation, the geostrategic rivalry between the U.S. and China is fast becoming a nonmilitary war. It is no longer about trade tariffs and proprietary technologies but involves the full range of mercantilist practices to counter an adversary.

While this titanic tussle is reminiscent of the U.S.'s conflict with the Soviet Union in continental Europe half a century ago, the confrontation between Washington and Beijing is fundamentally different.

Its major theater of competition is Southeast Asia, where ASEAN's mitigating role will be paramount and indispensable. If ASEAN fails in keeping the U.S. and China from fully going after each other, Asia will likely become a region of every nation for itself, deprived of peace and prosperity and susceptible to open conflict.

Whereas the U.S. and Soviet Union took their ideological battle into proxy third countries without direct military clashes, the U.S.-China fight is direct but nonmilitary. Their economies are densely enmeshed, not separated into competing blocs like the past.

A critical issue will be how long the conflict remains nonmilitary. As China knows that economic prowess is not enough and that military might will be necessary, Beijing has undertaken an unprecedented arms buildup and military modernization programs.

Aware of this, the U.S. under the Trump administration and beyond will likely maintain its military preeminence, including an unmatched fleet of aircraft carrier groups that continue to dominate the seas, as economic statecraft may fail to impede China's momentum as a rival global superpower.

As China needs time to strengthen its military capabilities, particularly the production of more aircraft carriers, it will have to do its battle in trade and investment, technological innovation and deft diplomacy. 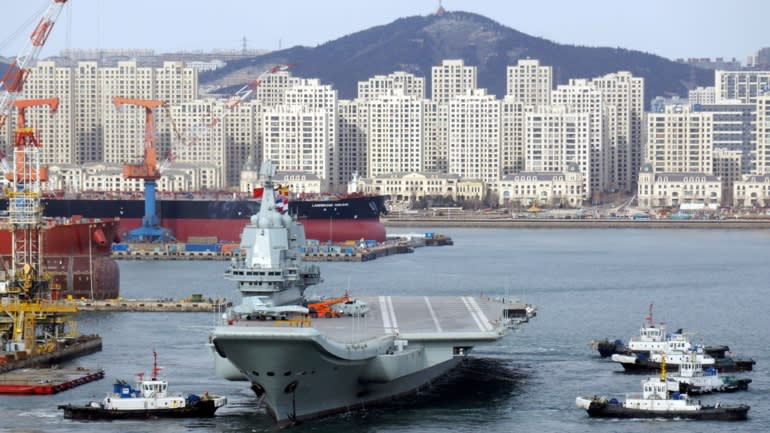 Its premier geostrategic platform is President Xi Jinping's Belt and Road Initiative, launched in 2013. If fully realized, BRI would enable China to become a Eurasian superpower with a global sphere of influence encompassing Asia and the Middle East to eastern Africa and maritime borders of Europe.

On the other hand, the U.S. has codified a "free and open Indo-Pacific," or FOIP, geostrategy into its national security and national defense strategies, effectively to curtail BRI and check China's superpower ambition and assertiveness.

The widening U.S.-China nonmilitary faceoff coincides with fluid rifts and realignments on Asia's geopolitical scene. Deep-seated enmity has resurfaced in trade friction between Japan and South Korea. The Trump Administration has become so unreliable that U.S. patronage and mediation over its two crucial Northeast Asian treaty allies have been ineffectual.

China's BRI and the U.S.-led FOIP, in conjunction with strategic moves among other powers, pose a conundrum for the smaller states in ASEAN, a key superpower battleground.

ASEAN maritime states, particularly the Philippines and Vietnam, have opposed Beijing's unilaterally-built and weaponized artificial islands in the South China Sea, while China's dams on the Mekong River have been detrimental to downstream countries, particularly Cambodia and Vietnam.

Grappling with the China challenge in view of the U.S. offensive, Southeast Asia's regional grouping has come up with the "ASEAN Outlook on the Indo-Pacific," or AOIP, to pacify and disarm both superpowers.

It highlights ASEAN's Treaty of Amity and Cooperation as guiding principles for cooperation and the East Asia Summit, which includes both the U.S. and China, as a sufficient mechanism for superpower dialogue and understanding. The AOIP promotes "freedom" of navigation and overflight and "free trade" agreements, such as the Regional Comprehensive Economic Partnership, but not the "free and open" language of FOIP.

Many will be exasperated and frustrated yet again with another declaration that contains practically everything but says next to nothing, except that ASEAN should remain the front and center of regional action and coordination to keep powers from outright conflict.

ASEAN itself has to own up to its deficiencies if its AOIP is to be taken seriously by powers outside Asia. Accustomed to being the default platform for regional structures and a factory of acronyms, ASEAN's credibility and centrality require more cohesion and less division.

Cambodia, for example, has seemingly protected China's interests in ASEAN's backyard when it comes to the South China Sea -- at the expense of neighboring Philippines and Vietnam. Such division from within must stop. If the big powers pick apart ASEAN, the smaller regional states will lose their collective autonomy.

But the bigger powers would be no better off because, at a time of heightened tensions between the U.S. and China, ASEAN's role as buffer, broker, bridge, and builder of mutual confidence and consensus is needed now more than ever.