ASEAN must use diplomacy to defuse US-China tensions

Annual meeting in Bangkok should reconcile, not aggravate, geopolitical feuds ASEAN might not be up to the challenge of calming the situations flaring up across the region.   © Reuters
CopyCopied

This year's annual meeting of foreign ministers from the Association of Southeast Nations, taking place in Bangkok now, has assumed greater significance than normal as U.S.-China friction has intensified and new tensions developed elsewhere in the region.

Making the meeting all the more important will be the presence of foreign ministers from ASEAN's "dialogue partners" -- the U.S., China, Japan, South Korea and Russia -- at the East Asia Summit and the ASEAN Regional Forum in the Thai capital. These discussions of broader regional issues have served in the past to soothe regional tensions.

This year there is pressure on Southeast Asian governments and in particular on ASEAN chair Thailand to use the broader ministerial gathering to calm the situations flaring up across the region. But despite the pressing need for diplomacy, there are fears that ASEAN might not be up to the challenge.

Competition between the world's two biggest powers, China and the U.S., has heightened the risks of potential conflicts in the South China Sea and the Taiwan Straits, while the violent unrest in Hong Kong represents another flashpoint. A deepening dispute between South Korea and Japan is also raising concerns about stability.

The ASEAN Regional Forum, or ARF, which consists of a routine series of multilateral and bilateral meetings, provides an opportunity for regional powers to discuss broader security issues. It has served in the past to soothe regional tensions but usually does not produce startling outcomes.

U.S. Secretary of State Mike Pompeo and his Chinese counterpart Wang Yi will attend the gathering. Their encounter will follow renewed efforts by Washington and Beijing to reach agreement on trade issues. But few observers expect a breakthrough.

South Korea and Japan will also attend. The two countries are vigorously quarreling over issues of historical enmity and modern trade. Meanwhile, North Korea's decision to stay away will cast further doubts on the prospects of a nuclear deal with the U.S. this year.

Not since the Cold War has the Asia Pacific region been so precariously poised between peace and conflict. The most likely flashpoint is in the South China Sea, where China's contested claims of sovereignty have served as a rationale for increasingly frequent U.S. naval "Freedom of Navigation Operations." There have been three publicly announced such exercises this year. 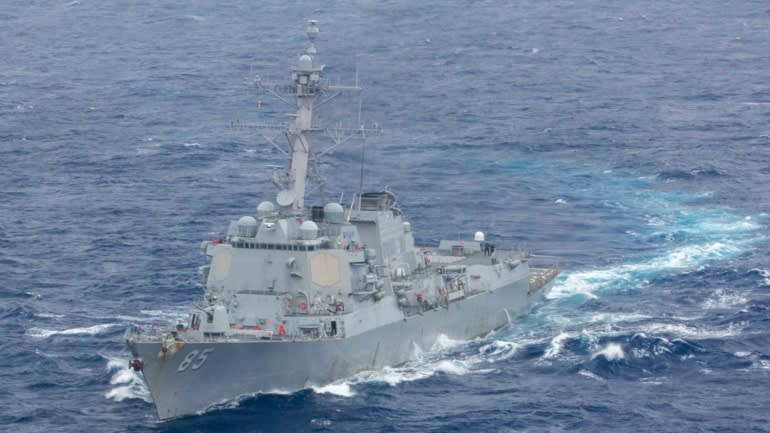 USS McCampbell maneuvers in the South China Sea on January 15: there have been three publicly announced Freedom of Navigation Operations this year. (Handout photo from U.S. Navy)

Beijing claims these are provocative incursions that infringe on Chinese sovereignty. The U.S. argues that China's refusal to clarify these claims in terms of international law makes it important to assert the principles FONOPS represent.

This has increased the risks of an armed confrontation in an area already characterized by frequent encounters between Chinese vessels and those from Southeast Asian claimant states, including Malaysia, Vietnam and the Philippines.

Some observers believe it is only a matter of time before a clash of some kind occurs. This would put immense pressure on Southeast Asian nations and other regional powers, including Australia and India, to take sides.

So what could be done in Bangkok to use multilateral diplomatic tools to reduce the chances of conflict?

First, it is important that ASEAN states strongly assert their willingness to act as an honest broker to help China and the U.S. narrow their differences. They can do this by persuading China to be more transparent about its South China Sea strategy and convincing the U.S. to reduce the frequency and profile of FONOPS. The effect of this trade-off would be to restore some calm to the waters of the South China Sea.

ASEAN laid the foundations for this role at its summit of leaders in June, where an Indo-Pacific Outlook declaration indicated the group's intention to "continue to maintain its central role in the evolving regional architecture in Southeast Asia and its surrounding regions."

The declaration explicitly stated that ASEAN "also needs to continue being an honest broker within the strategic environment of competing interests."

Second, China and the U.S. should recognize that as their sparring intensifies, they should together strengthen the ARF and East Asia Summit forums as confidence-building platforms. The U.S. has undermined their value by pushing an Indo-Pacific alliance framework that implicitly excludes China.

China for its part frequently convenes regional security officials and diplomats without inviting the U.S., while using the Belt and Road Initiative to undergird regional ties at the expense of Western powers.

More alarmingly, dialogue and engagement between China and the U.S. at all official levels have more or less dried up, which makes the Bangkok meeting one of the few occasions where senior diplomats of the two countries will meet this year. Given the current fragility of the security environment, it is vital that effective diplomacy kicks in to manage the risks of conflict.

The unhappy reality is that ASEAN is in a weak position. Effective diplomacy needs leadership. The ten-member group is divided, its senior officials do not cooperate well and there is not a strong or charismatic group of individuals at the helm, unlike in previous years.

In addition, the more the competition between China and the U.S. intensifies, the more ASEAN states are tempted to seek advantage and favor from one or other of the big powers.

This leaves much of Asia vulnerable to the resurgence of strife in geopolitics. As officials gather in Bangkok, they should be in no doubt that conflict is lurking around the corner. But it is in their power to mitigate the risks if they choose to use the multilateral diplomatic tools at hand that were designed for precisely this scenario.

Michael Vatikiotis is the author of "Blood and Silk: Power and Conflict in Modern Southeast Asia."