ASEAN's alibi diplomacy must be allowed to take effect in Myanmar

Outside actors have limited ability to influence the course of events 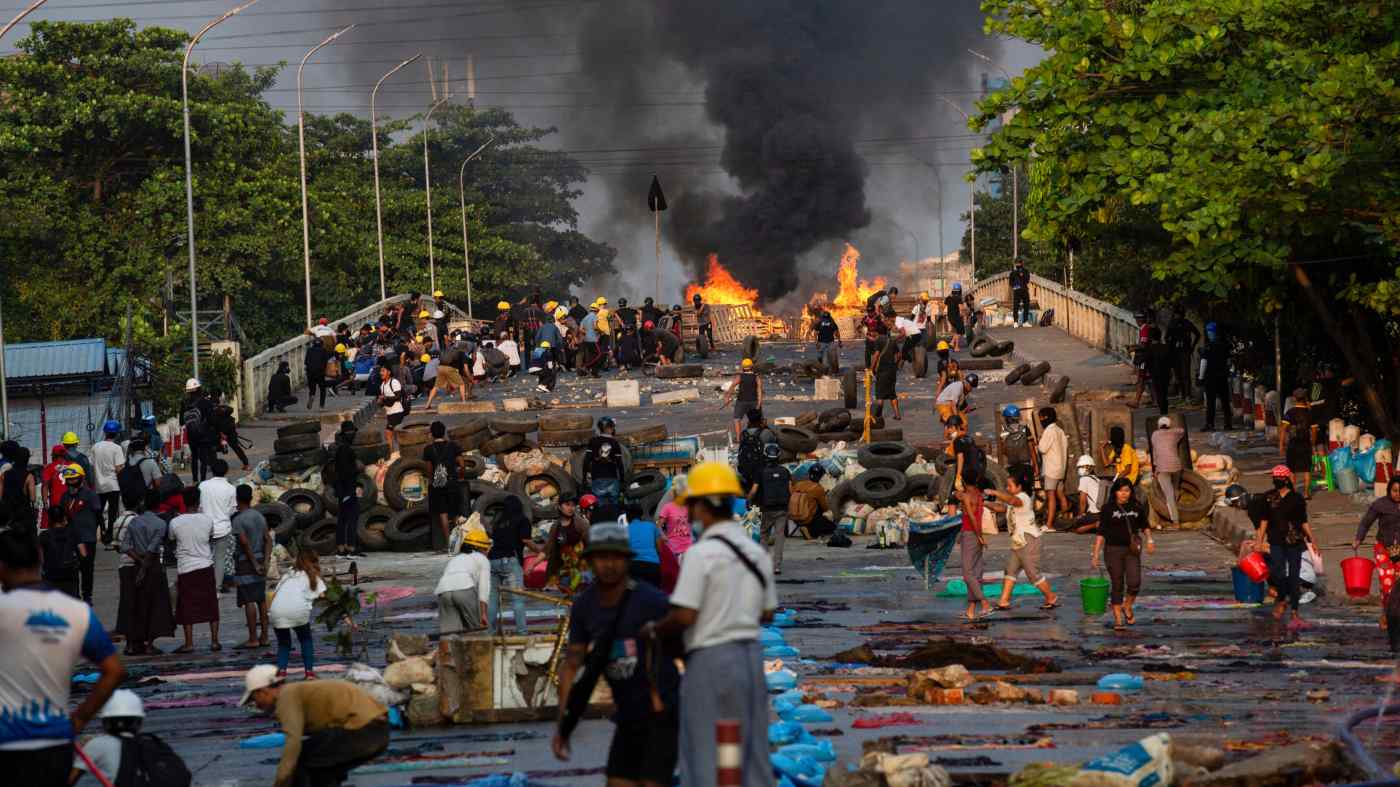 A chaotic scene during a demonstration against the military coup in Yangon, pictured on Mar. 16: neither the U.S. nor China wants to do more than they have already done.   © Sipa/AP
CopyCopied

In the early 1980s, the 10-member Association of Southeast Asian Nations lobbied then-U.S. President Ronald Reagan to help the two non-communist parties that made up the coalition government resisting the Vietnamese occupation of Cambodia.

The Khmer Rouge, the third component of the coalition government, was receiving ample arms and supplies from China. Singapore, Malaysia and Thailand were arming, training and supplying the non-communists. But we needed the weight of a superpower behind the non-communists.

The U.S. had ignominiously withdrawn from Indochina barely a decade previously. We knew it would be too much to expect even the Reagan administration to provide arms. Our request was for a symbolic $5 million in non-lethal assistance. But we underestimated the trauma that withdrawal from Indochina had inflicted on so many American officials.

The State Department official directly in charge of Southeast Asia represented the Vietnam syndrome incarnate. He was a very nice guy, but a bundle of nerves, as if supplying the non-communist resistance with a few boots, ponchos and uniforms would again lead the U.S. down a slippery slope into the quagmire of war in Indochina.

His invariable response to any request, however minor, was that the U.S. would "follow ASEAN's lead." So constant and predictable was this gentleman's refrain that even his State Department colleagues teased him about it. Spotting him at the toilet door, they would ask him if he was following ASEAN's lead.

We eventually did an end run around bureaucratic opposition and secured the $5 million, but that is another story. Still, this ancient history sprang to my mind as I watched ASEAN's response to the current crisis in Myanmar.

A day after the Feb. 1 coup, Brunei, the current ASEAN chair, quickly consulted foreign ministers of other nations and put together a statement in record time. A month later, on Mar. 2, Brunei convened an informal virtual ASEAN meeting of foreign ministers and put out another statement. Anyone familiar with ASEAN would recognize these as not insignificant achievements.

Indonesia too has been active. Foreign Minister Retno Marsudi has been indefatigable in consulting her colleagues, as well as meeting Wunna Maung Lwin -- whom the military has put in charge of foreign affairs -- in Bangkok. Retno Marsudi speaks during a virtual meeting with foreign ministers and representatives of ASEAN in Jakarta on Mar. 2: she has been indefatigable.   © Indonesia's Ministry of Foreign Affairs/Reuters

President Jokowi later proposed a special meeting of ASEAN leaders on Myanmar, and while nothing should be taken for granted, there already seems to be a general consensus on that going ahead, with even Myanmar reportedly saying it will attend. The Brunei chair has written to his counterparts to suggest that the foreign ministers meet as a preliminary to a meeting of leaders to work out the details. The foreign ministers are expected to meet in a week or two. This meeting will be crucial.

Among the details, the foreign ministers need to settle are the timing and purpose of the leaders' meeting. Expectations will be high and must be managed. If the leaders do meet, I expect that ASEAN's many armchair critics will say that it achieved nothing. This will not be entirely wrong, but that is beside the point. And this is where the Cambodia story with which I began becomes relevant.

Cambodia in the 1980s and Myanmar in the second decade of the 21st century are very different situations. But as my jittery State Department friend inchoately sensed almost 40 years ago, one never openly acknowledged aspect of ASEAN's "centrality" is to act as an alibi.

Since ASEAN claims 'centrality' it can, if necessary, be held responsible for whatever happens in Southeast Asia, to deflect blame or serve as a convenient excuse.

Neither the U.S. nor China really wants to do more than they have already done on Myanmar. Both have other priorities and are acutely aware of the strategic context of their rivalry. Neither wants to do anything that could inadvertently give the other an advantage. But both could be pressed by domestic pressures into actions that they know to be strategically imprudent: the U.S. because of the Tatmadaw's growing human rights abuses; China because the demonstrations have taken an anti-Chinese turn.

Secretary of State Antony Blinken has asked for a meeting with all 10 ASEAN members to discuss Myanmar, and Chinese Foreign Minister Wang Yi has spoken to his Bruneian and Indonesian counterparts.

Realistically, there is not very much that ASEAN -- or any other country -- can do to influence the course of events in Myanmar. All ASEAN leaders can do is discuss the situation and make another statement. There will be no consensus on anything else.

Thailand has itself just emerged from a coup and, unfortunately, no one can say that this will be the last coup. Thailand, like Laos, has a long border with Myanmar. Vietnam and Laos have communist systems and, together with Thailand, will be more cautious than other members about anything that smacks too strongly of interference in internal affairs.

But as long as ASEAN gives the appearance of activity, other countries can let "ASEAN take the lead." This staves off pressures to do more themselves or take actions that could make an eventual return to at least a fig leaf of constitutional rule in Myanmar more difficult than it already is. A meeting of leaders should be regarded as a step in ASEAN's alibi diplomacy.

Activity as a substitute for action or as an alibi is legitimate diplomatic tactics. But it is not one that is without risk. ASEAN must maintain a delicate balance.

The leaders are ASEAN's heaviest guns. Whatever they do or say should not be just about making them look or feel virtuous, but be part of a strategy: strong enough to maintain ASEAN's credibility as an effective alibi, but not so tough as to alienate the Tatmadaw and so foreclose the possibility of ASEAN playing a substantive role in the future when the Tatmadaw feels secure enough to move and needs a ladder to climb down. Such a move is not imminent.

If we fire all our heaviest guns prematurely, we may run out of ammunition when we most need the heavy artillery. The timing and tempo of their use is therefore key. Hard and bitter though it may be, we -- ASEAN and the rest of the world -- must compose ourselves in patience and let ASEAN's alibi diplomacy buy time for the situation in Myanmar to ripen.