Beijing will move quickly to exploit fissures in the U.S. alliance network 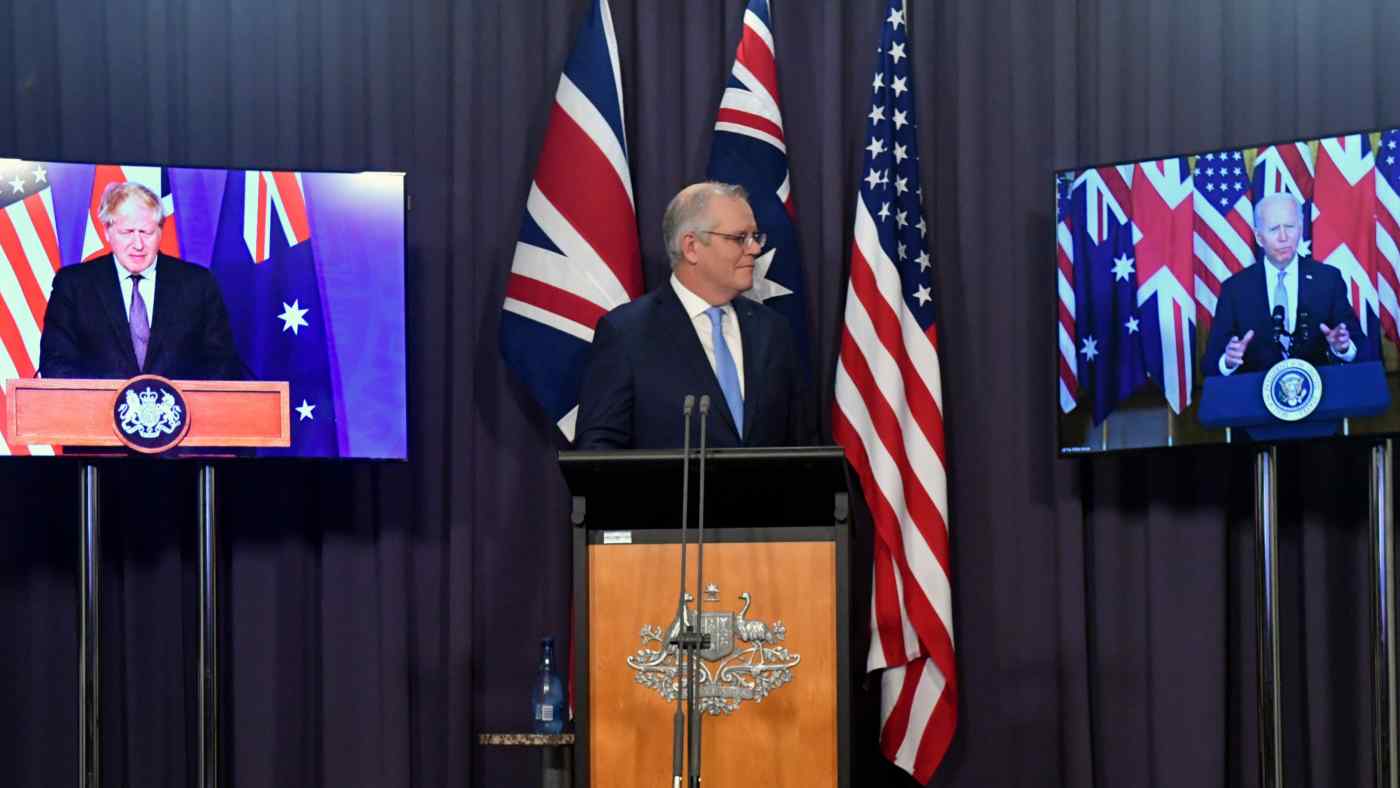 Scott Morrison, center, appears on stage with video links to Boris Johnson, left, and Joe Biden at Parliament House in Canberra on Sept. 16: AUKUS is intended to be a counterweight to China's burgeoning military expansion.   © AAP Image/AP
CopyCopied

Yet another acronym surfaced in the alphabet soup bowl of defense alignments in the Indo-Pacific yesterday with the joint creation of an enhanced trilateral security partnership called AUKUS.

The leaders of the U.S., Australia and the U.K. heralded their joint resolve to deepen diplomatic, security and defense cooperation in the Indo-Pacific region to meet the challenges of the 21st-century.

But reading between the lines and echoing joint statements made by all three countries at a Group of Seven summit in June, AUKUS is clearly intended to be a counterweight to China's burgeoning military expansion.

Removing the window dressing, AUKUS's first task will be to come to the rescue of Australia's faltering Future Submarine Program.

With the birth of AUKUS, a historic submarine deal between France and Australia has been ditched unceremoniously. The 90 billion Australian dollars ($66 billion) contract with France's shipbuilder Naval Group was scheduled to deliver the first of 12 attack submarines to the Royal Australian Navy by 2034 but had floundered almost immediately, amid mounting delays and acrimony. 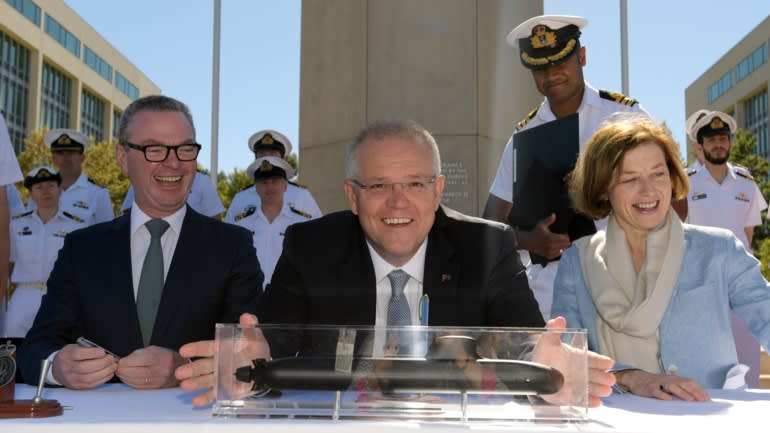 Scott Morrison signs a strategic partnership agreement with France in Canberra in February 2019: with the birth of AUKUS, a historic submarine deal has been ditched unceremoniously.    © Getty Images

Most controversially, the solution offered by AUKUS involves a switch from conventional submarines to nuclear-powered submarines, something in which the U.S. and U.K. have deep experience but which Australia has none. Further complicating the task is the absence and rejection of a nuclear power sector and supply chain in Australia.

The AUKUS group has given itself 18 months to identify a plan of action that will rely on British and American expertise in nuclear-submarine propulsion but will offer opportunities for Australia's defense industrial base. The AUKUS statement sought to emphasize interoperability, commonality and mutual benefit as a joint endeavor by all three countries.

In practice, the arrangement may involve some form of nuclear surrogacy exploiting nuclear fuel cycles and reactor engineering in the U.S. and U.K. There has been some debate about Australia simply leasing Virginia class nuclear subs from the U.S., but that option would limit the participation of Australian defense contractors.

Despite the sanguine mood at the AUKUS joint launch event, it was overshadowed by barely suppressed anger in Paris. France's Foreign Affairs and Armed Forces Ministers Jean-Yves le Drian and Florence Parly issued a terse joint statement replete with resentment.

The ministers accused the U.S. of removing an ally from a partnership with Australia with a regrettable "absence of coherence." As a resident power in the Indo-Pacific, France was a reliable partner that would continue to commit to the region's security, the statement said. They concluded that the only way to defend France's interests in the Indo-Pacific was through European Strategic Autonomy.

Former French ambassador to the U.S. Gerard Araud put it more plainly, tweeting: "France has just been reminded this bitter truth by the way the U.S. and the U.K, have stabbed her in the back in Australia."

China's state media was swift to open the floodgates of vitriol. Accusing AUKUS of prompting a "nuclear-powered submarine fever" of global proliferation, the Global Times warned that Australia's participation in a U.S.-led "strategic siege" of China over the South China Sea or Taiwan would result in Australians being the first Western soldiers to lose their lives and Australia would be targeted by Chinese missile strikes.

While there is a nascent debate in Australia on whether there is an appetite to join the U.S. in a war of intervention to defend Taiwan from an invasion from China, the question seems absent in the U.K. Tokyo has observed that Japan would inevitably be involved in the defense of Taiwan and former U.S. Indo-Pacific Commander Admiral Harry Harris has called for a review of U.S. strategic ambiguity on the same question.

In the wake of the chaotic withdrawal of Western troops in Afghanistan, and in light of angry statements in Paris, Beijing will jump on the opportunity to exploit fissures in the U.S. alliance network. In particular, the genesis of AUKUS and its fallout will lead Beijing to intensify its information operations, questioning the reliability of the U.S. as a security partner for Taiwan.

Equally, Japan, which lost out in the Australian submarine competition to a deftly executed campaign by France's Naval Group, will be included in China's Cold War narrative in the Indo-Pacific.

Meanwhile, the HMS Queen Elizabeth Carrier strike group, which is nearing the final phase of its mission in the West Pacific, could face intensified attention from the People's Liberation Army on its return leg via the South China Sea.

The group appears to have avoided escalation with China by opting not to transit the Taiwan Strait or conducting U.S.-style freedom of navigation operations close to Chinese occupied atolls in the South China Sea.

But the silent spearhead of the group is a Royal Navy Astute class submarine, nuclear-powered and for the most part of the mission submerged and likely undetected -- not only sufficient as a strategic deterrent but also a successful sales advertisement.