Behind all the smiles and camaraderie, U.S. President Donald Trump, left, and Japanese Prime Minister Shinzo Abe talked past one another more than sharing a common script.   © Reuters

Donald Trump visited Tokyo for four days intending to cement his "unshakable bond" with Shinzo Abe. Instead, the visit showcased why their unlikely bromance is headed for trouble.

Visually, all went as planned. The golf outing, the audience with new Emperor Naruhito, the sumo and the naval base visits were real. But mentally the U.S. president's mind proved to be thousands of miles away from his gracious Japanese hosts -- in ways that bode ill for upcoming trade talks.

Trump's only unshakable bond was with his angry Twitter feed. While in Tokyo, he took to that platform to unload on China, the European Union and his possible 2020 election opponent Joe Biden. He also cozied up to North Korean leader Kim Jong Un. In doing so, Trump put Japanese Prime Minister Abe's team in a thankless and awkward position.

Even in person, Trump and Abe talked past one another more than they shared a common hymn sheet. While they celebrated, in Abe's words, a "rock solid" friendship that is "closest in the whole world," the sense of diverging interests was impossible to ignore.

Trump's claims, for example, that he is gunning for a trade deal with Tokyo in August seemed news to a bromantic partner trying his best to avoid one, because his party faces elections in July. Whether Trump knows it or not, his art of the deal is colliding with Abe's even more ambitious art-of-the-delay.

The reality is so bad that the Donald-and-Shinzo show in Tokyo may yet have a seriously bad ending for markets.

The breakdown of Trump's much-hyped China trade deal has him losing face. Xi Jinping isn't bowing to Trump's tariffs and moves to tackle Huawei Technologies. In fact, Trump's assaults are doing something fairly extraordinary: making the world sympathetic to China.

Trump's desperation for a win, any win, on the global stage has him assuming pal Abe will oblige on trade. Abe cannot, of course, certainly not to Trump's satisfaction. In Tokyo, Abe skillfully used sumo to distract Trump, when really it was the prime minister's Kabuki that won the four days. Abe got a huge win, perhaps without Trump even knowing: there was no joint statement in Tokyo consigning Abe to an August deadline on a trade deal.

But the Tokyo spectacle will mean little a few months from now. At home, Trump's political and legal jeopardy increases by the day. As does his anger that President Xi is not acquiescing. Add in Pyongyang's determination not to be ignored and you have a perfect storm brewing for the Trump-Abe relationship.

"For all the good optics and positive symbolism of solidarity, Trump isn't really cutting Abe any real slack as August is the month of reckoning for their bromance," says Jeff Kingston, head of Asia studies at Temple University's Tokyo campus.

Monday's news conference was a study in two allies talking past one another. Abe, for example, barely even uttered the words "trade negotiations." Instead, he highlighted how Japan Inc. is already making America great again by boosting foreign direct investment.

"Those companies contributing the most to the U.S. economy are Japanese," Abe said, talking up $24 billion of Japanese investment in the U.S., creating 45,000 jobs. 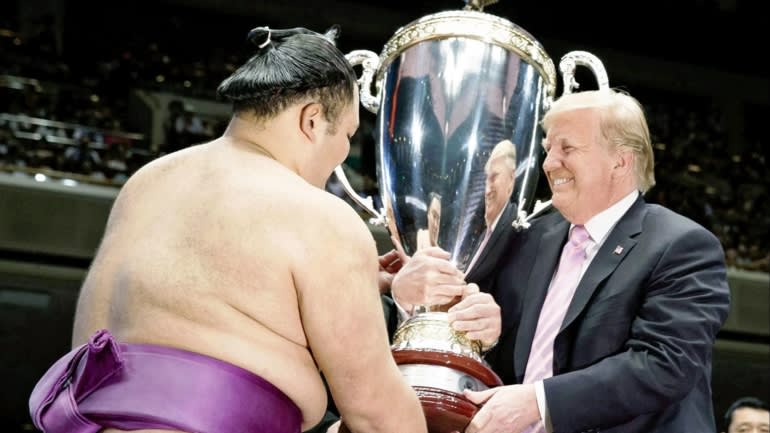 Prime Minister Abe skillfully used sumo to distract President Trump, when really it was the primer's Kabuki that won the four days of Trump's visit to Japan.   © AP

Abe stroked Trump's ego, lauding the "daring tax reform" catalyzing a rush of Japanese capital into America's automotive and energy sectors. It was no coincidence that Abe, with Trump smiling approvingly, touted Japan's big investments in Ohio, Pennsylvania, Michigan, Alabama and other states vital to deciding the 2020 U.S. election.

It was music to Trump's ear. But it was also a matter of in one ear and out the other. Moments later, Trump reverted back to his Japan talking points. Tokyo, he complained, has "an unbelievably large surplus" with the U.S. -- or about $60 billion annually.

This was two days after Trump ribbed Toyota Motor Chief Executive Akio Toyoda for essentially profiting off American hardship. "Japan has had a substantial edge for many, many years," Trump said at a business round table with Toyoda and other corporate bigwigs. "But that is OK. Maybe that is why you like us so much."

Trump bashed the Trans-Pacific Partnership, a key pillar of Abe's reform efforts. "TPP," Trump said, "would have destroyed our automobile industry and many of our manufacturers." The inference was clear: Abe is expected to go much further with concessions to avoid a Japanese front in the trade war.

That puts Abe in a terrible bind ahead of July's upper house elections (and perhaps lower house contests, too). Any extra market opening Abe accords Trump in, say, agriculture, would also irk his 10 TPP partners. It might draw some awkward phones calls from the European Union, with which Tokyo last year concluded a trade deal.

The sense Abe has gotten little return on his Trump investment might stir opposition forces, complicating plans to revise the pacifist constitution. Or, pull off a twice-delayed sales tax hike planned for October -- to 10% from 8%.

The recent downshift in Japanese economic growth is anything but fake news, and Trump is the cause, with his duty hikes on $200 billion of Chinese goods to 25% from 10% and threats of more.

The 25% levies Trump threatens for imports of cars and auto parts hangs over Japan Inc. like a sword of Damocles. It decreases the odds chieftains will boost Japanese wages and save growth by fueling domestic consumption.

Trump's take on the U.S.-Japan security relationship is another source of existential angst. On the campaign trail in 2016, he complained often that Japan should pay more for military protection. Trump is sure to exploit this point in trade talks and so anger Abe's Liberal Democratic Party.

Even here, Trump misses the bigger picture. Rather than see Tokyo's order of 105 U.S.-made F-35 stealth fighters as support for a key industry, Trump speaks as if he is doing Abe a favor.

The obsequiousness on display in Tokyo bought Abe's government a couple of months. But his bromance is on borrowed time. Come August, investors are almost certain to look back at these four days as the party before the storm.