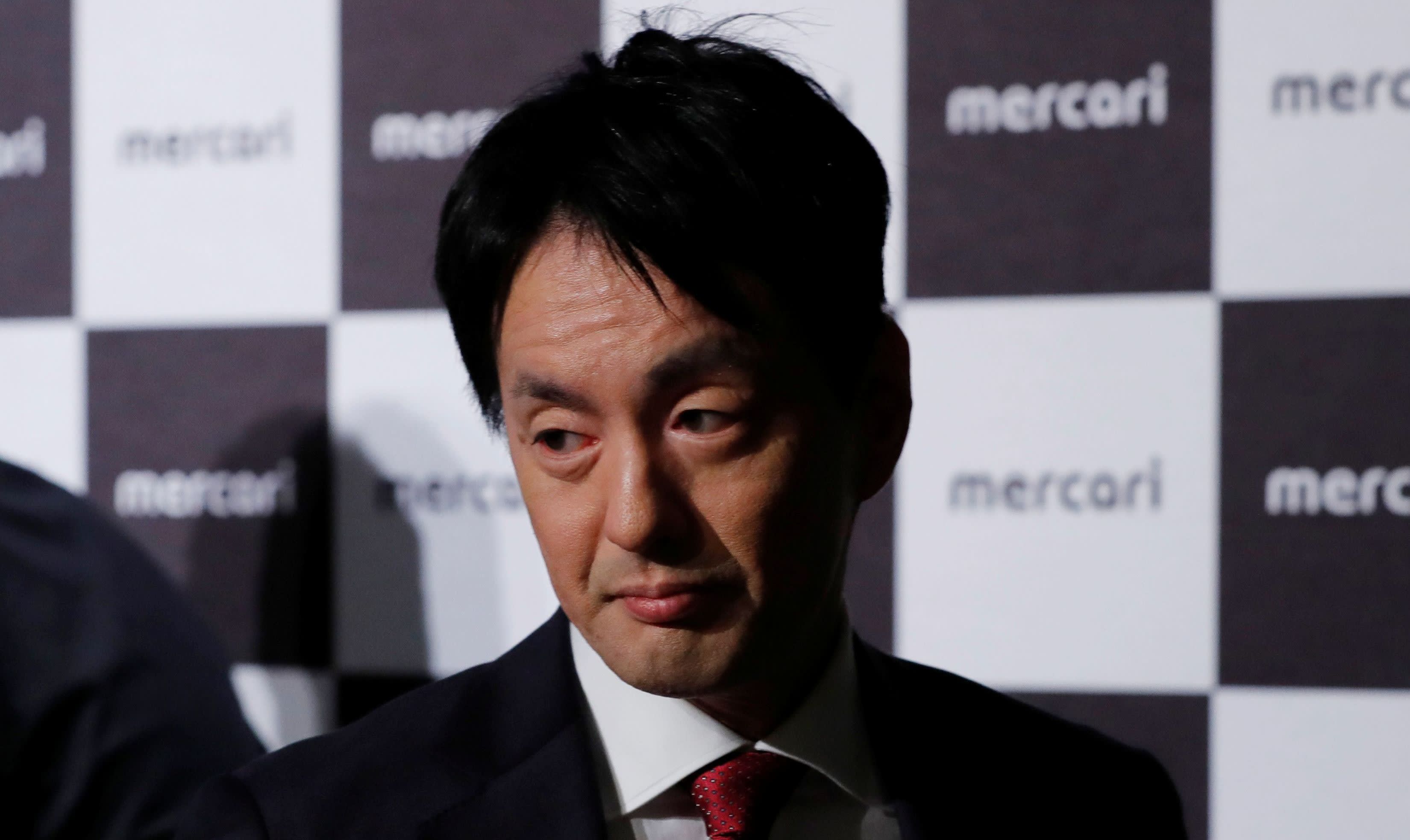 Mercari CEO Shintaro Yamada. Is the unicorn an exciting omen of things to come or a mere aberration?   © Reuters
CopyCopied

If Shinzo Abe could concoct a success story to inspire risk-taking and wealth creation in Japan, it would look very much like Mercari.

The flea market app is Japan's first bona fide unicorn, a startup with a valuation topping $1 billion. It has big global ambitions and an aggressive founder in Shintaro Yamada. What is more, its price popped 67%, Silicon Valley-style, when it listed on the Tokyo Stock Exchange at Tuesday's opening, and closed the day up 77%. That sparked a level of buzz Tokyo had been missing for many years.

But one question faces Tokyo's tech community: Is Mercari an exciting omen of things to come or a mere aberration?

It is easy to think the latter. Japan's pipeline of startup sensations is modest at best. Mercari is part of Japan's thriving thrift economy, a reminder of the deflationary matrix in which millennials were steeped. Graduates still opt for safe jobs at Sony or Toyota over risking failure in the startup game.

Japan's first big tech wave ended rather abruptly. Rakuten, Yahoo Japan and CyberAgent all got clobbered when the dot-com bubble burst in the early 2000s. Livedoor's comeuppance in 2006 and the global financial crisis two years later had entrepreneurs lowering their sights and taking jobs at corporate giants.

Mercari puts Tokyo back on the radar. That one of this year's most tantalizing tech payoffs came in aging Japan, not California or China, may reanimate a stunted startup scene. And it presents an ideal opportunity for Prime Minister Abe to reinvigorate his reform push.

Since returning to power in 2012, Abe has talked early and often about rekindling the innovative spirit that propelled Japan into the Group of Seven orbit. In September 2013, Abe visited the New York Stock Exchange and declared, "I would like to turn Japan into an entrepreneurial powerhouse brimming with the entrepreneurial spirit, just like the United States."

In April 2015, Abe dropped by Stanford University and said: "Improving the situation for existing companies is not enough. I want to soak up all that Silicon Valley has to offer and take the lessons to Japanese." Yet, as Abe also explained, American tech titans once learned from Japan Inc. In the 1980s, Sony, Toshiba and others set the global agenda -- and Japan can once again.

But Abe has been glacial in his approach to regaining that innovative mojo. To date, he has favored aggressive monetary easing and corporate governance tweaks. That sent stocks soaring and generated record corporate profits, but did little to inspire inventiveness. Abe made the very mistake he warned of at Stanford -- targeting existing companies, not scrappy, game-changing new ones.

The crux of the problem is too much messaging and not enough action. To Abe's credit, the government is looking to ride Mercari's coattails. Earlier this month, it detailed a strategy to nurture a fresh wave of unicorns to raise Japan's digital-economy footprint. By lifting regulations and tackling monopolies enjoyed by Google, Amazon and other U.S. giants, Tokyo hopes to cultivate 20 unicorns by 2023. Yet even this latest push lacks creativity and teeth.

How best to disrupt Japan Inc.? First, Abe must engineer the regulatory big bang he promised in 2012. That means slashing the notorious bureaucracy standing in the way of entrepreneurs creating jobs. In the World Bank's latest "Ease of Doing Business" rankings, Japan came in 34th. That puts Abe's economy eight rungs behind Thailand, 10 behind Malaysia, and fully 29 behind Hong Kong and 32 behind Singapore.

The gaps with Hong Kong and Singapore are particularly problematic, given Japan's weak English skills and rigid immigration laws. Equally notable: Japan's rankings have worsened on Abe's watch (it was 23rd in 2012). With majorities in both houses of parliament and a reform plan the public supports, Abe should bulldoze sweeping changes to reduce the time, difficulty and barriers that discourage local innovators and drive foreign ones elsewhere.

Tokyo should craft a tax-holiday scheme. Abe's team could say this to 20-somethings looking to follow Mercari's lead: If you start a new venture today, you pay no corporate taxes for a few years or, at most, a negligible rate of 5% to 10%. Forget tired, unworkable gimmicks like "special-enterprise zones" that have not worked for South Korea or China. Instead, morph the entire nation into one. The key is shifting incentives to encouraging job creation from the ground up, not protecting established giants.

Mercari's Yamada personifies Abe's hopes for a startup renaissance. Yamada's global ambitions are more in step with Masayoshi Son's strategy at SoftBank than one typically finds in Japan. But cultivating the next Yamada requires considerable heavy lifting on the reform front. Abe cannot conjure up an innovative revolution rhetorically.

The natural resources are there. Japanese caution, for example, has not stopped a wave of innovation in the cryptocurrency space. A steady flow of new exchanges is setting up Tokyo as a global hub for blockchain innovation. Any search for Japan's next unicorn includes bitcoin exchanges like bitFlyer and Coincheck -- that is, if change-averse bureaucrats do not wreck things by stifling the market's laissez-faire ethos.

To encourage greater risk-taking, Tokyo should broaden social safety nets to catch entrepreneurs that fail. It might consider greater tax incentives for venture capitalists to dole out financing, including providing public money. The ends of setting aside several billions of dollars of taxpayer money might justify the means. It might yield greater economic payoffs than a weaker yen or public-works spending.

Startup funding in Japan is rather pitiful given the potential -- about $1.3 billion a year compared with roughly $70 billion in the U.S. and $20 billion in China.

Abe also should call Son in for a chat. Over the last 18 months, no one has shaken up the venture capital world more than Japan's richest man. Single-handedly, Son shook up sectors, including chipmaker, robotics, satellite, renewable energy and indoor farm, and used his stakes in Uber, Didi Chuxing, Grab and Ola to commandeer the ride-sharing space. Yet Son has put virtually none of that largess to work in Japan.

Now, as Son works to double the size of his $100 billion Vision Fund, Abe should make his own pitch. Why not ask Son, Yamada, Hiroshi Mikitani of e-commerce juggernaut Rakuten and other tech moguls to help prioritize an immediate to-do list? Pick their brains on how to smash the groupthink that restrains risk-taking, and what tweaks could be made to education and training to inspire millennials. Ask, too, what it might take to get them to support the next wave of domestic unicorns.

Another topic for Son and his ilk: the mafia. Not the yakuza, but an ecosystem of innovators akin to the "PayPal Mafia" that changed the face of Silicon Valley. The name flowed from a 2007 Fortune magazine cover casting the PayPal billionaires as faux mobsters. Those riches and lessons helped create YouTube, LinkedIn, SpaceX, online review site Yelp and other disrupters.

"I would not be surprised if a 'Mercari Mafia' of incredible founders rise after this IPO," James Riney, head of 500 Startups' $35 million Japanese fund, told the TechCrunch website last month. "I can't wait to back them!"

Abe's team should do the same to make Japan's Silicon Valley dream a reality -- and reboot Abenomics. It is high time to break through the political constraints standing in Japan's way. The buzz over Mercari is Abe's ticket to regaining the momentum.