Shinzo Abe adjusts his face mask as he speaks to the media on Apr. 6: the government must stop making this crisis about Abe. (Photo by Uichiro Kasai)
CopyCopied

Abe has a dog on his lap, which then licks his face. Abe sips from a cup of tea. Abe reads a book with a teddy bear in the background. Abe uses the TV remote.

Such were the uninspiring contents of a video Japan's Prime Minster Shinzo Abe published on his Twitter feed, which has now been viewed more than 18 million times, to show that Japanese citizens should stay home and prevent the spread of coronavirus.

His message was benign enough: "We can't see our friends or go out drinking. However, such actions are saving many lives and relieve the strain on health care professionals who are facing very challenging circumstances. Thanks to every single individual for their cooperation."

But this video was neither instructive nor comforting nor confidence-boosting. The Japanese public, for whom the video was made, knows very well what staying in place looks like. 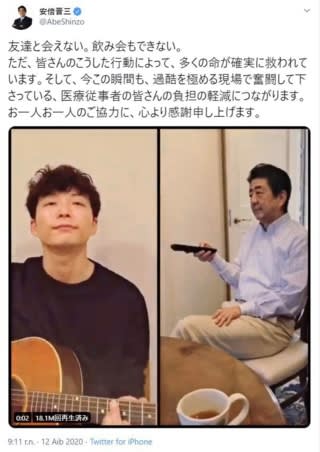 Shinzo Abe, right, posted a video with a message telling people to stay at home, as a response to a video made by popular musician Gen Hoshino, left.   © Kyodo

Abe's couch potato display illustrated how out of touch the government is with society. Nearly two-thirds of people surveyed by Gallup recently said the government had mishandled the early stages of the COVID-19 outbreak.

Worse, the government earmarked $22 million from its stimulus package to dispel negative perceptions of Japan related to infectious diseases. Indecision and hesitation over coronavirus action cannot be undone by image-buffing.

If the Japanese government is going to come out of this with any credit, it does not just need tighter measures on public movement, though those would be welcome. It needs to rethink entirely how it communicates those measures and its attitudes to the public, or face its complacency worsening the problem.

The scale of the problem is enormous. The Health Ministry's team of experts foresaw 400,000 deaths if the government of Japan had not issued any strict mitigation guidelines resembling typical lockdown measures around the world.

Tokyo's Governor Yuriko Koike makes an instructive contrast with Abe. She is calling for much tougher measures than the central government and doing it by holding daily press briefings in English that treat viewers with respect. Abe infantizes the public with his top-down "I'm in charge" approach to the problem.

The Abe-Koike contrast is not simply an old-fashioned rivalry between political opponents. Koike clearly has her ear closer to the ground. She recognizes that Japanese citizens must cooperate and change their behavior drastically or look defiantly ill-prepared in the eyes of the world.

What can Japan do now? After firing those responsible for Abe's staycation video, I would do the following.

Japan must look to its neighbors for how it can actively engage with publics at home and abroad. South Korea has received global accolades for its drive-through testing and engaged citizenry, its speed prompted by its experiences with SARS and MERS. Its public has engaged in discussions about curbing civil liberties in exchange for unanimity in stopping COVID-19's spread through monitoring movement and contact tracing.

In Japan, messaging is either confusing or self-serving. While the government recommends izakaya bar-restaurants reduce their hours of operation, pachinko parlors remain open. Public transportation cannot shut down as nearly 90% of the workforce reports that they cannot work from home.

In times of crisis, the Japanese central government follows its standard script: it publicizes the creation of a committee of government-friendly experts, yes people, mostly men, sitting around a conference table. The photo op is the message.

The public is seeing this for what it is, a system that serves the government leadership first, the political economy second and the citizenry third. In the coronavirus era, citizens come first. The government must stop making this crisis about Abe.

In good public relations, you must respect your audience and play to its interests, not yours. The narrative of how Japan is fighting COVID-19 is being swallowed by political grandstanding. Every time a government official speaks, balance that with an everyday citizen sharing how she or he is personally responding to the coronavirus.

Surely the government can tap into grassroots best practices in response to coronavirus and promote them. Emphasizing the importance of these stories at home and abroad would both motivate Japanese citizens to take tougher measures and show the world that Japan is truly facing the problem.

You do not need the chintzy sofas and cheesy actions of Abe's video for that.