Since its outbreak in August 2018, African swine fever has devastated China's pig population. Analysts estimate that by the end of 2019, China's production of pork could be cut in half. That equates to 300-350 million pigs lost -- or a quarter of the world's pork supply.

Pork is the most consumed meat in China, accounting for nearly 64% of meat eaten last year, so this epidemic is having a profound impact on people and the economy.

We should note that other Asian economies may be in even greater trouble, with the U.N. warning that millions of livelihoods are at risk in Vietnam, Cambodia, Mongolia and Laos -- all of which have reported outbreaks of ASF.

Some have argued that a problem aggravated by Asia's high numbers of backyard and small pig farms, with their poor bio-security, could be solved by consolidating smaller farms into larger, better-managed industrial outfits. But research shows that this could have unintended consequences, and that true, long-term solutions require a diversity of protein sources.

The effects have been immediate. Despite the Chinese government deploying its massive pork reserves, imports rose 60% in the second quarter this year, affecting global markets. In China itself, prices have risen by almost 50% and are set to climb to 80% higher year-on-year by early 2020.

As Chinese economic growth has weakened this year, the central bank has started to ease monetary policy, but the specter of pork-led inflation could even limit its space for cutting interest rates and exacerbate the slowdown in growth.

There is logic behind the call to consolidate farms. A study of 68 outbreaks in China concluded that over one-third were caused by feeding pigs food waste -- a high-risk but common practice in backyard farms.

The outbreak has already forced the closure of many small farms, and China's policies are accelerating the trend. Banks have been ordered to offer credit lines and low-interest loans to farms with more than 5,000 hogs, and subsidies of up to 5 million yuan ($700,000) are set to support the construction of large-scale pig farms.

However, research by FAIRR, which raises awareness among investors of the risks of intensive animal production, suggests this is not the answer. Disease spreads even faster when tens of thousands of animals are kept in close confinement, while the lack of genetic diversity in factory farming increases the vulnerability of animals to epidemics.

One way industrial farms seek to limit exposure to disease is to give antibiotics to healthy animals as a preventive measure. This practice is accelerating the development of antimicrobial resistance -- a growing threat for emerging economies.

Despite the World Health Organization calling for an end to such indiscriminate use, our recent Coller FAIRR Index found that 40% of the largest publicly-traded pork companies have no policy on antibiotics use and do not disclose the quantity or types of antibiotics used on their farms.

Positively, China has recently launched a pilot program to eliminate the use of antibiotics in animal agriculture by 2020.

Investors, too, have real leverage with the corporations they invest in -- and they are calling for better management of sustainability risks.

But no amount of regulation or management can eliminate the serious health and environmental problems that stem from processing 70 billion animals worldwide for human consumption each year. As such, balancing consumption between meat and alternative sources of protein looks essential.

With meat consumption in emerging economies like China still rising, this is a mammoth task. But thankfully there are some promising signs. People in China appear open to reducing their meat intake, with 93% of respondents to a recent study saying that they would likely purchase plant-based meat. 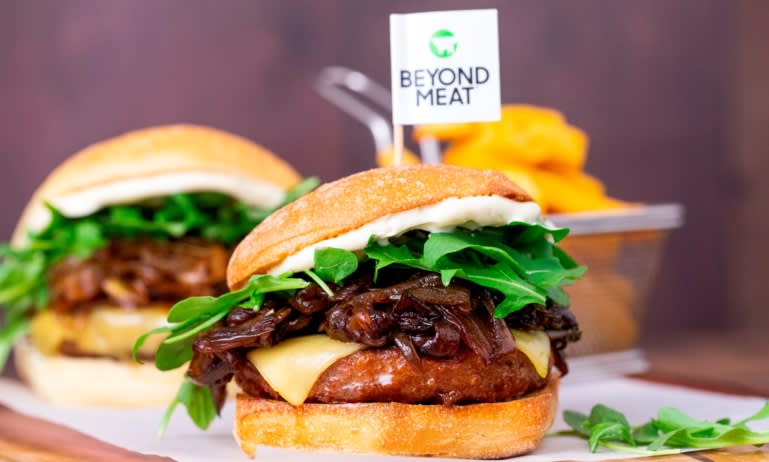 Beyond Meat's flagship product, Beyond Burger. (Courtesy of Beyond Meat)

Their options for doing so are on the rise. American plant-based food businesses Beyond Meat and Impossible Foods are expanding in Hong Kong and preparing to launch in China, while Chinese company Whole Perfect Foods and Hong-Kong based Omnipork are set to provide competition.

The scale of the African swine fever epidemic is having regional and global consequences, with the potential to remake the pork industry in Asia. As devastating as the disease has been, it presents an opportunity to build a sustainable and safe protein supply chain that protects human, animal and planetary health. For that to happen, the solution needs to go beyond Western-style industrialized farms. Aarti Ramachandran is Head of Research and Engagements at FAIRR, a collaborative investor network that raises awareness of the material environmental, social and governance risks and opportunities caused by intensive animal production.