Japan and China each hold more than $1tn in US Treasuries Joe Biden must accelerate efforts to protect the AAA credit ratings that the last White House put in such peril.   © Getty Images
CopyCopied

That was the year Washington rolled out its strong dollar policy. It emerged two years after President Bill Clinton's first treasury secretary, Lloyd Bentsen, shook global markets by saying, "I would like to see a stronger yen." Bentsen did not last long after that episode, replaced in 1995 by Robert Rubin.

And then -- you guessed it -- Donald Trump bumbled along to flip the script.

In 2018, President Trump's Treasury Department said the U.S. was going the Argentina route, favoring a weaker exchange rate across the board. Trump waged a nihilist trade war, lost virtually all America's allies, borrowed like a gambling junkie and practically turned the Federal Reserve into an arm of the Trump Organization. Had Trump won a second term, you just know his daughter Ivanka would be replacing Fed Chairman Jerome Powell.

Today, as President Joe Biden struggles to stem the fallout, the year 1995 keeps haunting his options. For one thing, that was the last time demand for dollars was as low as it is now.

The share of dollar assets just sank for a fifth straight Trump-plagued year to 59%, the lowest since a 60% share in 1995. Is this really a coincidence? No, and it is exactly the type of wild card Biden does not need as he works to recalibrate growth engines amid the devastation of COVID-19.

All this is proving monumentally expensive. On top of trillions of dollars of COVID rescues, Biden plans $2 trillion more for infrastructure and a $6 trillion budget. In rolling out such eye-popping numbers, the U.S. president assumes Washington's Asian bankers will have his back.

Asian central banks, remember, essentially hold the deed to America's deficit-heavy economy. The top 10 Asian holders of U.S. Treasury debt are sitting on $3.5 trillion worth. The biggest -- Japan and China -- each holds more than $1 trillion.

China has been reducing Washington's allowance. Beijing's $1.07 trillion of holdings are down nearly 20% from the peak seven years ago. Russia is diversifying away from the dollar, too. Though Trump and President Vladimir Putin were pals, Moscow trimmed dollar assets by half since 2017 as the U.S. Congress imposed sanctions for Russia's aggression in Crimea.

The question is what happens now? Odds are Japan, Washington's top financier, will hold on to its $1.26 trillion Treasury securities hoard. On the one hand, selling dollars would send the yen higher, hurting exporters just as Japan skirts recession. On the other, Prime Minister Yoshihide Suga wants to nurture Tokyo's relationship with Biden.

Yet even just Asia's central banks keeping purchases constant, not absorbing more dollars, could be problematic.

In March and April, Secretary Janet Yellen's Treasury Department staged a couple of weak government debt auctions. The below-average bid-to-cover ratio at both sales was thought to bear the fingerprints of foreign central bankers turning fickle. The magnitude of spending to come thickens the plot. 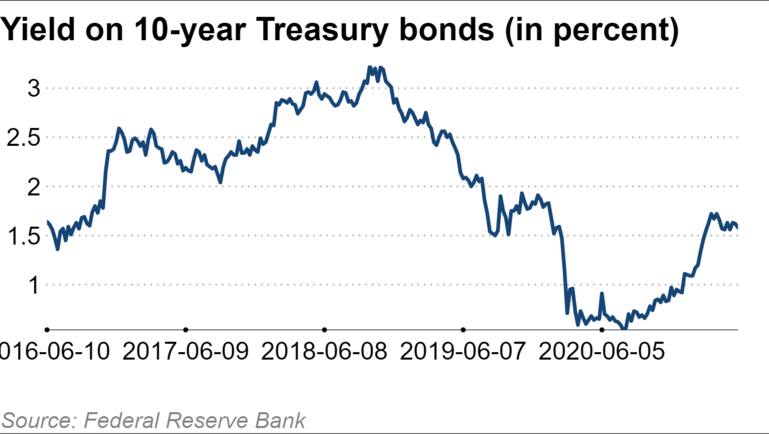 For all the borrowing Biden wants to do, many economists are perplexed by the low level of U.S. yield levels. Many analysts worried yields might surge as economies reopen and inflation perks up. Today, the rate is just 1.6%.

To some extent, this is a thank-the-gods-Trump-is-gone rally. Yet Biden must redouble efforts to reassure his Asian bankers that his White House has their backs. The former president, after all, continues to tease a return to power in 2024 and all the Trumpian pandemonium that would entail.

Biden must accelerate efforts to protect the AAA credit ratings that the last White House put in such peril. His success in getting a handle on COVID-19 infection rates and vaccinations is a great down payment. It is incumbent upon Biden to sell his plans to rebuild crumbling roads, bridges, power grids and telecommunications capacity. And to fund them with higher tax revenues, not just fresh borrowing.

Timing complicates Biden's borrowing options. One reason Russia, Brazil, Turkey and others are pivoting away from dollars is that China's yuan is evolving into a viable alternative. On top of that, says economist Wei He of Gavekal Research, the soon-to-be-launched People's Bank of China-backed digital yuan could be an "inflection point" for Beijing's role in global payments.

"The combination of a more credible and easier-to-use yuan and the solid returns now available for fixed-income investors in China means that global capital will increasingly flow toward Asia," he said. In other words, Biden faces what Trump, Obama, Bush or Clinton, circa 1995, never really did: credible competition.

It is quite the irony that Trump's brawls with President Xi Jinping made China's reserve-currency aspirations great again. It falls to Biden to restore faith in a dollar facing existential questions. Many of those conversations will take place here in Asia.