Asia must rethink bans on short-selling Paul Solway is a director and the communications officer at the Pan Asia Securities Lending Association.

When the COVID-19 pandemic sent global equity markets into free fall earlier this year, governments in Europe and Asia moved to restrict the short-selling of shares.

But in contrast to countries including France, Italy and Belgium, which allowed short-selling to resume in May, tight restrictions on short-selling remain in place in Malaysia and until October 1 Thailand. South Korea recently extended a complete ban on the practice until March next year.

Given that most Asian equity markets have risen above their 2019 highs, the enduring lack of trust surrounding the practice is difficult to understand.

Even where short-selling is allowed in Asia, it is often subject to a host of other, more technical controls, and it is really only in a few markets like Japan where Asian traders can sell short in the same way they can in the U.S. or the U.K.

So much the better, critics may say. Isn't short-selling just a way for speculators to make easy money by undermining companies? This attitude has been widespread in Asia and elsewhere for decades. It might help explain why Germany -- that otherwise proud bastion of European capitalism -- banned the short-selling of shares in now-bankrupt payments provider Wirecard in February.

Yes, short-sellers profit when stock prices will fall. But what's missing in this debate is the acknowledgment that healthy, efficient and sustainable markets depend on participants having the freedom to make such bets. Without the freedom to take short positions, it would be much harder for traders to unmask alleged corporate impropriety at companies such as Wirecard or China's Luckin Coffee. 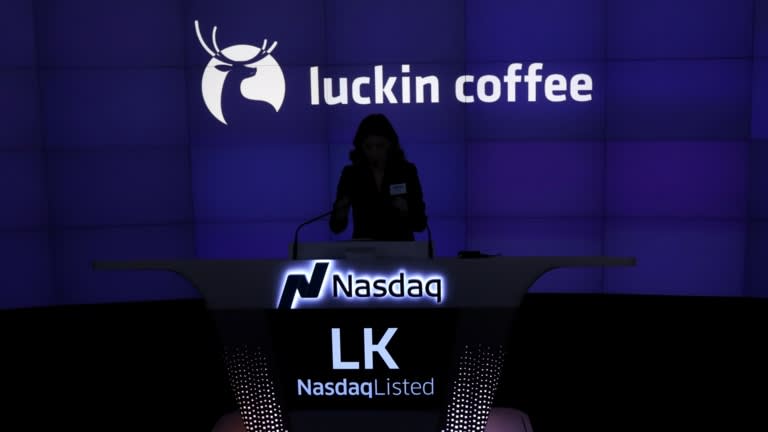 Luckin Coffee's logo and trading symbol: without the freedom to take short positions, it would be much harder for traders to unmask corporate impropriety.   © Reuters

Without short-selling, a market is denied the benefits of a corrective force that can help prevent unsustainable and sometimes disastrous stock bubbles from inflating. Not only do such markets become less resilient, they are less attractive to global investors and ill-equipped to support the real economy.

Most investors follow a basic rule-of-thumb: buy low and sell high. Short-selling operates on the same principle, but in reverse: sell high and buy low. If you think the price of a company's stock is going to fall, either because that's what your analysis indicates, or you want to protect the value of your portfolio, you can borrow shares in that company and sell them. Later, you will have to buy the shares back in order to return them to the lender. If the stock price has fallen in the meantime, you make a profit, but if the price has gone up, you make a loss.

There is little evidence that banning this activity reduces market turmoil during a crisis, and a good deal of research suggests that the opposite is true. In fact, it is clear to us that transparent and regulated short-selling is actually vital to the interests of large and small investors, listed companies and economies as a whole.

First, short-selling can serve as a useful corrective when markets become frothy. Without this corrective, it is easier for bubbles to form, and then burst. Short-selling bans can also mean that investors have to pay higher prices for stocks. It is worth remembering that every stock that is sold short must later be bought back, so banning short-selling also removes a potentially stabilizing force once a market has corrected.

The effects of an outright ban are also felt by investors who want to buy stocks and hold onto them, not just those who are betting that prices will fall. Institutional investors positioned for a rising market may still want to protect their portfolios, which are usually largely made up of the savings of ordinary investors against the risk of the market falling.

But hedging a portfolio using futures and options requires market participants to take short positions and borrow stocks. Indeed, some institutional investors are required to hedge their positions, meaning they cannot invest at all in markets where short-selling is banned. When investors have to stay away from a market because short-selling is not allowed, it reduces the capital available to listed companies, and it reduces market turnover, increasing costs for all investors.

The importance of short-selling to manage risk for investment portfolios matters a good deal to the global index providers that create widely-used investment benchmarks for asset managers.

According to a report released in June by MSCI, a global provider of equity, fixed income, hedge fund stock market indexes containing more than $13 trillion worth of investments, short-selling is a key "ingredient in the efficiency of markets." In the past, MSCI has warned countries that they may be excluded from certain indexes if they extend bans on short-selling.

Another benefit of short-selling is that it can enable investment strategies that align with environmental, social and governance principles and support a more sustainable economy. According to a report by Alternative Investment Management Association released in July, short-selling can help create "an economic impact by influencing the nature of capital flows through 'active' investing."

We urge policymakers around Asia to reconsider bans on short-selling. Governments should recognize that regulated and transparent short-selling supports efficient markets, makes them more attractive to global investors, and enhances their ability to support local economies.