Asia's century of domination not yet a certainty

Rising power is one thing, but real progress will only come with global collaboration A man collects recyclable materials from the shores of the Arabian Sea in Mumbai in June 2018: wherever we live, we can no longer afford to destroy it.   © AP
CopyCopied

It has become fashionable to say that the 21st century will be the Asian century. Indeed, everything is in place to make it so.

China's projected growth rate and that of its neighbors will create the conditions for a meteoric catch-up to the gross domestic product of the West, also the source of its military might. Over the next 30 years, we can expect a similar rise in per capita incomes. This is already true for Japan, an economic superpower, and it will soon be true for China. A little later for India, Indonesia, the Philippines, Vietnam and Malaysia.

But the issue that surpasses all others is China's rising military complex. As with India and Pakistan, China's defense capabilities in areas including Artificial intelligence, biotechnology, nanotechnology and space will have to be taken more and more seriously.

After the global success of Japanese and South Korean automobiles and household goods, Chinese brands are also beginning to be taken seriously, and will soon be making inroads into Western markets. As it becomes more widely convertible, China's currency, or its digital avatar, could become a reserve currency to match the dollar, euro and yen. The soft power of these countries as well as the incredibly creative and globally influential South Korea is already making a huge impact on the imaginations of the world's young generations.

Reading Asia's thinkers, even more so than its politicians, we can see a new arrogance emerge: "The domination of the West," they say, "is over."

Those two centuries when first Europe, and then the U.S., crushed Asia under the weight of cynical and brutal exploitation -- to the point of drugging it to weaken it -- are closed. The ancient balance of the world has been restored, they say, "where China was the world's greatest power," and the other Asian societies "were infinitely more civilized than the barbarians of Europe and elsewhere."

They often add: "Be assured, our domination will not be a colonial crushing, as yours has been, but a material domination, which will allow us to have access to what we lack the most: agricultural production, even if it means buying land in your country, in Africa, in Latin America and even one day in the U.S."

"You have polluted rivers, streams and seas; you have destroyed forests, both in your own country and in ours, and you would like us to ban it? Your interest in nature, in ecology, in the reduction of greenhouse gas emissions, in the climate, is in fact only an ideological construction to slow us down in our inevitable march toward the domination of the world."

With such speeches, Asian thinkers have made allies in Africa, South America, Russia and eastern Europe.

Of course, there are distinctions. Some have understood that the planet is unique and that wherever we live, we can no longer afford to destroy it. That we must all commit to reducing CO2 emissions, plastic waste, discharge into the oceans, which today comes mostly from Asian rivers, that we must join forces against the transmission of further diseases from animals to humans, drought and other threats.

Moreover, across Asia, many are aware of their own weaknesses: demographics, which will make them old before they become rich; the inferiority of women, which deprives them of immense potential for the realization of creativity and wealth; the divisions that could lead to enervating violence to the great happiness of the West. Even worse, the political upheaval that will inevitably follow as rising standards of living expose the absence of democracy.

A smaller number are beginning to realize that from 2050 onward, other powers will emerge: current projections suggest that the two most populous countries in the world at the end of the century will be India and Nigeria. We will soon see the rise of African powers with the same promise of China 40 years ago. 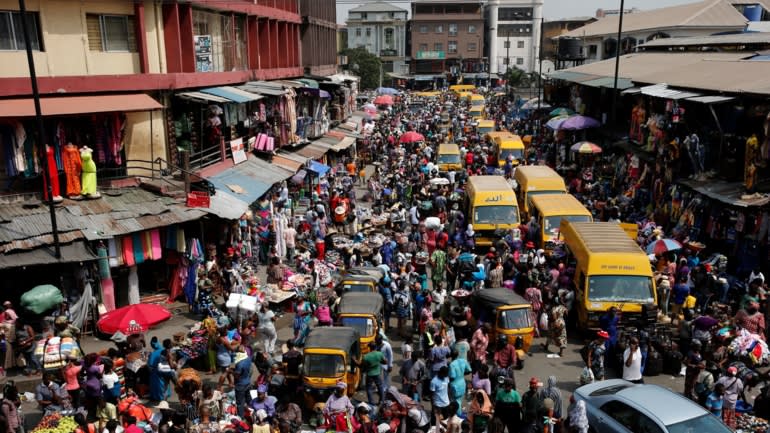 The central business district of Nigeria's commercial capital Lagos, pictured in December 2016: we will soon see the rise of African powers.   © Reuters

Finally, others understand that it is precisely Asia's good fortune to avoid the pitfalls of the West's development model and progress immediately to positive development. They argue that what Asia has done with communications skipping fixed-line telephony and going straight to mobile can be accomplished in other sectors; that they will advance the various sectors of the economy of life and become dominant there before the West is able to reposition its old economic model that is in the process of being overtaken.

Japan has a major role to play here, as the first nation in Asia to truly modernize. Much, in particular, still needs to be done to convince Asia to take Europe seriously as a partner, and not as an enemy or prey. In particular, Japan has much to learn from European culture and vice versa.

It is their role to unite on projects that are in their common interest, such as the International Thermonuclear Experimental Reactor. Located in France, this project has brought together many of the world's advanced technological skills essentially European and Japanese in an effort to create the world's first fusion reactor.

We could imagine other projects of the same scale. In particular, it is in the common interest of Europe and Asia to orient those still-developing countries in Asia, the Americas and Africa toward positive development, and help avoid the costly delays that came with negative development in the West over the last two centuries. And so many projects!