Asia's cruise industry will be forever changed by coronavirus crisis

Passengers stuck on Diamond Princess made consumers and governments panic After the Diamond Princess incident, can cruise lines convince consumers that they are clean and safe?   © Reuters
CopyCopied

Global cruise line Princess is proud of its catchy slogan "Come back new." It is an exhortation that conveys how a healthy holiday on one of its big ships refreshes and renews. The line has been extraordinarily successful in Asia, taking tens of thousands to Japan, a major market for its ships.

But now, thanks to a series of bungles by government departments which left its Diamond Princess ship stuck in dock at Yokohama, coronavirus cases spreading among guests and crew, the line has become closely linked with the COVID-19 story.

The Asian cruise industry's problem now is that consumers have a near-hysterical fear that its ships are synonymous with disease. They are not, but it is going to take time and effort for the industry to recover.

Six months ago, Singapore was the busy hub of Southeast Asian cruises, with Princess, Royal Caribbean and Carnival Cruise Lines ships making daily calls to its modern terminal at Marina Bay. More than 4 million passengers took to the seas in Asia last year for cruise holidays, including many first-timers and young families.

Japan was the number one destination by far, with almost 2,700 cruise calls in 2019, followed by China, Malaysia, Thailand and Singapore.

The industry was hailing Asia as the new frontier for a growing, largely American-owned industry, with 39 brands and 79 ships active in the region. While China's cutthroat agency sales system was a problem, brands like Norwegian retreated to more lucrative regions, the area was growing steadily and attracting luxury brands. Billions were being invested.

Illness does happen at sea. There are occasional norovirus cases, not as many as in the hotel industry. But because cruise ships are relatively new and enormously popular, they attract huge media coverage and anything that goes wrong is relentlessly examined.

What the Diamond Princess' passengers, and the Japanese health officials who decided their fate, did not know was they were about to provide the world with a real-time horror movie. Instead of disembarking, passengers were imprisoned on board while the world watched in horror at how the disease spread across the ship. Of the 3,700 people on board, more than 700 were infected and 13 have died.

The bad news continues: thousands of passengers, many elderly, are imprisoned on ships across the globe as countries refuse to let them dock in an act of peculiar hysteria against an industry that has given millions pleasant and reasonably priced holidays.

When COVID-19 first hit, it was a blow for all in the travel industry. But once the Diamond Princess made global headlines, forward cruise bookings fell off a cliff. After the U.S. Congress did not offer the industry help in its stimulus bill, major cruise lines' share prices plummeted and agents laid off staff.

So can cruise lines convince consumers that, after the Diamond Princess incident, they are clean and safe?

Important players, planning a comeback, believe so. There are plenty with an interest in making this multibillion dollar industry flourish again. 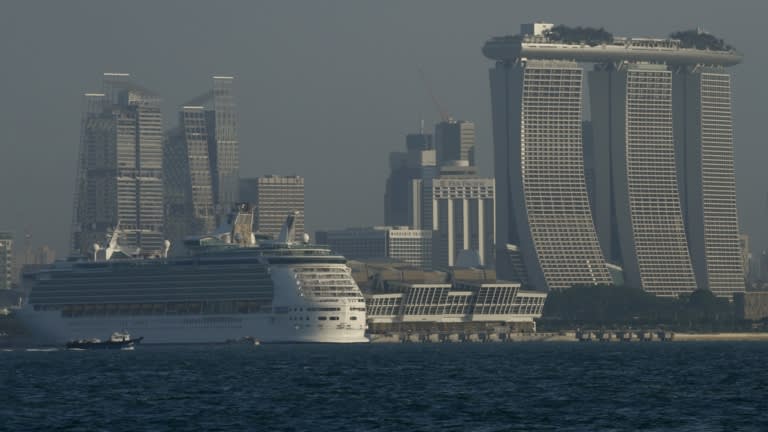 A cruise ship is docked at the Marina Bay Cruise Center: Singapore was the busy hub of Southeast Asian cruises.   © Reuters

The Singaporean government, which has invested billions in port infrastructure, and its ASEAN partners are prepared to spend money to help the cruise lines recover. Royal Caribbean, whose billion-dollar fantasy ships were among the first to be aimed directly at the Chinese market, has a lot to lose if Asia cannot be wooed back on board.

Frank Del Rio, the bullish boss of Norwegian Cruise Lines, is relying on popular amnesia: he told luxury travel agents at a forum in February he believes, after experiences with the SARS outbreak in 2003 and the 9/11 terrorist attacks in 2001, that the public's memory is about eight weeks.

That is a little too optimistic. More temperate heads think that when things start to stabilize -- Europe is still in the heat of battle and Australia is anticipating a virus peak of May or June -- we can expect to hear more about investment in air filtration systems similar to those on aircraft, which catch particles carrying disease, to win back consumer trust.

Some anticipate a grand return in 2021 as the economic aftermath subsides. Michael Goh, president of Dream Cruises, has said he continued to have faith in the resilience of Asia's cruise industry.

Cruise industry lobby group Cruise Lines International Association is working on a comeback plan, and while its emphasis will be cruising's historical safety, there will be deeper changes than a mere marketing campaign.

Bigger ships, for instance, will be harder to sell and some lines will focus on getting more revenue onboard or from shore excursions and sailing with fewer, better quality passengers. President Donald Trump's insistence that lines may need to domicile in the U.S.,  most are registered in tax havens, will mean much more regulatory scrutiny. There may well be consolidation of indebted companies too.

After COVID-19, cruising will be a renewed, cleaner, greener and more customer-focused industry. That can only be a good thing for its future and ours.