Rich Western and Asian nations must support millions of workers Employees work at a factory supplier of the H&M brand in Kandal province, pictured in December 2018: the garment industry is one of the very few job creators in Cambodia.   © Reuters
CopyCopied

Sheng Lu is an associate professor in the department of fashion and apparel studies at the University of Delaware.

After the COVID-19 pandemic reached Southeast Asia, more than 250 garment factories in Cambodia suspended operations, imperiling the livelihoods of more than 130,000 workers. Without effective support, many of these closures could become permanent.

In Bangladesh, the world's second-largest apparel exporter after China, about 1 million garment workers have seen Western fashion brands and retailers cancel more than $2.6 billion worth of orders this year so far.

What awaits these garment workers and their families are not the unemployment benefits and state support typically seen in developed countries but hunger, poverty and even humanitarian disaster.

As governments around the world plan their post-COVID-19 economic recovery strategies, then, it will mean little in some developing Asian countries unless the recovery is based on the local garment sector, a leading contributor to job creation, gender equality and social development. Western and advanced Asian economies now have a vital role to play in Asia, which accounts for 60% of this $500 billion industry.

Data from the World Trade Organization show that as much as 84% of Bangladesh's merchandise exports were apparel items in 2018. Likewise, the export-oriented garment industry is one of the very few job creators in Cambodia, directly providing jobs to nearly 930,000 workers in 2016, almost 79% of whom were female.

Making textiles requires substantial capital investment and technology, unlike the labor-intensive garment cutting and sewing process, which is why apparel factories in most developing Asian countries still rely heavily on imported yarns and fabrics, more than 80% of which are sourced from more advanced Asian economies.

COVID-19 has imposed unpresented challenges on "Factory Asia," resulting in substantial order cancellations, factory closures and job losses in the garment sector. However, the outlook for industry in the post-COVID era remains promising, for three reasons.

First, Western fashion brands and retailers still treat Asia as their single largest apparel sourcing base, with no alternative suppliers in prospect. For example, from January to May 2020 more than 80% of U.S. apparel imports, measured by both value and quantity, came from Asia. Fashion retailers have diversified sourcing away from China, but their orders have largely been fulfilled by other Asian countries -- mainly to the benefit of Bangladesh, Vietnam and elsewhere in ASEAN.

Second, thanks to years of continuous investment in automation technologies, research and development, product innovation and infrastructure, apparel made by Factory Asia is becoming ever more competitive in the world marketplace.

Western fashion brands and retailers treat Asia as a preferred sourcing destination not only because garment factories there can offer a highly competitive price, but also because Factory Asia provides other value-added benefits such as speed to market, reliability and flexibility. This is a unique but critical competitive edge that is hard to replicate for suppliers in other parts of the world.

Third, steady economic growth and rising purchasing power among consumers have turned Asia into one of the world's largest apparel consumption markets. "Made in Asia for Asia" has emerged as a critical trend benefiting garment producers in the region.

Nevertheless, if the garment sector is to be a sustainable growth engine for Asian economies in the post-COVID-19 world, all parties in the supply chain will need to put greater effort into corporate social responsibility.

We need a new normal for the garment industry which includes better treatment of workers. Garment workers in several leading Asian apparel-exporting countries currently are the poorest paid in the world, earning less than the local living wage. But the problem goes wider than earnings. It is seven years since the Rana Plaza tragedy, which killed more than 1,100 Bangladeshi garment workers, but building and fire safety is still not guaranteed for hundreds of thousands of Asian garment workers striving to make a living. 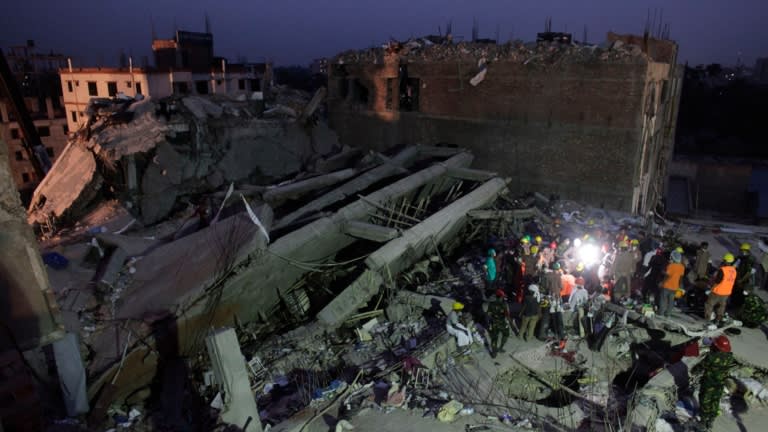 Rescuers attempt to save garment workers from the rubble of the collapsed Rana Plaza building in Savar in April 2013.   © Reuters

Broader concerns about human rights are also having an impact. In early 2020 the EU suspended Cambodia's eligibility for its Everything But Arms trade preference program because of "growing concerns about Cambodia's human rights record." Many of the reported human rights problems apply to the apparel sector directly, including a crackdown on labor unions, a lack of accountability for poor working conditions, gender discrimination, long working hours, underpayment and noncompliance with international labor standards.

It is troubling that some well-known fashion brands and retailers are doing the exact opposite. They have canceled substantial orders and used all excuses to delay or reject payment for orders already or nearly completed. Such irresponsible practices add to the financial pressures on many garment factories in Asia, leaving them with fewer resources to address social problems and take care of workers already in a vulnerable position.

What makes this sector a unique growth engine for Asian economies is its positive impact on so many workers. Now is not the time to let that falter.