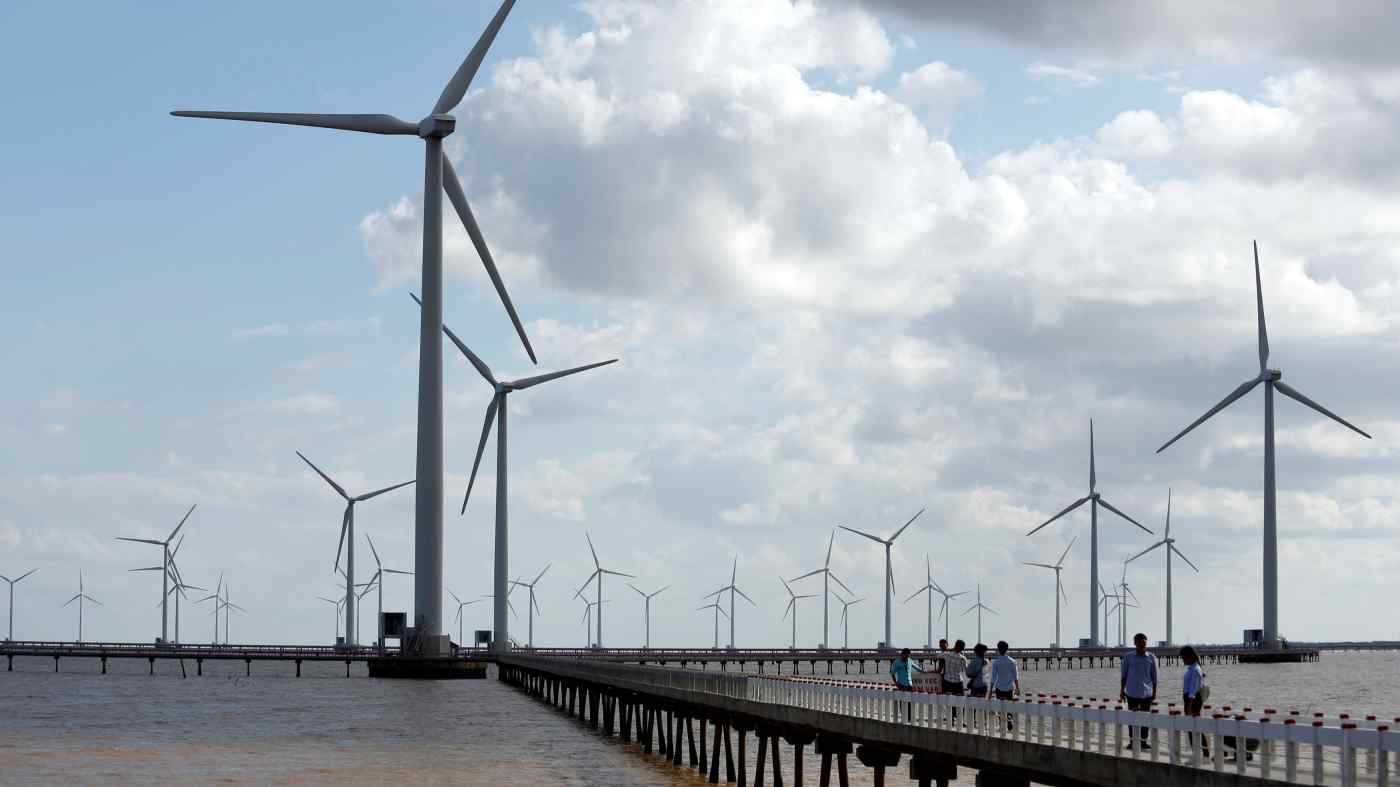 Windmill turbines in Bac Lieu province, Vietnam: the pace of growth in alternative energies could easily end up lagging the decline in oil and gas production.   © Reuters
CopyCopied

But fresh momentum on that trend injected by the coronavirus pandemic and a lower-for-longer view on oil prices poses a major risk for the energy-hungry economies of emerging Asia. There is a real danger that a dramatic plunge in investment will tighten conventional fuel supplies and cause a spike in prices over the coming decade, way before affordable green alternatives become available.

Though global oil consumption has bounced off a shocking 25% crash in April, expectations of a drawn-out and unpredictable recovery have revived rhetoric that the world may have already passed peak demand. Combined with growing pressure from investors, shareholders, and the environmental lobby, major independent oil and gas producers are stampeding their way out of the carbon-heavy sector.

Supermajor BP recently unveiled plans for a 40% slash in oil and gas production by 2030 to reduce its carbon emissions. The company came up with the bleakest assessment yet regarding the future of oil demand, predicting a fall of up 50% if global warming is limited to less than 2 degrees Celsius, or by an eye-popping 70% if the temperature rise is restricted to 1.5 degrees by 2050. Even in a business-as-usual case, BP expects global oil demand to peak by 2030 and decline thereafter. BP Eastern Trough Area Project oil platform in the North Sea: BP unveiled plans for a 40% slash in oil and gas production by 2030 to reduce its carbon emissions.   © Reuters

Fellow European oil and gas majors Shell, Eni, and Total have also hopped on to the bandwagon, pledging to reduce emissions from their operations by shrinking their oil and gas portfolios and pivoting to renewable power and biofuels.

Their U.S. peers ExxonMobil, Chevron, and ConocoPhillips are lagging on the climate change reform curve, but are nonetheless ramping up divestment of oil and gas assets around the world to shore up their cash balances.

While there are some strong opinions and broad agreement on the need to decarbonize the production, transportation and consumption of energy, there is a concerning lack of clarity and uniformity over a road map to achieve the end-goal. This is complicated by vastly differing predictions over exactly when global demand for oil will plateau.

For the Asia-Pacific, which consumes about 37% of the world's oil and accounts for the biggest regional share of demand growth, the promise of an energy utopia stocked with abundant clean fuels at some vague point in the future is cold comfort.

With alleviating energy poverty at the top of policymakers' agenda across most of Asia's developing economies, energy accessibility and affordability are key. That is why governments stress that they will count on all resources, conventional and unconventional, to create a diversified energy basket that ensures adequate and secure supplies.

Currently, renewable power accounts for only about 28% of global electricity generation, while biofuels have a meager 3% share of global transportation fuels, according to the International Energy Agency. Electrification of automobiles is now virtually a global goal, but it is a long road, with countries typically targeting the phase-out of internal combustion engines by 2050. It is also unclear how the transport sector's electricity demand could be met entirely from clean fuel sources.

Hydrogen is generating a lot of excitement as a new clean energy resource, but its commercial viability as a zero, or low-carbon, fuel is yet to be proven. If produced from natural gas or the electrolysis of water, it needs additional steps to offset its carbon footprint.

Although the world's oil majors have pledged to ratchet up investment in alternatives, and are aided by the tailwinds of rapid technological advancements, the pace of growth in these supplies could easily end up lagging the decline in oil and gas production over the coming years. The ability of these companies to sustain the level of investment needed in new energy, against the background of shrinking revenues from their traditional businesses, remains in doubt.

Meanwhile, the hastening exit of established, deep-pocketed oil and gas finders and developers is dealing a double whammy to countries in the Asia-Pacific. Oil and gas fields in the region, which typically hold smaller reserves and are less cost-efficient on a global scale, are becoming eminently dispensable as non-core assets for oil majors and other Western explorers.

Divestments in resource-rich Southeast Asian countries and Australia by companies that are desperate for cash and are aggressively rationalizing their portfolios have piled up this year. With a surfeit of properties chasing scarce buyers, deals may take longer than usual, further delaying the exploration and development of oil and gas reserves. Nor do the handful of regional national oil companies have the appetite to scoop up the equity on offer. While a new breed of independent investor is gradually appearing, these companies lack the experience and expertise of the dominant international players.

The Asia-Pacific holds just an 8% share of global oil production. As projects slow down while national oil companies, or NOCs, pare back spending and their overseas partners exit the field, the region's dependency on oil and gas imports from other parts of the world will only go up.

Globally, oil majors and other independents currently pump roughly half the world's oil needs. As this proportion drops, supplies will become more concentrated in the hands of the NOCs, many of whom are located in the geopolitically volatile Gulf.

When and if the COVID-induced squeeze on oil consumption lifts, Asia can be expected to return to being the world's biggest center of demand growth. The last thing the region's economies need blocking the road to recovery is a spike in oil prices and an unpredictable wait for cost-effective, cleaner alternatives.