Three recent events have restored momentum to the development of new long-distance and technically advanced power grids across Asia.

China had come to dominate grid technology but concerns over the leverage which Beijing could gain by controlling power supplies had put many potential developments on hold. Now, however, there are real commercial alternatives.

In May, the Indian government launched the One World, One Sun, One Grid initiative, which seeks to create a grid, supplied primarily by Indian solar resources to meet the needs of countries across western and southeast Asia. Individual Indian companies such as Sterlite Power are looking to build links across the Indian Ocean to markets in Africa where low-cost power is much needed.

At the beginning of July, the Japanese company Hitachi announced that it was taking over the power grid business of ABB, one of Europe's most advanced engineering enterprises. The combination of ABB's experience in grid development with Hitachi's digital and other technical skills will create a company able to compete on a global scale in the development of smart grids. Then at the end of July came news of Australia's plans to fast track a new 3,700-kilometer undersea link taking solar-generated electricity to Singapore via Indonesia.

Advances in grid technology, combined with continuing reductions in the cost of producing electricity from renewable sources has the capacity to transform power generation across the region. Demand continues to grow -- electricity use across Asia has risen by 68% over the last decade -- but new large scale international transmission links can make power from the lowest cost sources available to everyone.

The advantages of such schemes for both producers and consumers are considerable. Wind and solar power have zero input costs, and once the lines are in place, large volumes can be supplied over long distances with limited transmission losses. Power costs are important for business as well as individual consumers and low-cost supplies can encourage the development of energy-intensive activities such as data centers. With storage capacity built-in at the point of production -- as is the intention in Australia -- the new links eliminate the need for the backup supplies which are normally necessary to provide cover when the wind is not blowing. 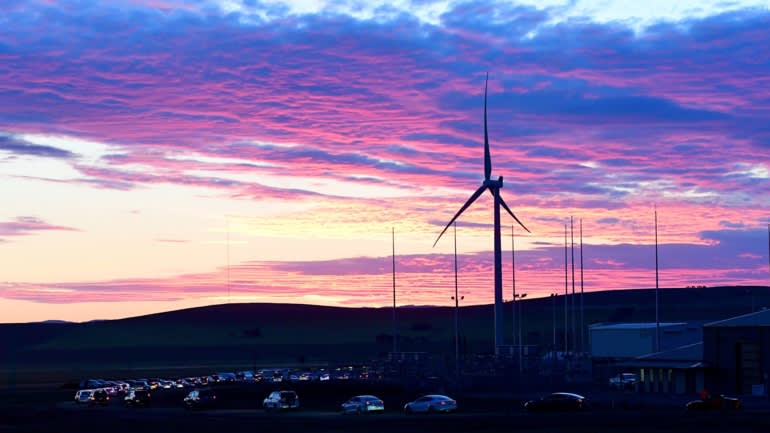 Hornsdale Wind Farm in Adelaide, pictured in September 2017: with storage capacity built-in at the point of production the new links eliminate the need for the backup supplies.   © Getty Images

But the transformation of the market will create losers as well. Electricity markets have traditionally been nationally controlled, but in many countries local producers cannot compete. The sharp decline in the costs of producing wind or solar power -- a fall respectively of 89% and 70% for unsubsidized supplies of solar and wind according to the latest global analysis from Lazard's -- will encourage electrification and put greater pressure on both coal and gas -- the two most common sources of electricity.

High volumes of low-cost renewables are also undermining the need for investment in new nuclear capacity. The International Energy Agency's estimates suggest that renewables could provide up to a third of Asia's electricity by 2030. With new grids in place, that figure could turn out to be much higher.

Those producers who saw threats to their existing business models may have come to believe that resistance to Chinese control of power supplies would halt the process. The powerful State Grid Corp. of China remains the market leader with extensive grids now operating across China, and existing external links already in place with Myanmar, Laos, and Vietnam. However several proposed international projects, including ambitious projects to build a full Asian regional grid, and taking power from China through Central Asia to Europe, are on hold mainly because of political distrust of Beijing.

Advanced long-distance power and smart grid technology is now readily available -- there is no material difference between competing offers. Companies backed by state funds -- such as State Grid Corp. might appear to have an insuperable advantage, but the suspicion of China and fears that grid connections could give Beijing leverage in any future disputes will deter many potential buyers. Trust is all-important. As the COVID pandemic has confirmed, electricity supplies are crucial to all aspects of life in the wired economy, including the need to be able to work from home.

The debate on energy security is now moving from concern about supplies of oil to the control of electricity supplies. What the new initiatives offer is the opportunity to utilize the advances in grid technology made over the last decade without the concern of reliance on a single dominant supplier. The availability of a range of credible commercial suppliers means that international trade in electricity is likely to be one of the major economic developments within Asia over the next decade, transforming the pattern of trade and creating new economic relationships.

Utilizing low-cost power in this way could also give Asian economies a cheaper route to a lower-carbon economy. On most conventional forecasts of global emissions, Asia is painted as the dirty continent because of its still increasing use of coal. The contrast is with Europe, where coal is being progressively eliminated. According to one such forecast, more than half of global emissions over the next twenty years will originate in Asia. The ability to use long-distance power from solar and wind across the region would change all that.