US-China conflict would worsen and existing alliances would suffer Ties between the U.S. and India could strengthen but it will be a marriage of convenience.   © Reuters
CopyCopied

Donald Trump's recent trip to New Delhi helped bind the U.S. and India more closely, as both grapple with how to manage their ties with China. But it marked a more significant milestone too, namely Trump's first Asian visit since his odds of reelection shifted from probable to overwhelmingly likely.

Trump looks set to run against Bernie Sanders. Having faced no primary challenge, and with a roaring economy at his back, his odds of victory are strong. Yet there remains huge complacency across Asia about what his return will mean, both for regional stability and the future of America's system of alliances.

Rather than alarm, Asian elites have grown oddly sanguine about a Trump second term, not least in India. The President's visit invited discussion of his bond with fellow strongman Narendra Modi. But personality aside, strategists in New Delhi have long since decided that Trump is helpful to India's interests, in large part because of his tough approach to China.

Few will openly praise Trump's style, but it is not hard to find similar views elsewhere, including among U.S. allies. At a recent forum in Tokyo hosted by Chatham House, the British think tank, I listened to a former senior Japanese diplomat muse that Trump was nowhere near as bad as people made him out to be, again citing his blunt style and willingness to demand change from Beijing.

Once horrified by Trump, Asia has grown familiar with him. The same was true at Davos in January, where he received a warm welcome. Given the choice between Trump and Sanders, Davos men will almost certainly want to stick with the devil they now know.

Here in Asia, the more serious manifestation of this argument suggests Trump is strategically helpful to emerging powers. This suggests, correctly, that changes are needed to Asia's existing economic and security setup, to accommodate China but also other emerging powers, such as India and Indonesia.

India's cerebral minister of external affairs Subrahmanyam Jaishankar describes countries like India as "leading powers," meaning that they want to help shape important rules and institutions. In effect thinkers like Jaishankar want a new Asian balance of power which is less reliant on the U.S. They thus see Trump as handmaiden to a necessary and inevitable regional shake-up.

This brand of thinking is seductive. But it is also too clever by half, especially given the dangers presented by two looming features of a Trump second term, the first being worsening conflict with China.

Rather than a gradual de-escalation of tariffs, Trump is likely to bring in further restrictions on Chinese tech companies, while also trying to remove U.S.-led supply chains from China. The worsening coronavirus crisis, which has shown the extent to which multinationals are reliant on Chinese components, is only likely further to convince Trump of the perils of economic interdependence.

Existing U.S. alliances with Japan, Korea and the Philippines, all of which are already in a parlous state, are the second likely casualty of a Trump reelection.

In mid-February Trump said he would welcome the end of a long-standing military pact with the Philippines, one of the cornerstones of a broader alliance. He has already demanded a fivefold jump in the money South Korea pays to keep U.S. troops. Similar demands for a bump up from Tokyo next year are likely later this year. 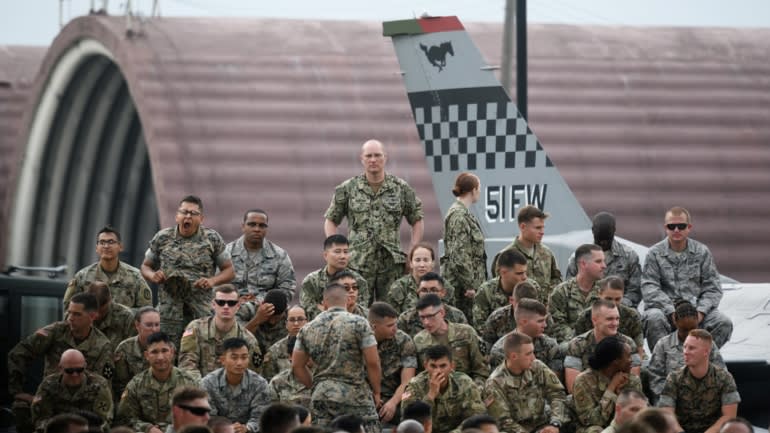 U.S. soldiers based in Osan Air Base, South Korea, pictured in June 2019: Trump has demanded a fivefold jump in the money South Korea pays.   © Reuters

In general, Trump views U.S. alliances as shakedown operations, involving payment for military and diplomatic protection, rather than partnerships based on shared interests and values.

At its riskiest, this suggests scenarios where countries like Japan and Korea begin to rearming militarily over the medium term, including acquiring nuclear weapons, because they can no longer rely on the U.S. as a balance against China.

Even if that does not happen, these two trends suggest growing regional instability. Deciding either to provoke China or blow up alliances would be damaging individually. Doing both at the same time is a recipe for potential crisis.

Not all U.S. relationships will be badly damaged by a second term Trump presidency. Ties with India could even strengthen. But this will be a marriage of convenience rather than the axis of democracies traditional U.S. foreign policy thinkers have hoped to build.

And even here there are problems. Very Stable Genius, a recent book on Trump, recounts an eye-opening story of a meeting with Modi, in which Trump revealed his lack of knowledge on basic regional geography by telling the Indian leader: "It's not like you've got China on your border." A visibly shocked Modi reportedly later told his aides: "This is not a serious man. I cannot count on this man as a partner."

It is of course conceivable that Asia's leaders will have to deal with President Sanders instead. But the odds of Trump's return are growing, and with them a long-term shift in U.S. behavior. A country which once acted as a solver of Asia's problems is now more likely to create them instead. Many in Asia quietly hoping for a Trump win should be careful what they wish for.