Australia can learn from Tokyo's smarter approach to China

Japan has played its Beijing cards more intelligently than Canberra Japan is in lockstep with Australia on China.   © Reuters
CopyCopied

Richard McGregor is a senior fellow for east Asia at the Lowy Institute. He is author of "Asia's Reckoning: China, Japan, and the Fate of U.S. Power in the Pacific Century."

"You are not walking alone," says Shingo Yamagami, Tokyo's ambassador to Canberra, who has delivered this message to Australians nonstop since taking up his post in late 2020.

Yamagami is, of course, referring to the travails of Japan and Australia with China, which is the largest trading partner of both nations, and also seen as their most significant security threat.

He is perhaps the most high-profile Japanese Ambassador ever to Australia. In intimate dinners at his residence and in public speeches across the country, the message is the same. Japan is in lockstep with Australia on China.

Yamagami is mostly right, as indicated by the planned signing on Thursday between Scott Morrison and Fumio Kishida of a Reciprocal Access Agreement (RAA) defense treaty to facilitate joint military exercises and exchanges. 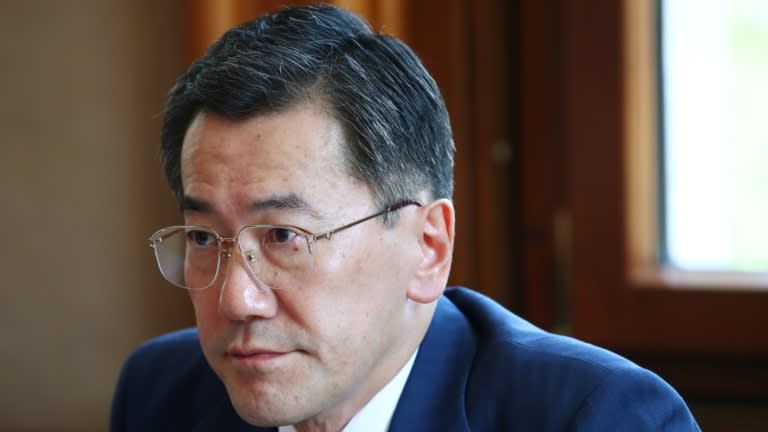 The agreement means Australian and Japanese forces will be able to train in each other's countries and engage in joint military exercises and disaster support. There will be fewer barriers in transferring weapons and military supplies.

To underline its importance, the Japanese prime minister was due to travel to Australia for the deal's signing, although the COVID spread Down Under may mean the deal is inked virtually.

Still, the symbolism is potent. If Kishida comes, it would be his first overseas summit meeting since taking the top job in September. More importantly, this is the first such defense agreement Japan has signed with a country other than the U.S.

The year just passed has already seen the start of a radical reorganization of regional and global security architecture to grapple with China's rise under Xi Jinping.

A leader-level meeting of the QUAD, with the U.S., Japan, India and Australia. A deal with the U.S. and the U.K. for Australia to acquire nuclear submarines. NATO marking China as a potential security threat. And now, the Japan-Australia defense deal.

China is taking notice. Although it is not rethinking its geopolitical ambitions, Beijing is being forced to recalibrate them in a year that coincides with the National Congress of the Chinese Communist Party designed to consecrate Xi for a norm-defying third term.

The tighter ties between Japan and Australia have been a long time coming, but they are instructive of a changing world nonetheless. The two nations have been economic partners since the late 1950s, as Japan tapped Australian resources for its postwar boom, but they took much longer to become deeply aligned politically. Such relationships require trust, and that meant burying for good the ill will leftover from the Pacific War.

Shinzo Abe never really invested much political capital in burying the history issue with China and South Korea. For all his blind spots in this area, Abe judged probably correctly that the internal politics of both countries are firmly set against a rapprochement with Tokyo. History still casts a long shadow in East Asia, and no Japanese leader, let alone one without Abe's baggage, has been able to set the issue aside.

But elsewhere, especially in Australia and Southeast Asia, the world has moved on. With some exceptions -- none of them material -- the war is seen in the rearview mirror these days. A democratic Japan has become a trusted partner. Scott Morrison once named Abe as the politician he most admired and looked to for guidance. Even a decade ago in Australia, that would have been a discordant call. But no longer.

Still, despite the bilateral embrace, Australian leaders have a limited understanding of Japan's China policy. Australia's blind spot is to see other nations as hawkish in the same way that it is.

Generally, Australians take Ambassador Yamagami's sound bite -- "You are not walking alone" -- at face value. The few months of the Kishida administration, however, have displayed the distinctive personal and political tensions around the China issue in Japan.

Abe and his brother, Defense Minister Nobuo Kishi have made strong statements about the importance of Taiwan to Japan's security interests, infuriating Beijing, where the pair are intensely disliked anyway because of their family lineage tied to their grandfather, Nobusuke Kishi who served in the wartime cabinet and was later a conservative, pro-U.S. prime minister.

Abe was furious at Kishida's choice of Foreign Minister, Yoshimasa Hayashi, considered to be at the softer end of China policy, who still believes that dialogue with Beijing can help. Abe's distaste for Hayashi is probably as much driven by their local rivalry. They both represent districts in Yamaguchi prefecture and compete for influence there. Kishida, too, having served as Abe's foreign minister for five years, doubtless did not want his choice of Japan's chief diplomat to be dictated by his former boss. Yoshimasa Hayashi, pictured in November 2021: Kishida's choice of Foreign Minister is considered to be at the softer end of China policy.   © AP

Unlike in Australia, Japanese business remains outspoken about the value of the Chinese trade and investment relationship. Its views are reflected in the political system and the numerous back-channel ties between Japanese politicians and Beijing that Australia does not have.

Whatever the tensions over China policy, it is true there is unanimous support in Tokyo for the U.S.-Japan alliance. As Beijing has become more assertive, the spectrum of differences on China in Tokyo has narrowed. Japanese conservatives have always pressed Australia to stand up against Chinese pressure and have complimented them when they have. They mean every word of it.

But Japan has played its cards on China more intelligently than Australia. However emollient the Ambassador's compliments may be, perhaps Australia should start learning from Japan rather than the other way around.