Australia loves China's money. What about its people? Scott Morrison has had to reassure Chinese Australians that the falling out with China does not mean he does not love them.   © AP
CopyCopied

Sarah Gilbert is a freelance journalist based in Sydney.

Australia's Chinese community frequently finds itself in a tight spot when tensions boil over between its adopted and ancestral homelands.

The tweet that started the most recent flare-up depicted an Australian soldier holding a knife to the throat of an Afghan child, offending Australian nationalist sentiment as well as Prime Minister Scott Morrison, who demanded an apology.

Unsurprisingly, that apology has not been forthcoming. Instead, it has been Morrison who has had to reassure Chinese Australians that the falling out with China does not mean he does not love them. Morrison even took to WeChat last week to declare that Australia's leaders "recognize, deeply appreciate and value the contributions that generations of Chinese immigrants have made to Australia."

While tensions between the countries have been building for years, Australia's call for an international inquiry into the source and origins of COVID-19 in April was the catalyst for a series of retaliatory actions that has left many people wondering whether Canberra has mishandled relations with our most important economic partner. 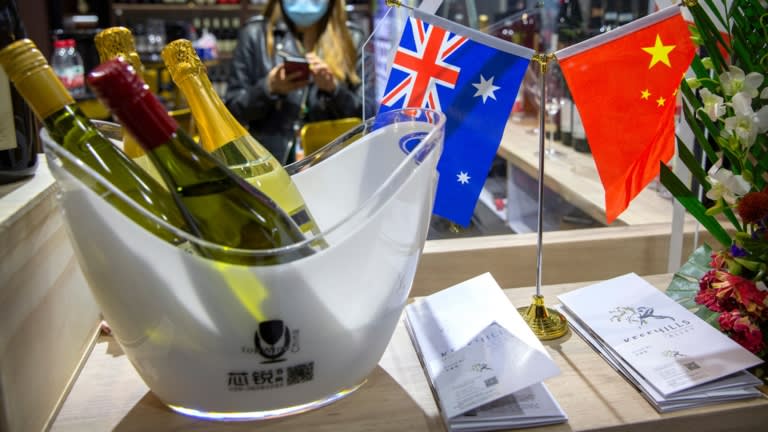 Australian wines at the China International Import Expo in Shanghai, pictured on Nov. 5: many people wonder whether Canberra has mishandled relations with thier most important economic partner.   © AP

What the current rift reveals, yet again, is that while Australia recognizes that its destiny is tied to China, it has never been able to get comfortable with that fact. As early as 1788, when Australia was first settled by Europeans, British imperialists had their eye on China. Those same ships that offloaded convicts in New South Wales returned to England laden with Cantonese tea.

In the 232 years since, Australia has wanted it both ways: happy to have Chinese indentured workers make up the labor shortfall once the convicts stopped coming, but not so happy when they abandoned their flocks of sheep and headed to the goldfields to establish successful businesses. Throughout the 1800s, Chinese immigrants asserted their claims to equal status, but in return they got only boycotts of their products and suspicions regarding their allegiances.

When the Morrison Government recently announced a tougher English test for migrants entering on spouse visas, it brought back memories of the dictation test at the heart of the notorious White Australia policy. For decades, non-white would-be migrants with perfectly serviceable English could be tested in Gaelic, Hungarian or any other language -- a farcical situation that meant Australia could keep out undesirables without having to enact racist immigration laws.

Chief among those undesirables were Asians, mainly Chinese. Many second and third-generation Chinese Australian families who had settled here for good were issued with identity cards, and barely tolerated in their adopted home. Decades after the White Australia policy was finally dismantled in 1973, Chinese Australians still had to put up with the occasional politician denouncing Asian immigration as a danger to Australia's identity.

Conservative politician Eric Abetz caused a storm of outrage in October when he demanded that three Chinese-Australians appearing before a Senate inquiry condemn "the Chinese Communist Party dictatorship." One of the witnesses, Osmond Chiu, likened the experience to being "dragged in front of the House Committee on Un-American Activities," and refused to answer.

Another witness, academic Yun Jiang, said Chinese Australians regularly found themselves caught in the middle of a toxic dilemma. "If they criticize the Chinese Government, then their family may face trouble or they may have difficulties going to China in the future," Jiang said. "If they criticize the Australian Government, they are suspected of being an agent for foreign influence."

Senator Abetz, the foreign-born son of West German migrants and the great-nephew of a convicted Nazi war criminal, only ever has his loyalty questioned by Twitter trolls. I have no idea whether the then three-year-old Abetz -- or his parents -- spoke fluent English when they arrived to start their new lives in Australia. What is certain is that millions of Australians are here thanks to forebears who arrived with little besides their native language and a willingness to learn a new one.

Australia's luxury of splendid isolation in the face of COVID-19 now means that its international border is shut to all but New Zealanders. And while we enjoy summer as-almost-usual -- crowded beaches, slightly less crowded COVID-safe bars and cinemas -- our economic well-being faces another threat, ironically, from a sudden fall in annual immigration.

In May, Morrison estimated that just 34,000 newcomers would arrive in the year ahead -- a vertiginous fall from pre-virus predictions of around 270,000. The impacts are sure to be huge and long-lasting, particularly when added to the massive drop in foreign students who prop up our universities, most of them from China. In this climate, it is hard to imagine why the government wants to send signals that Australia less than warmly welcoming.

Scott Morrison is now heading into Christmas on the back foot, with critics saying he has no strategy for how to repair the relationship with China, or manage it over the long-term. Meanwhile, with his WeChat olive branch blocked by Chinese censors, he fronted the media alongside his health minister, once more reassuring Chinese Australians that they are all treasured members of the great Australian multicultural family.

One young journalist, Jessica Yun, was quick to notice that the press conference soon descended into cliched gags between the PM and his sidekick about Chinese takeaway and prawn crackers. Someone ought to tell Morrison that trading in stereotypes will not do much to help his cause.