Australia needs clear message when it comes to Chinese meddling

Scott Morrison's government has no strategy to deal with Beijing's rise

In late November, Australian media reported that authorities were investigating claims that a Chinese secret intelligence group had offered one million Australian dollars ($680,000) for a Chinese-born Australian citizen to contest a seat in federal parliament. The Australian Security Intelligence Organisation said the general broad of Chinese interference was "unprecedented."

These allegations followed separate claims from a Chinese defector to Australia, Wang Liqiang, that he had worked as a spy in Hong Kong and Taiwan.

While not all security experts have said these claims are credible, reports of Chinese espionage have added fuel to long-running debates about how far Beijing's influence in Australian politics stretches and the extent to which Australia should accommodate rising China. What the country needs now is a coherent message, not the present muddle.

In general, the debate is between security experts concerned about Beijing's capacity to interfere in Australia's electoral politics and those in the business community who promote the continuing importance of China as a trading partner. But this split between security and economics is a false one, and polarization makes it challenging to craft a nuanced and balanced China policy.

Similarly, there are divisions within the Australian government and policymaking apparatus. At times, the government has attempted to soften its language on China and reassure Beijing about Canberra's commitment to the relationship.

Yet some members of his Liberal-National Coalition have taken an avowedly anti-China stance. Liberal MP Andrew Hastie likened Australia's attitude to China to the West's appeasement of Nazi Germany before world war two. Hastie and fellow Liberal senator James Paterson were denied a visa to travel to Beijing this month after their criticism of China.

Public pressure has also compelled the Minister for Foreign Affairs, Marise Payne, to say that China must be held to account for human rights abuses against the Uighur community in Xinjiang province.

The politics of Australia's relationship with China are complex and elude easy answers. One can understand why its politicians are reluctant to risk such an important trade relationship -- over 30% of exports flow to China. 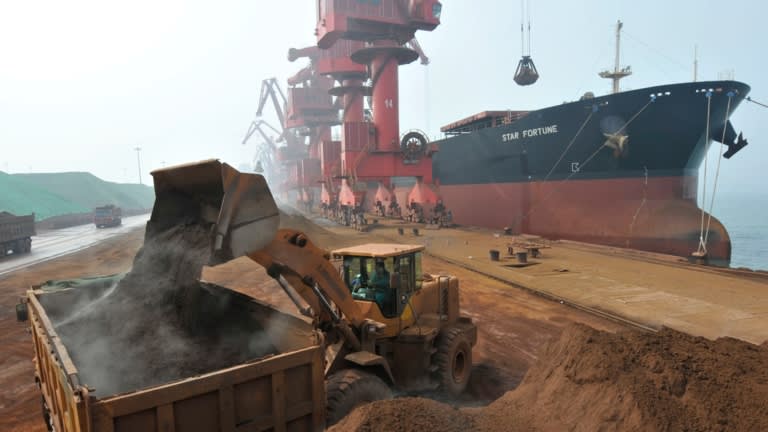 Iron ore from Australia is unloaded at Rizhao Port, China: Australia's politicians are reluctant to risk an important trade relationship with China where more than 30% of its exports flow to.   © Reuters

While Australian governments have attempted to diversify economic and political relationships toward other rising powers in the region, its general stance has been to rely on the U.S. alliance, despite the erratic behavior of the Trump administration.

Australia's Indo-Pacific concept has increased engagement with India to hedge against great power dependence. It commissioned a 500-page report outlining a strategy for a deeper economic relationship with India, yet the new Morrison government released it with little fanfare. This undermined its impact and led to questions about the government's commitment to developing ties with India.

The region has now entered a period of explicit great power competition. While other states in the region seek to avoid choosing sides, Australia's approach has been to pay lipservice to diversification while eschewing making difficult policy decisions -- a business-as-usual approach that fails to deal with the realities of the end of U.S. regional primacy.

There are exceptions, of course -- the introduction of legislation against foreign interference by Malcolm Turnbull's government is one example of a risky policy that provoked retaliation from Beijing.

As my colleague James Leibold and I have previously argued, states like Australia need to band together to resist economic coercion. This means paying substantive attention to diversifying foreign and economic policy in the region. Yet it cannot just ignore the reality of its reliance on China in trade or the potential that China will be a regional hegemon in years to come.

There are real challenges in terms of how to craft effective responses to issues such as the human rights abuses in Xinjiang. Recent efforts by the Australian government to undermine democratic institutions and principles -- such as a free press -- mean that challenges to democracy come from inside as well as outside.

While Chinese intervention would constitute a threat to Australian democracy, responses that seek to marginalize or cast suspicion on the Chinese-Australian community also risk damaging Australia's democracy and the liberal rights of these citizens.

Policy leaders in their rhetoric cling to the notion that Australia does not need to choose sides between China and the U.S. While this may be the case, at the very least it needs a coherent message on China. Bec Strating is a senior lecturer in politics and international relations at La Trobe University, Australia.