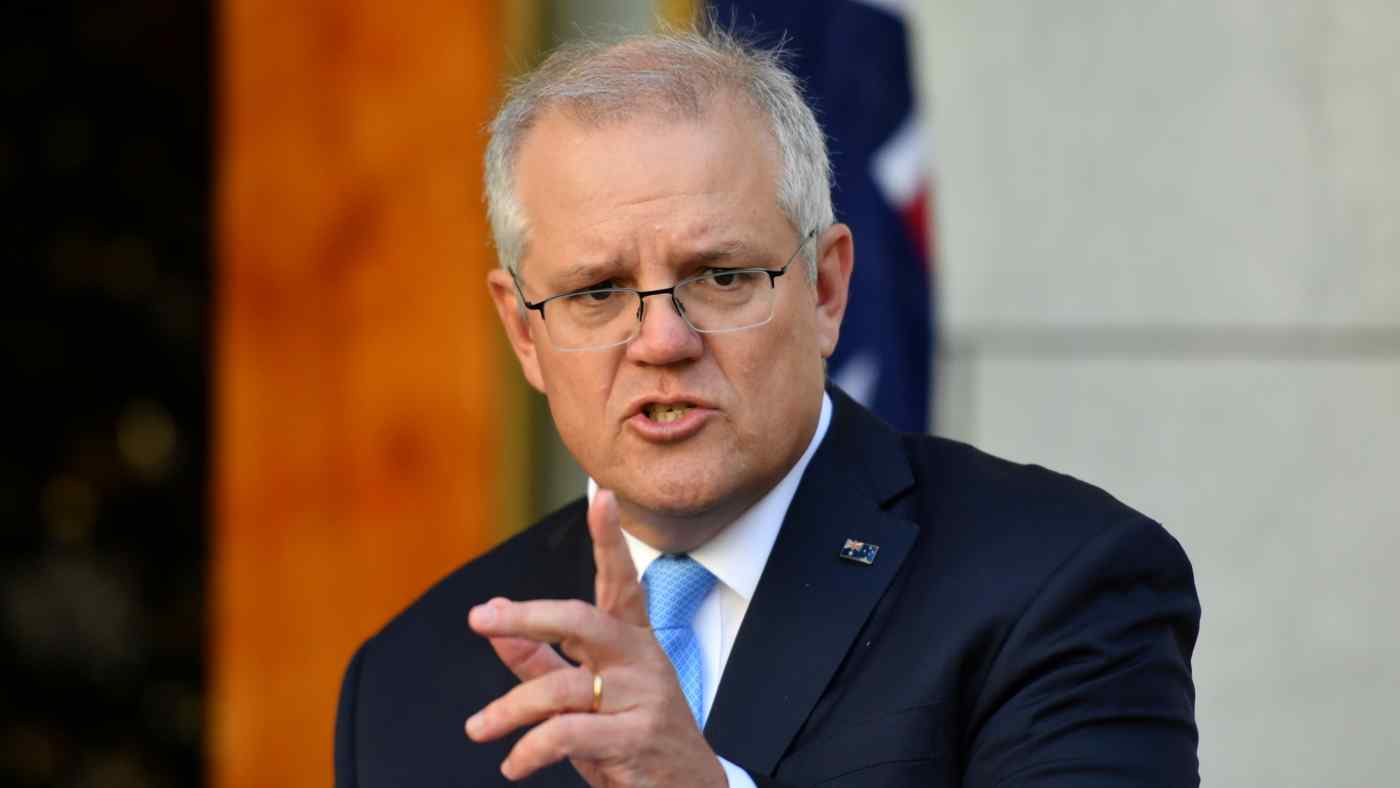 Australia's Prime Minister Scott Morrison, pictured on Dec. 11: many countries are watching how his forthright approach to China plays out.   © APP/Reuters
CopyCopied

When the Australian government called last April for an independent inquiry into the origins of the coronavirus pandemic, few anticipated the resulting breakdown in bilateral relations with China.

Super-sensitive about charges of a COVID cover-up, Beijing has ratcheted up trade sanctions in various forms on Australian beef, barley, coal, timber and latterly the wine industry. Altogether, about $21 billion of Australia's $147 billion in goods and services exports to China have been affected. Only iron ore -- where China remains dependent on supplies to its mighty steel sector -- has been spared.

China has over the years used access to its domestic market as a weapon against other Asian neighbors such as Japan and South Korea which have attracted its ire. As the economic cost mounts, some business leaders in Australia are turning jittery. "We don't understand why the Federal Government picked a fight with our biggest customer," James Robson, owner of Ross Hill Wines in New South Wales, told Australia's national broadcaster ABC.

China has upped the ante against Australia with its "wolf warrior" diplomacy, a mix of taunts and threats which culminated this month in a Chinese Foreign Ministry spokesman tweeting a fake image of a grinning soldier holding a bloodied knife to a child's throat. 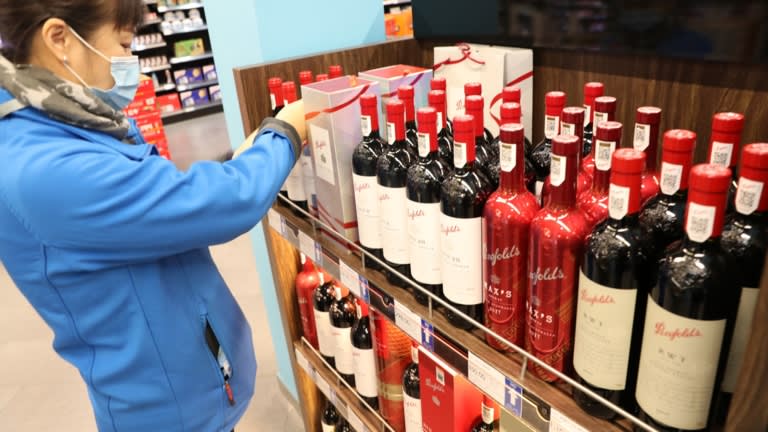 Bottles of wine imported from Australia are displayed at a supermarket in Nantong on Nov. 27: Beijing has ratcheted up trade sanctions on Australian wine industry.   © VCG/Getty Images

The post purported to highlight alleged unlawful killings and abuse by Australian special forces in Afghanistan, which the Canberra authorities are investigating. The tweet was also a form of defense-as-offense. China was implicitly accusing Australia of double standards, a means of deflecting criticism of Chinese human rights violations against the Uigher population in Xinjiang.

While Prime Minister Scott Morrison's outraged response was somewhat cack-handed (he demanded a right of reply over WeChat and was inevitably snubbed), China's economic squeeze highlights a broader strategic dilemma for Australia: how to balance relations with its biggest economic customer while safeguarding its own independent decision-making and security dependence on the U.S.

Australia's maneuver room depends on a regional equilibrium in which America's Pacific presence is paramount. It is worth remembering that "The Land Down Under" has fought in almost every major "Western" war including World Wars I and II, Vietnam and Afghanistan. But in the 21st century, Australia, demographically and economically, has shifted from a post-colonial, "Western" country to a more "Asian" nation located in the shadow of an increasingly powerful China.

Back in the mid-1990s, amid suspicions that Canberra was siding with the U.S. over greater autonomy for Hong Kong and Taiwan, China's response was characteristically pointed. A Chinese publication compared Australia to a bat which gives its allegiance to mammals when they are in the ascendancy, but later declares itself to be a bird when birds turn out to be the victors.

During Morrison's tenure, this diplomatic straddle has become even more awkward. "Our preference is not to be forced into any binary choices," he said, acknowledging that the foreign policy challenge for all Indo-Pacific countries in an era of global competition between the U.S. and China is more complex than during the Cold War.

Over the past four years, the outgoing Trump administration's robust approach toward China has been felt from Europe to Asia. Australia's conservative government has responded accordingly. In 2018, it was the first country to publicly bar China's Huawei Technologies from its fifth-generation, or 5G, wireless networks. As a member of the highly prized Five Eyes intelligence alliance also comprising the U.S., the U.K., Canada, and New Zealand, it remains determined to stick close to Washington, whether Republicans or Democrats are in charge of the White House.

During the Obama presidency, the U.S. proclaimed a "tilt" toward Asia, but Australia felt there was less substance to the slogan than reality. More recently, even as its economic dependence on China has grown, Australian foreign policy has tilted more toward the security dimension.

This includes a pending status of forces agreement with Japan, greater attention to Southeast Asia and closer relations with the EU. In 2021, this could lead to Australia joining a putative D-10 forum of democratic nations convened by Boris Johnson's government in the U.K. which would include India, Japan and South Korea.

Still, grand strategy is no substitute for sound day-to-day diplomacy. Veteran diplomats were surprised by Morrison deigning to respond to a tweet by a mid-ranking Chinese diplomat, albeit a younger generation nationalist with 750,000 followers on Twitter.

A more effective approach would have been more measured Japanese-style criticism or a collective statement of solidarity by like-minded allies. The latter would certainly have been a safer bet than Australia's shoot-from-the-lip style, highlighted by the call for an inquiry into the origins of COVID. In retrospect it looks what Sir Humphrey Appleby, the fictitious British civil servant in the political satire "Yes Minister," would call "very brave" (translation: ill-judged).

Many countries are nevertheless watching how Australia's forthright approach to China plays out. In London, where anti-China sentiment in the ruling Conservative party has taken hold, the view is that closer economic relations with China leave countries vulnerable to political bullying. On this reading, Australia's stand will prove not just brave but prescient.