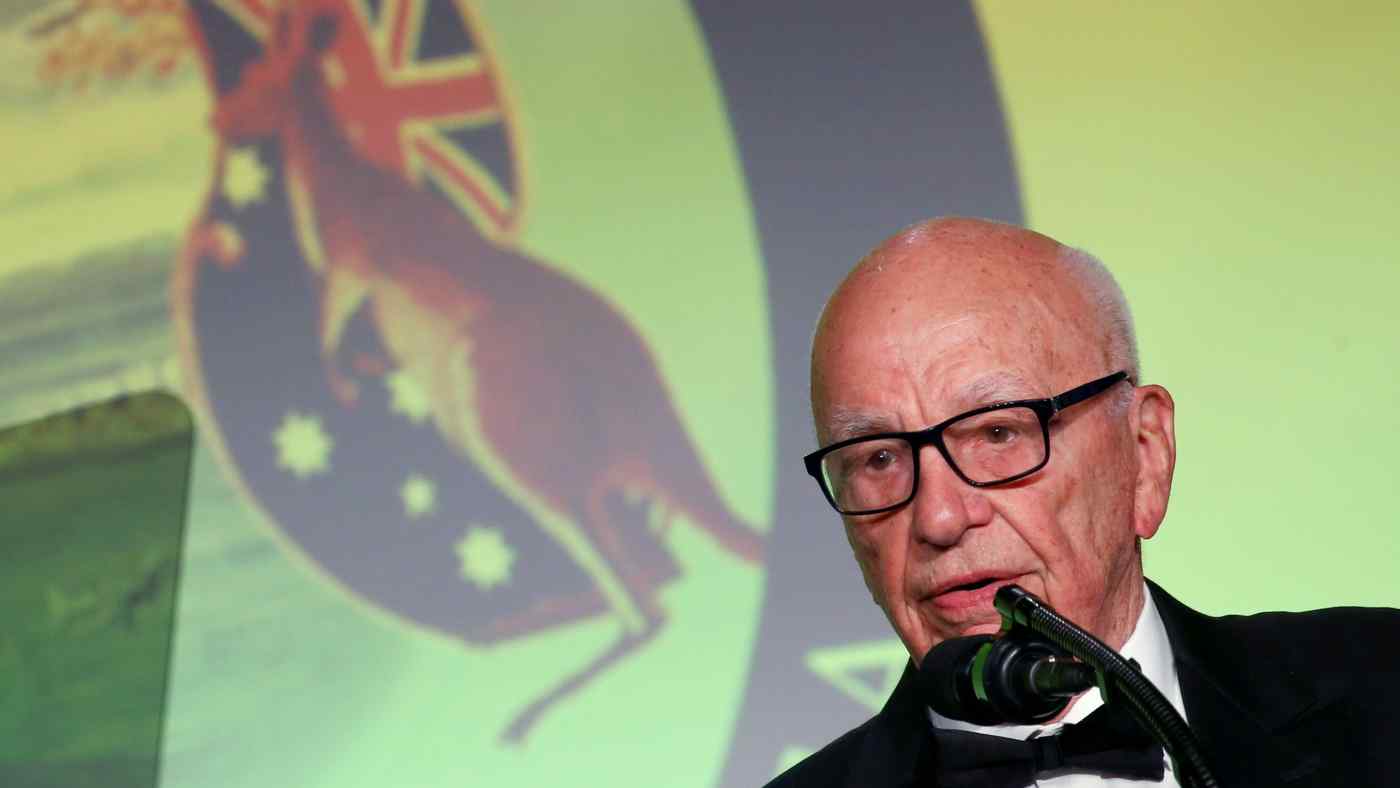 Media mogul Rupert Murdoch, pictured in May 2017: politicians are pushing the proposal as a favor to their preferred news organizations, including the Murdoch media empire.   © Reuters
CopyCopied

The experience of online life is one of information overload -- it is not always easy to separate the signal from the noise. This problem has been made worse as advertising dollars have flowed away from traditional media organizations toward tech platforms.

In the U.S., for example, newspapers have shed half of their newsroom employees since 2008. This shift in the commercial dynamics of news production has also affected Asia, where many news organizations have become more dependent on government sponsorship. Quality, independent news media has dried up over the last decade, at a time when we need it more than ever. Tech platforms, meanwhile, have pocketed record profits.

Australia has proposed a solution to this. The competition regulator last year recommended an arbitration system between tech platforms and news organizations. Tech companies would be required to negotiate to pay news organizations for links to stories posted on their platforms. If a bargain could not be reached, then an arbitrator would set the price. This proposal was drafted as a bill that is currently before the Australian parliament. The bill was referred to a parliamentary committee, which has heard evidence from a range of stakeholders, and is due to publish its report today. After that, politicians will have a chance to vote on whether it should become law.

It is a deceptively simple scheme that contains some serious problems. First, it represents a fundamental shift in the basic functioning of the web. In a submission to the parliamentary committee, Tim Berners-Lee, the inventor of the web, points out that a proposal to charge a fee to link between webpages is unprecedented, and not in a good way.

"The ability to link freely," he wrote, meaning without limitation as to the content or the imposition of monetary fees, "is fundamental to how the web operates, how it has flourished till present, and how it will continue to grow in decades to come." Should this proposal become law, it sets a precedent that governments can impose policies that undermine the freedom and openness of the web. There may be no limit to the proliferation of this kind of arrangement.

Of course, there are reasons this proposal is compelling. Tech giants for too long have been exploiting users by monetizing their data for the purposes of selling advertising. Their obscene profits, squirreled away in various tax havens, have come at the expense of many things, including our capacity to engage in online life with autonomy.

In the case of Facebook, its business model has produced a platform that encourages endless time on devices, promotes virality and facilitates microtargeting in advertising -- all of which underpins the trend toward extremism and filter bubbles. The profits of tech platforms have come at a cost to our sense of a common public domain online.

In its evidence to the committee, Google threatened to pull its search engine from Australia should this bill became law. To many, this seemed like unseemly hubris. Tech platforms have exploited our data to become disgustingly powerful and profitable, and now they were threatening to quash attempts to hold them to account.

Google threatened to pull its search engine from Australia should this bill became law.   © Reuters

But instead of undermining data extractive business models, the Australian government's proposal will serve to entrench them. As part of the proposed code, news organizations would get access to information about how algorithms rank their stories and any changes to this by tech platforms in order to allow them to respond better.

News organizations will also be permitted to access data about users of tech platforms who click through to their sites. Instead of criticizing an approach of monetizing user engagement at the expense of privacy, news organizations are trying to get in on the action. If passed, this bill would align the traditional media and tech platforms against the interests of users.

Meanwhile, it is important to remember that the web has actually facilitated a more diverse media landscape than ever before. Whether it is video channels, podcasting or newsletters, more independent journalists are finding an audience for their work, in ways that were unimaginable a decade ago.

Many of these content producers would likely fail to satisfy the various eligibility criteria contained in the proposed law to access the arbitration system. If you are starting to wonder why it is drafted in this way you are not alone. The most obvious explanation is that politicians are pushing this proposal as a favor to their preferred news organizations, including Rupert Murdoch's media empire that dominates Australia's media landscape.

A quality, diverse news media is more necessary than ever, but it must be one that is designed to serve the public, not profit.