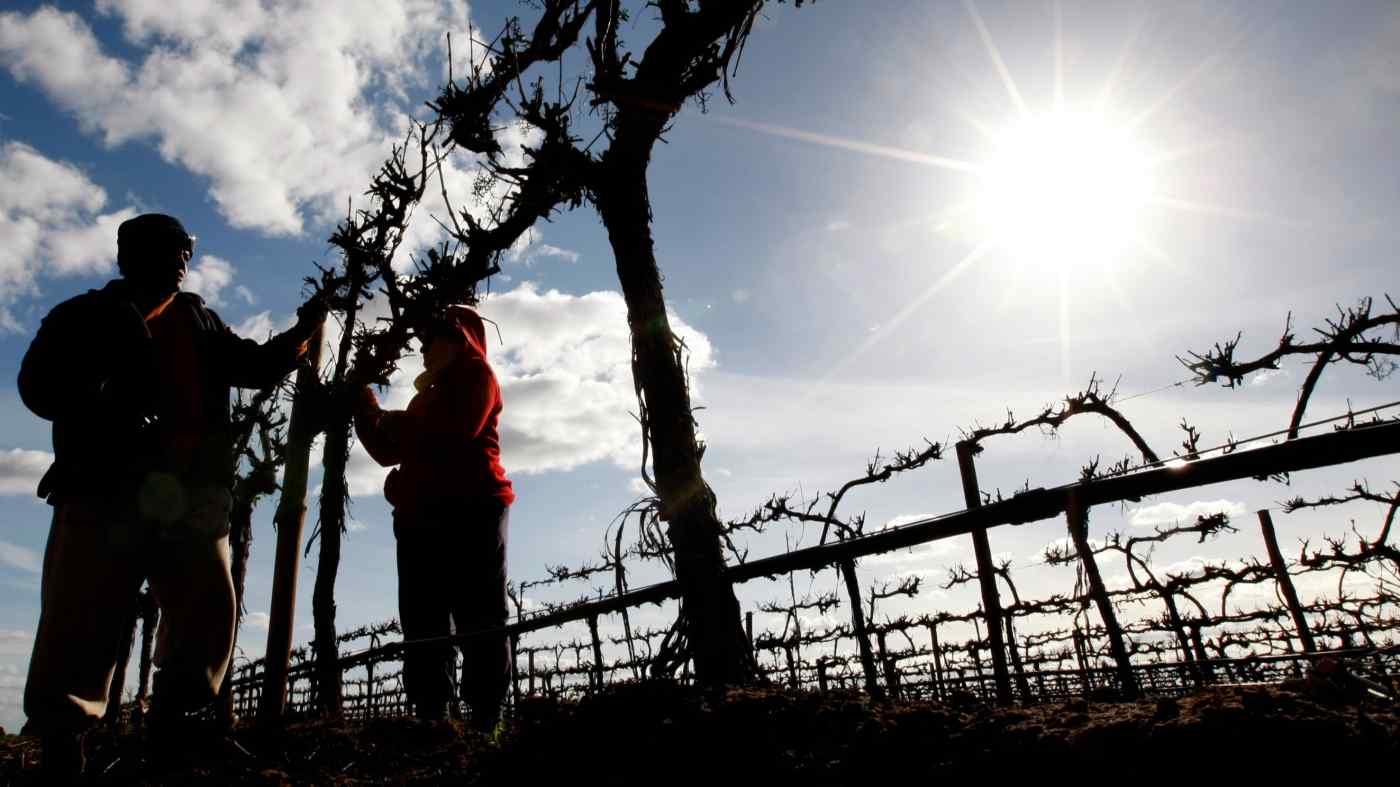 Farmworkers prune Merlot vines on a farm near Griffith, Australia: they talk of piece rates that can sometimes yield as little as 3.00 Australian dollars an hour.   © Reuters
CopyCopied

Hamish McDonald is a former foreign editor of The Sydney Morning Herald and regional editor of the Far Eastern Economic Review.

Out of sight, out of mind could be the Australian government's mantra when it comes to awkward worker compensation issues. At the start of the supply chain that brings Australian fruit and vegetables to consumers in both domestic and overseas markets, there have long been troubling stories about the workers who labor in fields and orchards to harvest the bounty.

Go to a town like Bundaberg -- center of a region known for crops of avocados, macadamia nuts, passion fruit, sweet potatoes and sugar cane, as well as lending its name to the country's leading brand of rum -- and you will hear talk of modern-day slavery from young backpacker and Pacific Islander workers.

They talk of piece rates replacing official hourly rates that can sometimes yield as little as 3.00 Australian dollars ($2.25) an hour, and jobs made conditional on taking employer-tied accommodation in cabin camps and abandoned pubs featuring up to 12 bunk-beds per room, for which each worker must pay AU$200 a week.

Visa conditions put such workers in a weak bargaining position with growers, who themselves face downward pressure on produce prices from big supermarket chains, with backpackers needing 88 certified days on farms if they want to extend their working holiday visas for another year. Workers from the nine Pacific island nations included in the Seasonal Workers Program who are dubbed non-performers are sent home and can be excluded from further intakes.

COVID has temporarily changed the situation, with closed borders sharply cutting the numbers of available workers. For the moment, the workers have the upper hand. Desperate growers are adding bonuses to minimum award rates that used to be the ceiling.

"There's not enough workers to go round," one Bundaberg grower told me on a recent trip. "Once all this bullshit's over and all the backpackers come back, the boot'll be on the other foot. Now the boot's on their foot, kicking our arses."

Prime Minister Scott Morrison's desultory efforts to persuade young employed Australians to take farm work have failed, with widespread anecdotal evidence that growers do not want them and that labor recruitment contractors actively block them. Raising wages might help.

Now the government has turned to another source of labor in a new scheme that critics say is fraught with exploitation risks, will damage Australia's regional standing, and fail to capitalize on an important strategic opportunity.

On the sidelines of the recent Group of Seven summit, Morrison and his British counterpart Boris Johnson reached an in-principle agreement on a bilateral free trade deal that includes reciprocal access for up to three years for young British workers. Under the deal, Morrison agreed to remove the 88-day farm work requirement for young Britons. Free to look for work elsewhere, this would create an estimated 10,000-worker gap in the fruit-picking labor force. Boris Johnson greets Scott Morrison during the G-7 summit in Carbis Bay, Cornwall, on June 12: they reached an in-principle agreement on a bilateral free trade deal that includes reciprocal access for up to three years for young British workers.   © Reuters

To cover the shortfall, Morrison announced a new visa category for agricultural laborers from the 10-member Association of Southeast Asian Nations, who will be able to work on Australian farms for nine months a year, over three years.

"All workers under the existing labor scheme and the new seasonal agriculture worker visa will be covered by the same workplace laws, entitlements and protections as Australian citizens and permanent residents," Minister for Agriculture David Littleproud told Nikkei Asia.

Still, details of the new visa scheme remain incomplete, he noted, with Immigration Minister Alec Hawke working on finalizing the visa system and its conditions.

But Abul Rizvi, a former deputy secretary of the Immigration Department, has warned that under the new scheme, "farmers, unscrupulous labor-hire companies and dodgy agents will now have full access to farmworkers they can exploit without relying on the more restrictive Pacific Island seasonal worker visa, working holidaymakers or asylum-seekers, including unsuccessful asylum-seekers."

He added that the proposal would take Australia toward "a society that accepts some 'lesser' humans -- usually people of color -- that are needed to do the jobs we will not."

According to Lowy Institute Pacific program director Jonathan Pryke, the ASEAN visa scheme would undermine the Pacific seasonal workers program, which has brought some 40,000 workers into Australia since 2012 and provided some AU$200 million in remittances for their families back home.

These workers stay six times longer on farms than backpackers and are 20% more productive, according to the think tank's research. In addition to those already in Australia, some 27,000 other Pacific Islanders have been screened and are ready to work, one area of soft power where China cannot compete.

With Australia's farm lobby complaining about the costs involved in hiring the Pacific Islanders, it seems obvious that the new ASEAN visa program is about creating a more compliant and fearful workforce that is much less able to complain than well-educated backpackers.

The proposed scheme takes Australia back toward the 19th century where white settlers had indentured Pacific Islander "Kanakas" cutting their sugar cane, gangs of Chinese coolies clearing bushland, and other Asians diving for pearls.

Morrison should let this bad idea lapse before it generates negative stories that will far outweigh any significant economic benefit to Southeast Asia.