Bank of Japan going green is an economic game changer The BOJ headquarters, pictured in November 2019: the central bank could mull the mechanics of green-centric quantitative easing.   © Getty Images
CopyCopied

The Bank of Japan is turning heads as it joins peers in adding melting glaciers and environmental wokeness to the list of reasons to cut interest rates.

To monetary purists, combating climate change is central bank mission creep run amok -- this can only end badly. To others, it is wise recognition that rising temperatures and sea levels might soon erode growth and financial stability as much as anything else.

Does that make BOJ Gov. Haruhiko Kuroda the central banker best positioned to set the debate?

Later this month, Kuroda is likely to detail inducements that would channel lending toward greener pursuits. The goal would be to prod the private sector toward greater investments in sustainability. A shove, really, to incentivize companies to do more of the heavy lifting needed to move Asia's No. 2 economy toward a carbon-neutral future. The centerpiece may be offering banks slightly higher interest rates for green lending.

Admittedly, the BOJ is playing catch-up. In May, the Bank of England unveiled shifts in asset purchases toward companies reducing carbon footprints. The European Central Bank is making similar noises. In Asia, the People's Bank of China and the Monetary Authority of Singapore are already working to create green finance ecosystems.

Yet the Kuroda BOJ could be a game changer in two ways.

First, going green lets Kuroda make good on the excitement many felt when then-Prime Minister Shinzo Abe hired him in 2013. Second, it could shift the focus toward the renewable energy revolution Japan needs to maintain its economic standing in Asia.

When Abe announced Kuroda's appointment, it was not only his pedigree as a top Ministry of Finance official that impressed. It was the eight years he had just spent in Manila running the sprawling Asian Development Bank.

During his 2005-2013 stint in the Philippine capital, I would often drop by his office for a reality check on the ADB's poverty reduction efforts in 49 Asia-Pacific economies.

But since Abe brought Kuroda home, he has mostly stayed conventional. He supersized the BOJ's balance sheet, pouring unprecedented liquidity into debt and equities via exchange-traded funds. Largely, though, Kuroda's tenure has been big on bazooka blasts to reflate the economy but short on moves to import the more experimental approach he learned in Manila. 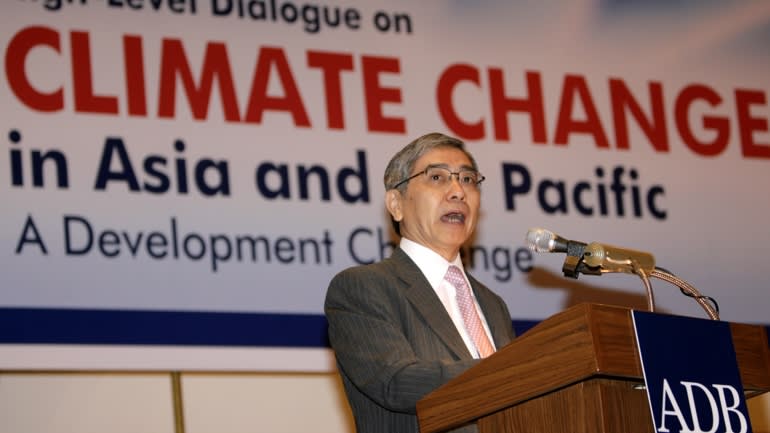 Haruhiko Kuroda talks during the high-level dialogue on climate change at the ADB headquarters in June 2009: his tenure as BOJ governor has been short on moves to import the more experimental approach he learned in Manila.   © Reuters

Going green is a unique opportunity for the BOJ to do just that. And to put Prime Minister Yoshihide Suga's government well on the road to reaching net-zero emissions by 2050. BOJ policy innovation could even get Tokyo there much sooner by 2030, perhaps.

Granted, Suga has been rather busy battling COVID-19 and keeping the Tokyo Olympics alive. Why not broaden the BOJ's mandate so it can accelerate the transition away from coal, oil and other fossil fuels? This means prioritizing innovation in batteries, solar, wind and geothermal power sources.

The politics are messy indeed. For one thing, BOJ headquarters is not swimming with the environmental equivalent of taxonomy experts to decide which bonds or ETFs deserve green status. For another, the nuclear-power empire is sure to strike back. Monetary purists, meantime, might worry Kuroda & Co. will forget their 2% inflation target.

Yet the end may justify the means. As 2001-2006 Prime Minister Junichiro Koizumi -- father of Suga's environment minister, Shinjiro Koizumi -- has been arguing, the greatest opportunity in decades is Japan's for the taking: inventing and commercializing ways to grow sustainably.

Right in Japan's backyard -- in China, India and Indonesia -- are nearly 3 billion people who risk choking on rapid gross domestic product. And whose governments would pay handsomely to balance 5% growth with cleaner skies and rivers and better public health trajectories? Who better than Japan Inc. to fill the void with -- and profit from -- new clean-growth technologies?

Sure, China is raising its innovative game. President Xi Jinping's Made in China 2025 extravaganza, though, appears to be getting sidetracked by semiconductor shortages. Beijing also seems to be waging war on China's biggest tech disrupters. This augurs poorly for domestic energy innovation.

Kuroda's team could help Japan fill this void. Talk is that the BOJ may offer banks an added interest of, say, 0.1% or 0.2% to make green loans and focus on sustainable debt issuance. Why not up the incentive to 0.5%, 1% or even more in some cases?

The BOJ could work with lawmakers to expand collateral rules on lending facilities to prioritize green assets. It could shift asset purchasing programs away from brown industries heavy on fossil-fuel use. It could mull the mechanics of green-centric quantitative easing. These actions could, in turn, inspire a bigger and edgier venture capital movement in Japan.

Since 2013, Tokyo has thrown trillions of dollars of fiscal stimulus at the economy. The BOJ grew its balance sheet beyond the size of the entire $5 trillion economy. And yet deflationary pressures persist. All along, Kuroda insisted the BOJ has the power to reflate Japan once and for all. Going green could do that and much more for an economy ripe for a bold reboot.