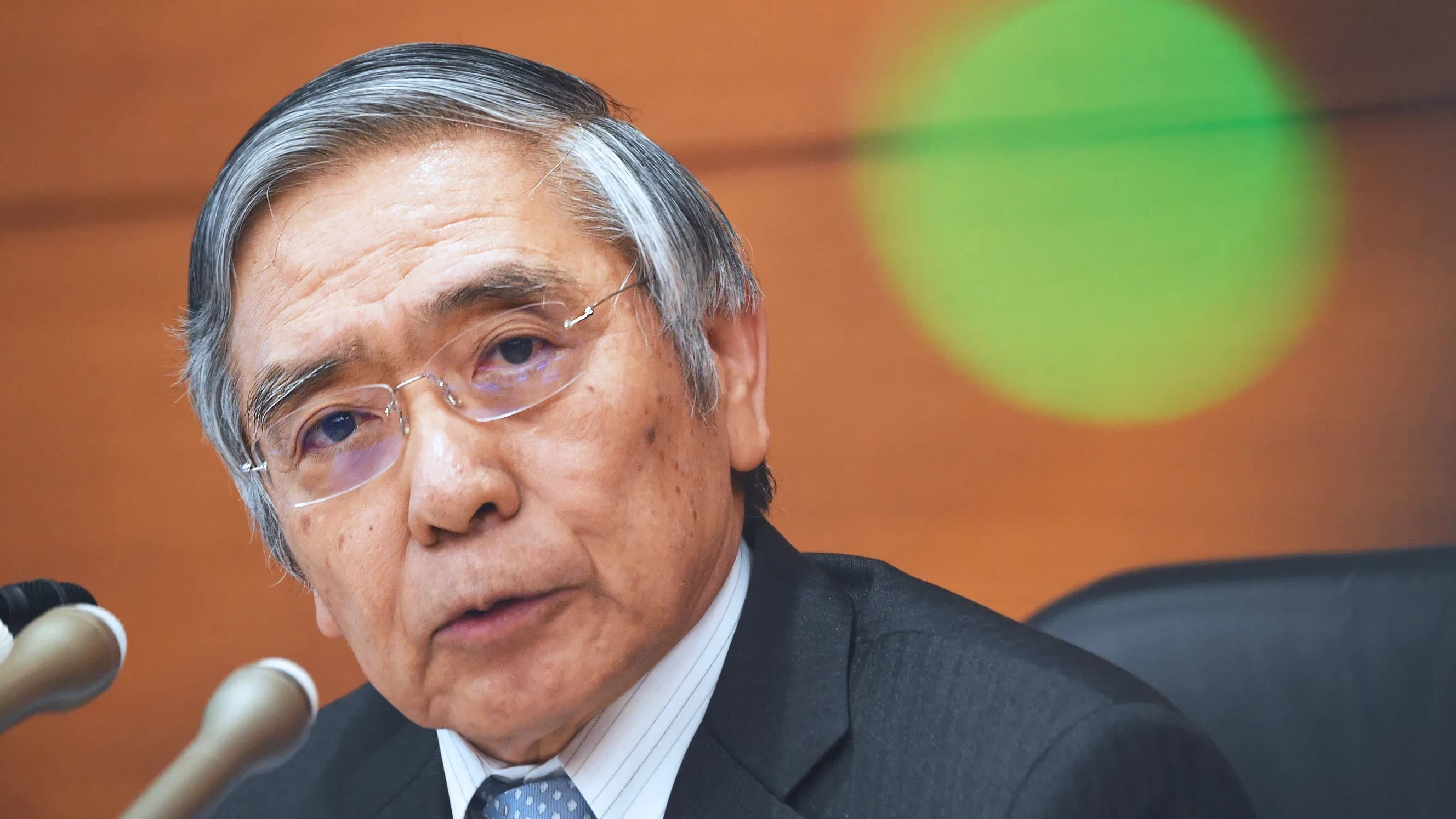 In standing still and not cutting interest rates last week, the Bank of Japan sent a message to markets: you are on your own. The memo, though, was really intended for Prime Minister Shinzo Abe.

BOJ Governor Haruhiko Kuroda's inaction effectively confirmed that the BOJ's "bazooka" -- its powerful jolts of monetary stimulus -- is out of ammunition in the conventional sense. He has already cornered the government bond market, boosted stocks through exchange-traded fund purchases and driven the yen down by as much as 30%.

Kuroda could have easily pulled off another unconventional Halloween surprise, however. On the last day of October 2014, he shocked markets with a fresh liquidity blast. Its message: we are in control as signs grow that demand is softening.

Not this time, Kuroda decided. It is understandable that he wants Abe to get busy with upgrades to loosen labor markets, reduce bureaucracy and empower women in order to generate the big wage gains needed to reinvigorate an aging, uncompetitive nation.

But Kuroda forgot that central banking is largely an expectations game. Those perceptions require fresh reminders that the BOJ is on the job.

Kuroda "always knew his bazooka on its own cannot revive Japan and he is probably frustrated that Abe and Japan Inc. have not used his covering fire to enact significant structural reforms," says Jeff Kingston of Temple University in Tokyo.

"He created opportunities that have been squandered and much of his power draws on the psychology of the markets. The awe he once commanded is gone and it seems Abe missed the boat."

Kuroda could recreate some of that awe with the smallest of gestures. A move to purchase asset-backed and mortgage-backed securities would cheer markets. So might a plan to dabble in local government debt, pumping liquidity into rural communities on the front lines of a shrinking population. How about rewarding CEOs, via corporate debt purchases, sharing profits with workers or promoting women to top management roles?

The bar really is so low. Even a vague comment that the BOJ is watching the yen's upward trajectory versus the dollar would pay dividends for exporters. Or a mention that the Federal Reserve's three cuts this year may warrant a BOJ response. Or a move to recalibrate the focus of government debt purchases, perhaps buying more long-term IOUs, fewer medium-term ones.

It would not cost Kuroda much. Instead, he offered an underwhelming pledge to perhaps, maybe, consider acting at some maddeningly vague point down the road. This makes the BOJ look clueless, at best, or just derelict.

Japan's road to 2020 is littered with impediments. U.S. President Donald Trump's tariffs are upending Asian supply chains. Trump at any moment might devalue the dollar, or go ahead with a threatened 25% tax on imports of cars and parts. Trump at any moment might devalue the dollar.   © Reuters

As China slows, Kuroda's economy faces another headwind from its neighborhood: falling exports to thanks to Tokyo's tit-for-tat with Seoul. When sales of Japanese beer to Asia's number-four economy plunge 99.9% in September from a year ago, the region has serious problems.

The Bank of Korea is among Asian monetary authorities scrambling to ease as global risks increase. Officials in India, Indonesia, Malaysia, the Philippines and Thailand have eased. Australia and New Zealand, too.

Granted, the BOJ did exponentially more to boost demand than peers -- but then none of them are nursing wounds from 20-plus years of deflation and wealth destruction. None of them saw their population shrink by a record number in 2018 as government's debt swelled toward 250% of gross domestic product.

At the end of last year, the BOJ's balance sheet exceeded annual GDP, a first for a G-7 nation. With a benchmark rate target of minus 0.1% -- and a negative 10-year bond yield -- there is little room to roam, conventionally speaking.

Even so, this is no time to be caught napping. Put together the Trumpian chaos in Washington, the Brexit mess in Europe and China's slowdown and you have a perfect recipe for a rough 2020.

In the U.S., the talk is of when Fed Chairman Jerome Powell might ease again. In Frankfurt, it is about how new European Central Bank head Christine Lagarde might expand on Mario Draghi's easy-money policies. And in Tokyo it is that nobody is home at BOJ headquarters as global risks mount.

It is not a good look for a central bank that once worked hard to change the narrative on Japan -- and is now being taken for granted.