Bank of Japan should not fear Donald Trump's Twitter wrath

The economy could take fiscal easing, no matter what the US president thinks BOJ Governor Haruhiko Kuroda attends a news conference on July 30: BOJ inaction sends a counterproductive signal that his team is out of ammunition.   © Reuters
CopyCopied

Economists are reaching deep into their files of excuses to explain why the Bank of Japan did not cut interest rates this week. Growth is still positive, some argue. Others say Governor Haruhiko Kuroda was reluctant to ease ahead of the Federal Reserve. More than a few pundits wonder if the BOJ is simply out of options.

But there is another pretext worth considering: the @realDonaldTrump Twitter feed.

Granted, few expected Kuroda and company to act boldly on July 30. Justifications for inaction, though, fall away when you consider how the BOJ trimmed projections for growth and inflation -- to 0.7% and 1% this fiscal year, respectively.

So when Kuroda said he was "more positive" about easing should U.S. President Donald Trump's global trade war dampen prospects, it is fair to wonder what he is waiting for.

Could it be America's tweeter-in-chief? Kuroda does not use social media. But the recent experience of his European counterpart helps explain how Trump's itchy Twitter fingers may be cowing Kuroda's team into not adding fresh stimulus.

Trump complained immediately in a tweet that Draghi was "making it unfairly easier" for Europe "to compete against the USA. They have been getting away with this for years, along with China and others."

Japan is anxious to avoid being lumped among these "others." Already its export engine is getting hit by tariffs, and Prime Minister Shinzo Abe's trade negotiators are preparing to face off with the "America First" president.

Any action that markedly weakens the yen could provoke a Trumpian response, or perhaps even increase his resolve to make Tokyo pay when bilateral trade talks gain momentum. This fear also could explain Finance Minister Taro Aso's eerie silence over the yen's more than 5% rise versus the dollar since October. Normally, Aso's team would be jawboning markets, warning traders against pushing the yen lower.

The BOJ pulling punches is the latest example of how Abe's big bet on Trump is backfiring. No world leader embraced this chaotic U.S. presidency more enthusiastically. Since his sprint to Trump Tower in November 2016, nine days after Trump's shock election, Abe has closely aligned his priorities with this White House.

Count the ways that bet has gone awry. Trump reneged on the Trans-Pacific Partnership, a trade deal which Abe spent considerable political capital joining. Trump declined to give Tokyo a pass on taxes of 25% on steel and 10% on aluminum. And Japan is the biggest collateral-damage victim of Trump's 25% levies on $250 billion of Chinese goods.

The 6.7% decline in Japanese exports year-on-year in June was the seventh straight monthly drop. Manufacturing confidence is at a three-year low. Such stats would have a pre-Trump BOJ and Ministry of Finance talking down the yen. The same goes for factory output tumbling 3.6% in June, a telltale sign of trouble for the all-important auto sector. 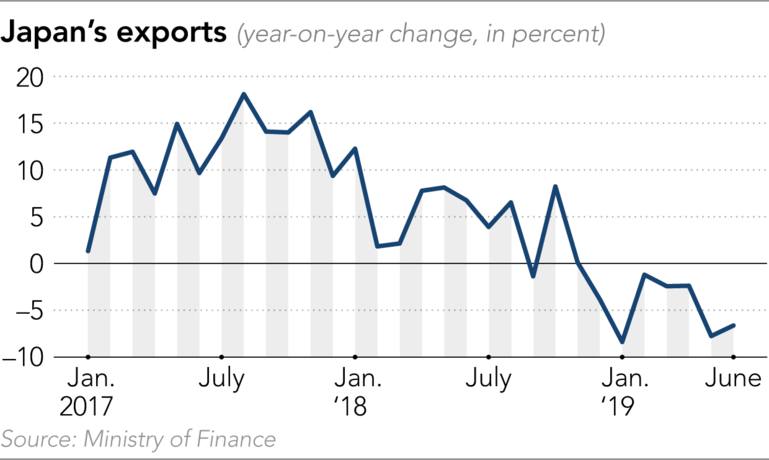 Trump's foreign policies, meantime, are making Tokyo less safe. As the U.S. leader professes "love" for Kim Jong Un, North Korea's leader is firing more and more short-range missiles into the seas around Japan, as he did again on Wednesday. Trump does not care, so long as Kim is not perfecting weapons capable of reaching American cities.

Yet Abe's economic legacy may be the biggest casualty, in Trump-adjusted terms. In fairness, his team needs to look in the mirror as growth grinds toward a halt. If the government had worked harder since 2012 to reduce Japan's reliance on exports, rekindle innovation and reduce bureaucracy, Japan might be standing its ground even as tariffs knock China off balance.

Instead, Abe bet it all on Kurodanomics. And since taking the reins at BOJ in March 2013, Kuroda has largely delivered. At the time, Abe characterized the epic monetary easing Kuroda unleashed as phase one of a broader reflationary effort. It never really arrived, though. The effects of phase two, fiscal loosening, got lost in a 2014 sales tax hike.

The most vital step, structural reform, took a back seat to BOJ liquidity. After a few modest moves to tighten corporate governance and increase the female workforce, Abe outsourced change to Kuroda's team.

The BOJ hoarded half of outstanding government bonds, gorged on stocks via exchange-traded funds and drove the yen sharply lower. By the end of 2018, its balance sheet topped the size of the entire $4.9 trillion economy.

Understandably, Kuroda is reluctant to push further into the monetary unknown. Negative bond yields seemed to do more to hurt bank profits than stimulate credit creation. It is high time, though, that Abe got serious about loosening labor markets, catalyzing a startup boom and using tax incentives to prod companies to fatten paychecks and hone competitiveness.

BOJ inaction sends a counterproductive signal that his team is out of ammunition. Monetary policy is often very much a confidence game. Kuroda telling households, CEOs and investors that conditions are better than the reality reduces the BOJ's influence at the very worst moment.

Even making a symbolic switch in asset-purchase priorities -- perhaps redoubling efforts to buy government debt with maturities of ten years and longer -- might have enlivened sentiment as the economic trajectory worsens. The BOJ passed on major new tweaks.

Things are likely to get worse. Trump has lots of explaining to do as his much-advertised China trade deal unravels. As the 2020 election battle heats up, he is desperate for a win on the world stage -- and that means Abe's Japan. If Trump believes Abe is not bowing sufficiently to his will, the president is sure to lash out on @realDonaldTrump early and often.

Precedents abound. In January 2017, just before taking office, Trump sent shivers through Japan Inc by threatening a "big border tax" on Toyota. Since then, Trump has also tweeted that Japan is guilty of "global freeloading" via a weak yen. Trump's current assault on the Fed suggests he is still obsessing over a dollar exchange rate he views as too strong.

The BOJ's wherewithal to keep Japan on track is limited without help from Abe's government. But pulling monetary punches, be it out of fear of Trump or the unknown, is not a winning strategy. Odds are, the BOJ will be easing again in the months ahead. Excuses for delay are running as thin as Trump's skin.