Twitter needs to do more to reduce disinformation beyond advertising.   © Reuters

In April 2016, seven months before the U.S. elected Donald Trump as president, Mark Zuckerberg told an audience of Facebook developers that his company was "building the technology to give everyone the power to share anything they want with anyone else."

This was vintage Zuckerberg: optimistic, naive, sheltered in Harvard-graduate, Silicon-Valley privilege, with a belief that connecting everyone, no matter who they were or what they were saying, would inherently be good for the world.

Of course, the business model was somewhat different. Facebook was building the technology to give paying customers the power to target specific consumers and constituencies with, largely, whatever product or message they chose. Facebook's advertising revenue grew from $4 billion in 2012 to $55 billion in 2018.

The effects of political advertising are visible everywhere from the U.S. to the Philippines, but the real problem is not such advertising by itself. Rather, it is the precision with which tech companies allow politicians, their allies and their secret surrogates to target voters. Combined with a belligerent, untrustworthy digital culture, social media are damaging democracy.

In Indonesia, the trend began in the Jakarta governor election of 2017. Once heralded as Twitter's capital city in terms of most posted tweets, Jakartan political campaigners used social media company data to locate constituents and appeal to their identities as Muslims through ads.

Mass rallies of Muslims flooded the streets of the capital on numerous occasions, and the incumbent governor, a Chinese-Christian, was ousted and ultimately jailed for blasphemy. Social media discourse, and the ability of campaigners to target Muslim voters on their pages, was not the sole cause of this election campaign and its result, but it undoubtedly played a role. 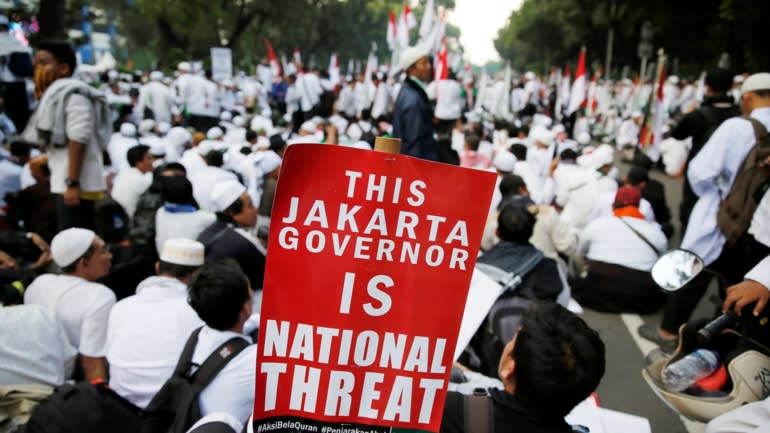 Members of Muslim groups attend a protest against incumbent governor in Jakarta in November 2016: mass rallies of Muslims flooded the streets on numerous occasions.   © Reuters

The 2019 Indonesian presidential election saw similar tactics where it grew common for politicians to hire social media campaigners to produce disinformation about their opponent.

The ability of tech companies to microtarget customers, including by ethnic or religious group, is why they are valued so highly, not just for present purposes but future gains as their algorithms become more advanced at locating -- geographically and sociopolitically -- and selling to specific people and groups.

In light of these worrying trends, in late October Twitter banned political advertising on its platform, and received a lot of good publicity for doing so, given that Facebook has chosen not to. But Twitter needs to do more to reduce disinformation even beyond advertising, especially the manipulation of content through paid troll armies in Southeast Asia and elsewhere.

Keyboard warriors have been a growing feature of the region for more than six years, starting with the cybertroopers of Malaysia's 2013 election. Philippine trolls and prominent Indonesian buzzers are part of Twitter's polarized and belligerent discourse, driven by political campaign teams.

Rodrigo Duterte won the Philippines presidency in 2016 without significant mainstream media spending on ads. His campaign chief, Nic Gabunada, ran a campaign largely through social media, which turned out to be hugely successful.

Throughout his presidency, Duterte's social media operations have expanded and his popularity has grown, while concurrently the country's democratic quality has rapidly declined.

Earlier this year, Facebook shut down Gabunada's pages for "inauthentic behavior," but the trend had been set. Disinformation campaigns on social media were prevalent nationwide in the Philippines 2019 midterms, from local district chiefs and mayors to senatorial campaigns.

Tech companies will say their growth is central to the emerging digital economy: it will create jobs and therefore provide more potential for innovation and therefore more growth. This argument, along with claiming to be advocates of free speech, convinces most politicians to avoid regulating them.

In Southeast Asia, tech companies and their founders are seen as saviors from a future economic downturn and market instability. Indonesia's richest digital entrepreneur, Nadiem Makarim, was recently appointed as minister for education.

Do we want our apps -- social networks, transport, dating, news, weather and more -- to use the information they gather, especially where we go and who we connect with, to sell us a product, including the product of a political campaign?

We need clearer and enforced regulation on what tech companies can do with our data and to what extent they can sell it to advertisers, which include but are not limited to politicians and political parties.

It is no longer enough for tech companies, or other global behemoths, to espouse the virtues of economic growth, or to nonchalantly respond, as Zuckerberg did to questioning from U.S. Congresswoman Alexandria Ocasio-Cortez, "I think lying is bad," while leaving these problems to everyone else. Ross Tapsell is a senior lecturer at the Australian National University's College of Asia and the Pacific, and currently a visiting fellow at the ISEAS Yusof-Ishak Institute in Singapore. He is author of "Media Power in Indonesia" (2017) and co-editor of "Digital Indonesia: Connectivity and Divergence" (2017).