Rush to cement legacy may yield dangerous giveaways for Pyongyang 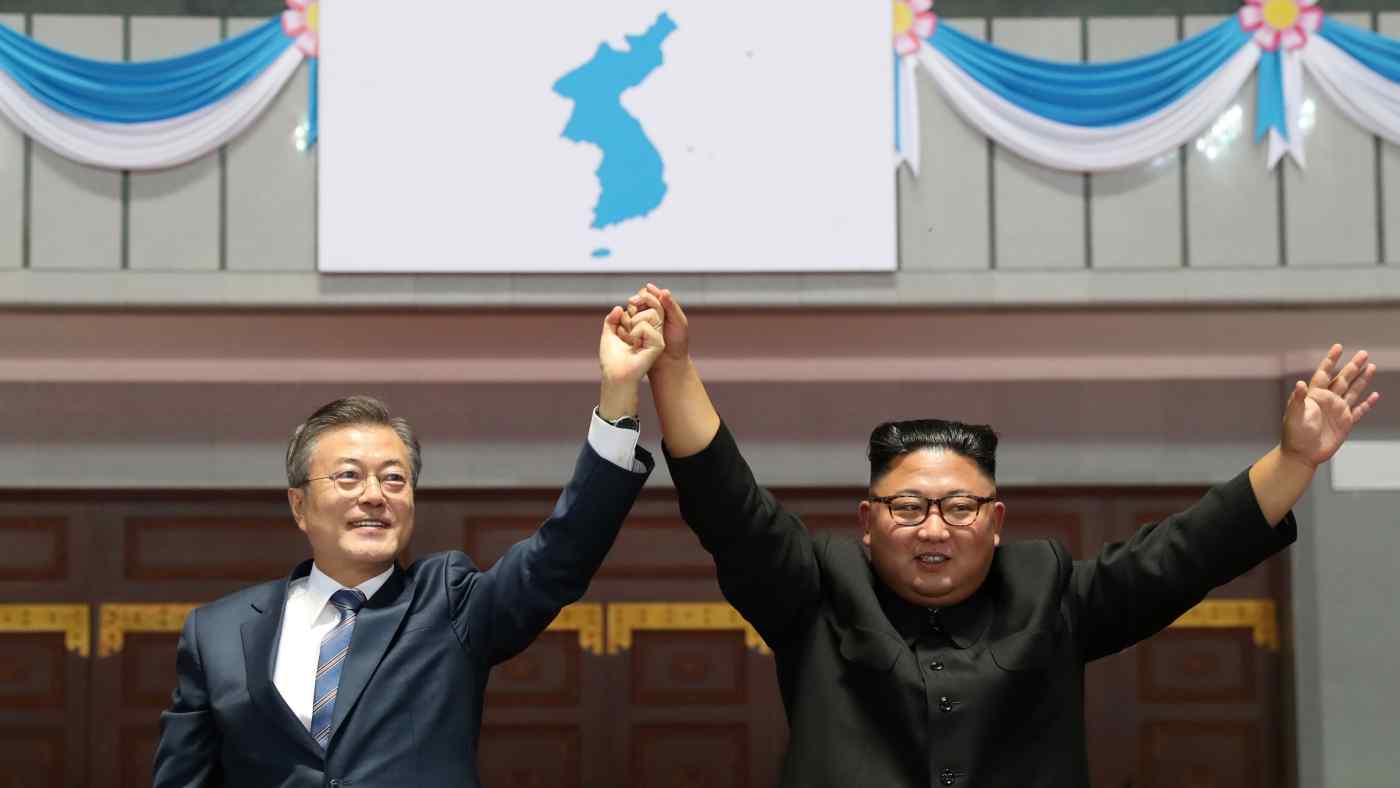 Moon Jae-in and Kim Jong Un acknowledges the audience after watching a performance in Pyongyang in September 2018: Moon has failed to give North Korea concessions so significant that a potential conservative successor cannot undo them.   © Reuters
CopyCopied

Anthony W. Holmes was special adviser for North Korea in the U.S. Office of the Secretary of Defense from 2017 to 2021 and is the principal at Holmes-Asia.

South Korean President Moon Jae-in will leave office in 2022 having not fulfilled his goal, stated in 2017 at the very beginning of his administration, to achieve permanent peace with North Korea.

While that language may sound like traditional boilerplate talking points, for Moon it means something more serious: He has failed to give North Korea concessions so significant that a potential conservative successor cannot undo them.

The South Korean right and left view their security situation quite differently from one another. As I wrote in the column "The futile pursuit of North Korea's 'golden concession'" published in Nikkei Asia on Feb. 15, the South Korean left puts almost none of the onus on the North to demonstrate good faith in negotiations.

It is invariably the world's responsibility to demonstrate peaceful intent with unilateral upfront "golden concessions." This leaves the South's academic and bureaucratic class continuously churning to come up with new and "better" ideas.

Moon entered office halfway through my first year as special adviser on North Korea to the U.S. secretary of defense after his conservative predecessor, Park Geun-hye, was impeached and removed from office. Under Park, Washington and South Korea shared similar concerns about North Korea's weapons development, actions and tactical unpredictability.

Moon's administration, however, quickly shifted the conversation to appeasing North Korea. They did not call it that, of course, but rather came to meetings with a wish list of unilateral giveaways for Pyongyang. I was ambushed with proposals to repair and rebuild North Korea's railways, roads and bridges; build a heavy machinery factory in North Korea; unilaterally convert the Demilitarized Zone into a "peace park" and UNESCO World Heritage site; disestablish the United Nations Command, etc.

Some domestic policy changes, such as relaxing reporting requirements for unofficial contact with North Korea and proposals to let local governments handle family reunions inside North Korea, were clearly designed, in my assessment, to make sanctions monitoring and enforcement more difficult.

One time it approached farce. A day or so after North Korea tested its first ICBM, on July 4, 2017, a launch that overflew Japan and was met with raucous anti-American celebrations and threats in Pyongyang, South Korea's first instinct was to probe us on whether we would support an amendment to a United Nations Security Council resolution under negotiation to lift sanctions on North Korea, particularly the Kaesong Industrial Complex, or KIC.

The U.S. government was negotiating this resolution to keep America and our allies safe from North Korean threats, but Seoul wanted to make sure North Korea could earn hard currency in U.S. dollars. That money would inevitably have gone to the weapons program.

The KIC was another of those wide-eyed grand gestures from South Korea where its companies would open factories using North Korean "labor." Its proponents claimed North Korea would become dependent on outside money and would therefore moderate its legendary bellicose behavior. Win-win.

Instead, North Korea closed it and stole the South Korean equipment in 2016 after South Korea responded to North Korea's hydrogen bomb and ballistic missile tests. A South Korean security guard stands on an empty road to the Kaesong Industrial Complex at the South's customs in Paju in February 2016: North Korea closed KIC and stole the South Korean equipment.   © Reuters

The Moon administration later built an inter-Korean liaison office there in 2018, which North Korea dramatically exploded to make a point about how little it cared about relations with the South. This was at the same time that North Korea demanded South Korea stop defectors and human rights groups from sending balloons loaded with medicine, outside information and food into North Korea and arrest prominent defectors. As you may remember, Seoul dutifully complied.

South Korea's quest to reopen KIC or resume other projects to benefit the North became so common you could set your watch by them. Some of my colleagues would bet on how long we would get into a meeting with our South Korean administration counterparts before they proposed some sanctions-violating one-sided gift that was sure to bring about everlasting peace.

I raise these examples now because I strongly suspect that with less than a year left in Moon's term, the Ministry of Unification is working overtime to generate any and all concessions it can to offer North Korea. I suspect the call from the presidential Blue House is "go big or go home." We are in the legacy-building phase of a presidential administration after all.

Having real negotiations with North Korea requires strong South Korean relations with the United States and Japan to show a united front.

Unfortunately, playing the anti-Japan card near a South Korean election is frustratingly effective. I suspect the final months of Moon's administration will see another breakdown in Japan-Korea relations because Moon has little incentive to maintain the facade of comity with Tokyo that the realities of geography and governance require. It is also a cynical electioneering tool, because the South Korean left likes to portray its conservative political opponents as no different than Japanese collaborators during the occupation.

If Seoul was willing to ask the U.S. to relieve sanctions on North Korea while Pyongyang was actively testing new classes of long-range missiles, or to reopen a hard-currency-generating factory complex while North Korea was brazenly violating the inter-Korean comprehensive military agreement, imagine what proposals it will come up with in Moon's final months, when his legacy and commitment to electing a policy-friendly successor are on the line.