Technology has to integrate with health services and protect civil liberties TraceTogether has released no information about how many cases it has identified. (Photo by Mayuko Tani)
CopyCopied

As countries begin to relax social distancing rules over the coming weeks, political leaders are desperately seeking ways to bring some kind of normality back to economies battered by COVID-19. Optimists think a new generation of contact tracing apps might help to manage future outbreaks, reducing the need for damaging new lockdowns.

Such hopes are understandable. Yet the idea that a new generation of apps might act as a key to future reopening is almost certainly overdone.

Hopes for digital contact tracing took off on March 21, when Singapore's government launched its TraceTogether app. Once installed, the program uses Bluetooth to scan nearby phones, keeping a record of devices that also have the app running.

If a TraceTogether user contracts COVID-19, they can then choose to send their records to Singapore's health ministry. If they do, their information will be made available to contact tracing teams, adding an extra layer of data to supplement in-depth interviews with patients about their whereabouts before infection, as well as sources like CCTV and credit card records. This in theory then allows the government to warn other people who might have been in contact with the infected person in situations that only the app is likely to know about, for instance on public transport or sitting in a cafe.

Dozens of similar schemes are now under development globally. Perhaps the most significant came on April 11, when Apple and Google said they would codevelop a decentralized system to underpin other apps built on their iOS and Android operating systems.

All this sounds welcome given the growing realization that many countries will have to manage repeated COVID-19 outbreaks until a vaccine is developed.

Singapore's case is instructive here, given the city-state is now battling its third wave of infections. The initial two, which came via China and workers returning from abroad respectively, were handled effectively. The third, involving outbreaks in migrant worker dormitories, has been more problematic, pushing the island's confirmed cases over 6,500. 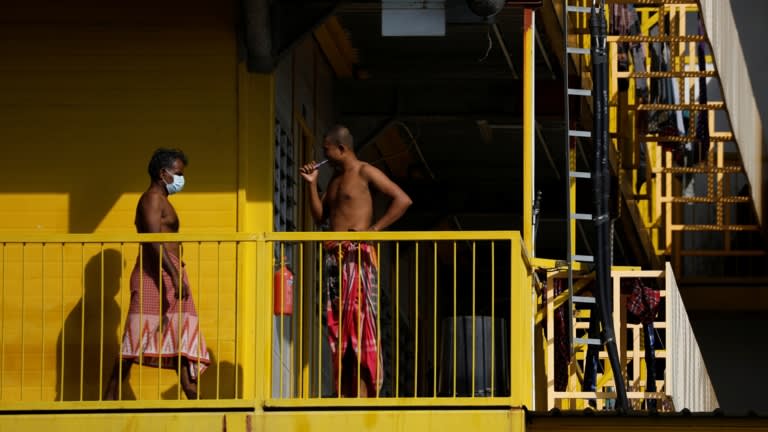 Migrant workers stand outside their rooms at a dormitory declared as an isolation area in Singapore on Apr. 21: the city-state is battling its third wave of infections.   © Reuters

"COVID-19 will be with us for many more months, and likely beyond the end of the year," as Lawrence Wong, co-chair of Singapore's government COVID-19 task force, put it on April 17. "We have to be prepared for future waves of infection and we have to steel ourselves for a long fight."

Large-scale new contact tracing systems are clearly one vital front in that battle, although thus far there is scant evidence to show how well the apps themselves actually work.

TraceTogether has released no information about how many cases it has identified. Similar apps are likely to generate many false-positives, for instance by scanning Bluetooth connections through the walls of neighbors who have not been in contact. There is a risk of abuse too, as pointed out by Ross Anderson, a security expert at the University of Cambridge.

"The performance art people will tie a phone to a dog and let it run around the park," Anderson wrote recently. "The Russians will use the app to run service-denial attacks and spread panic; and little Johnny will self-report symptoms to get the whole school sent home."

Three further problems are then likely, the first being the need for mass adoption. Singapore's app now covers a fifth of the population. But developers think something closer to four-fifths is needed for similar apps to be truly effective.

Apple and Google's work, which is due to be unveiled by mid-May, is attractive precisely because of its potential scale, given the duo run software on almost all of the world's smartphones. Plenty of other apps have also proved popular during the crisis, such as South Korea's Corona Map, which provides data about local outbreaks. But none have reached anything like the kind of scale that contact tracing apps probably require.

This leaves public authorities facing a second dilemma of how to balance civil liberties and utility. If these apps are proven to work there is a reasonable case to make them compulsory for a temporary period, just as many parents are obliged to vaccinate children. Mandatory apps have already been used to manage home quarantine orders in countries like Hong Kong and South Korea.

Yet this thought alarms many in Western countries in particular, hence the more distributed approach taken by Apple and Google, which has been designed with strong privacy protection. Their system would not share data with public authorities, limiting itself to informing individual users and hoping they would act on that advice.

This merely introduces a third challenge of integration with public health systems. Here Singapore's relatively centralized model works better. But the approach taken by Apple and Google could potentially end up giving data to millions of citizens in ways that are effectively invisible to health authorities, complicating attempts to manage the disease's spread.

Some of these problems should be solvable, meaning apps of this sort could end up becoming one helpful tool among many in the wider pandemic battle. Much more important, however, will be building up the infrastructure of pandemic management, from hiring small armies of human contact tracers to creating mass testing regimes to target millions of citizens. Any user knows that apps can be a terrible distraction. This time they cannot afford to be.

This article has been updated to correct the working of TraceTogether.