Faced with slackening export growth, governments must recommit to multilateralism

As optimism wanes over the prospects of China and the U.S. soon reaching a comprehensive deal to address the many economic disputes between them, stresses in global trade links are coming into focus.

Then there is the weakening of consumer and business sentiment, which is dampening cyclically sensitive economic drivers such as consumer demand for durable goods and business investment in physical capital. The ongoing trade tensions and other geopolitical uncertainties are also prompting a reevaluation of the structures of international supply chains.

To understand some of these trade dynamics, we draw upon the DHL Global Trade Barometer, an index based on highly disaggregated trade data for seven major economies. An index value above 50 indicates trade growth while a value below 50 denotes a contraction.

The latest update of the index shows that global trade volumes continue to expand, but at a slowing rate. The Global Trade Barometer, which relies on data for products at different stages of the supply chain, forecasts a further slowdown in trade growth in the coming months.

This would be consistent with the World Trade Organization's forecast that global trade growth will weaken over the course of the year. Similarly, the Baltic Dry Index, a trade metric based on shipping rates for dry bulk commodities, has nearly halved in value since the beginning of 2019. 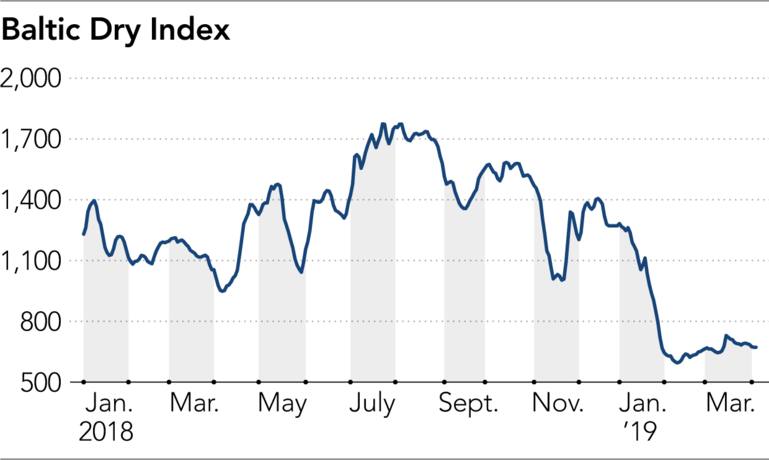 This tepid outlook is also consistent with growth dynamics of the world's major economies. The U.S. continues to maintain a decent pace of gross domestic product growth. But with signs of weakness emerging in key forward-looking indicators such as business and consumer sentiment, the Federal Reserve has already signaled a pullback from its planned trajectory of interest rate hikes.

China has maintained robust GDP growth, although indicators such as retail sales, fixed asset investment and industrial output point to a slowing of the economy's expansion. Recent monetary and fiscal stimulus measures, while modest, indicate that policymakers are concerned about slipping growth momentum. Trade data for the January-February period show that the country's exports fell about 5% and imports 3% from the same months last year, reflecting weak demand both abroad and at home.

Consistent with such macroeconomic data, the Global Trade Barometer indicates trade volumes are still expanding for most major economies, but at a rate that is weakening by the month.

While it is difficult to identify the main determinants, U.S.-China trade clashes as well as tensions between the U.S. and other major trading partners have contributed to uncertainty that is hurting business and consumer sentiment. For China in particular, the trade tensions have come at a difficult time, when domestic demand was beginning to sag.

Uncertainty in the global trading environment, along with geopolitical tensions in many parts of the world, is also affecting international supply chains.

One bellwether of these trends can be found in the data for South Korea, a key link in many international supply chains, especially for electronics and other high-end durable goods. In February, South Korean exports and imports fell 11% and 13%, respectively.

The Global Trade Barometer index values for South Korea's capital goods and technology sectors are near 30, deep into contraction territory. The country's overall reading has fallen sharply over the past year and is now just below 50, signaling no growth.

Even India, the fastest-growing major economy in the world, has not been immune from trade woes. Consistent with a dip in its overall trade volume, the Global Trade Barometer index for India has plunged by about 16 points to 59 over the past three months.

The disruption in U.S.-China trade and other trading relationships has been good for some countries. Bangladesh and Vietnam have replaced China as a supplier of certain tariff-affected exports to the U.S., such as textiles. Brazil and Canada have similarly increased exports of soybeans to China, displacing U.S. exports.

Such narrow gains of a few countries come, however, at a broader cost to supply-chain efficiency. These costs are likely to compound as multilateral trade agreements give way to bilateral and regional ones and as the rules underpinning the international trading system come under attack from the Trump administration.

China, for instance, is now negotiating bilateral trade deals with many of its major trading partners as it seeks to counteract the effects of trade hostilities with the U.S. Recognizing the importance of trade to their prosperity, the countries who were to join with the U.S. in the Trans-Pacific Partnership have moved forward with a trade deal without Washington. Although such arrangements create some short-term certainty, they are a poor substitute for a more open global trading system underpinned by a reformed WTO.

The cyclical slowdown in major economies, which is affecting domestic demand, is of course part of the reason for the trade woes. But it cuts both ways: slowing trade growth could add to rising economic difficulties around the world.

The concerns also go beyond the short term. Trade tensions and the uncertainty they have spawned have the potential to leave a long-lasting scar on the world economy, particularly through their deleterious effects on business investment.

Low investment imperils future growth and could also hurt productivity. While policy measures to stoke domestic demand could temporarily reverse the slump in trade growth, the key challenge for policymakers is to recommit to multilateralism and to improving rather than tearing apart the rules that underpin the global trading system.

Eswar Prasad is a professor of trade policy at Cornell University and a senior fellow at the Brookings Institution. Ethan Wu is a student at Cornell.