Biden inherits a divided nation and a tarnished Trump legacy

Coronavirus and impeachment overhang his presidency A man and a child wear Make America Great Again caps as they wait for Donald Trump's speech in Des Moines, Iowa, in August 2016: the damage wrought over the last four years will prove hard to banish.   © Reuters
CopyCopied

On Jan. 20, 2021, for the first time since Andrew Johnson’s snub in 1869, an outgoing U.S. president did not attend the inauguration of his successor, in this case Joe Biden. Donald Trump's refusal to abide by convention is a dismal coda to a presidency blackened by the coronavirus pandemic, impeachment for an unprecedented second time and an insurrection incited by the commander in chief himself.

Biden begins his own presidency in the direst possible circumstances. More than 70 million Americans voted for Trump. A majority of Republicans still believe, erroneously, that the Democrats "stole" the election. Aged 78, a veteran former senator with great experience in foreign policy, Biden is eager to move forward. But the damage wrought over the last four years will prove hard to banish.

The American political analyst Michael Lind identifies five separate crises enveloping the U.S. A political crisis, as power concentrates among narrow elites. An identity crisis marked by the absence of a shared sense of patriotism. A social crisis, long-in-the-making, marked by the decline of community. A demographic crisis, as couples marry later and have fewer children. And an economic crisis characterized by low-paid work, chronic job insecurity and a mountain of debt. Lind, writing in The Tablet, claims we are witnessing "the slow-motion disintegration of the United States of America in its present form."

The prophets of terminal U.S. decline go back at least 50 years, starting with America's defeat in the Vietnam War. In the late 1980s, eminent Yale historian Paul Kennedy warned about imperial overstretch, only to be confounded two years later by the West's peaceful victory in the Cold War. The global financial crisis highlighted deep flaws in America's capitalist model, too. But each time, the U.S. has bounced back. Will this time be different?

Unlike Trump, Biden understands the value of working with allies in Europe and Asia. Several of the promises he has made, such as rejoining the Paris Agreement on climate change and the World Health Organization, are easily redeemable. We can expect more engagement with multilateral forums like the Group of 20, NATO and APEC. But the U.S. can only be as strong abroad as it is at home, and the picture here is bleak.

Nearly 400,000 people have died from coronavirus in the U.S. The Federal government's management of the pandemic has been disastrous, often as a result of Trump's own sabotage. Back in 1981, when Ronald Reagan was sworn into office, his White House chief of staff James Baker said his three most important challenges would be "the economy, the economy, the economy." For Biden, it will be COVID, COVID, COVID. 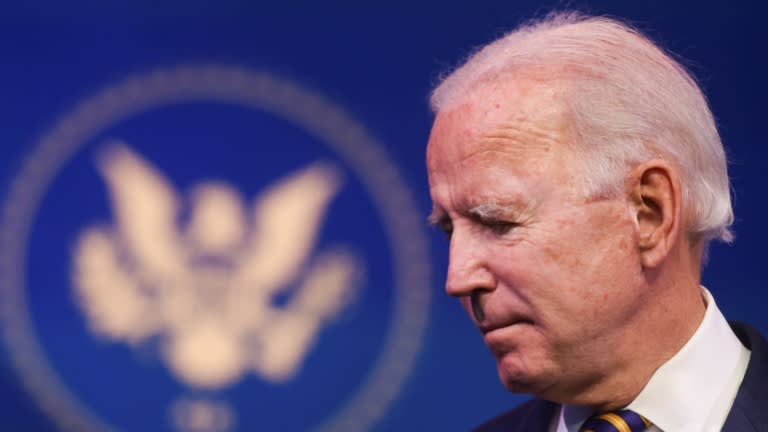 Biden is pushing another recovery package running to $1.9 trillion to help relieve unemployment and the general suffering. But he will also face heavy pressure from the left-wing of the Democratic Party for heavier public spending, particularly on entitlements and on the country's decaying infrastructure. With national debt already close to 100% of GDP and the budget deficit ballooning, some businessmen are worried about a rise in interest rates which could finish off highly leveraged companies. Another concern is a collapse in the dollar if investors turn nervous about the U.S. economy's prospects. "America has lost its vitality," says one Wall Street CEO. "It is going to take a generation to restore the foundations of its power."

This sense of weakness is striking at a time of great power competition with China. While China's advances in technology such as artificial intelligence can be overstated, the U.S. corporate sector lags in research and development spending, often diverting cash into short-term returns via share buybacks. Those pointing to latent political instability inside a repressive Chinese regime must now ask themselves whether a deeply polarized American democracy is manifestly superior. Xi's China has adapted Deng Xiaoping's old mantra: biding its time, albeit less willing to hide its strength.

Biden has cards to play. The two Senate seats the Democrats picked up in Georgia mean that he will have a Senate majority, with Vice President Kamala Harris acting as the tiebreaker. Alongside a majority in the House of Representatives, the chances of legislative deadlock are diminished. He has a seasoned team, drawn heavily from the Obama administration, including Tony Blinken as Secretary of State, Janet Yellen as Treasury Secretary and ex-career diplomat Bill Burns as head of the CIA. The one person to watch is former Secretary of State John Kerry, whose wide-ranging role on climate change could spell trouble among jealous Cabinet colleagues.

In the end, however skilled Biden turns out to be, his presidency will be determined by the health of the American body politic. Trump's populist virus still grips the Republican Party. Impeachment proceedings in the Senate will further polarize the country. Biden's election has been hailed as a restoration of normality. The greatest fear is that he turns out to be an aberration and Trumpian populism proves the new normal.