Joe Biden holds up a silicon wafer during a virtual meeting with CEOs to discuss supply chain issues at the White House on Apr. 12: redefining the word "infrastructure" is critical.   © AP
CopyCopied

Nina Xiang is the founder of China Money Network, a media platform tracking China's venture and tech sectors. She is author of "Red AI: Victories and Warnings from China's Rise in Artificial Intelligence."

U.S. President Joe Biden may not have realized it, but when he defined the tiny computer chip he was holding two months ago as the "21st-century horseshoe nail," he was echoing the logic of China's latest policy buzz phrase, "new infrastructure."

Biden's statement was also a further sign that both the U.S. and China appear to recognize that in today's information age, redefining the word "infrastructure" is critical.

Nothing underscores that better than Biden's decision to inject $50 billion into U.S. semiconductor manufacturing -- in addition to the $22 billion already earmarked for the same purpose in the separate CHIPS for America Act proposed by Congress -- as part of his $2 trillion infrastructure proposal. Borrowing from China's playbook, Biden's plan will provide tax breaks, subsidies and R&D funding to the semiconductor industry with the aim of bolstering domestic capacity.

China's competition tactics may have won the day, but the U.S. stands a much better chance of quickly increasing its semiconductor manufacturing capacity, and with relative ease.

With the U.S., China and Europe all striving to ramp up chip production, Washington can correct the exposed vulnerabilities in one of the modern world's most critical links. The U.S. will incur costs, however, by further complicating an already stressed global industrial supply chain.

Despite Biden's panicky rhetoric -- "China and the rest of the world is not waiting" -- the U.S. is the absolute leader in semiconductors by a huge margin.

U.S.-based companies have the largest share, with 47% of the global semiconductor market in 2020. U.S. semiconductor exports worth $49 billion ranked fourth-highest on the nation's list of products sold abroad last year, while America also dominates in chip design, chip design software and core intellectual property, as well as semiconductor equipment and tools.

This is not the first time the U.S. has faced a serious challenge when it comes to its lead in semiconductors. In the early 1980s, U.S.-based companies lost 19% of the world's semiconductor market share after Japanese companies achieved great successes, especially with dynamic random-access memory, or DRAM, processors.

But after the controversial 1986 U.S.-Japan semiconductor trade agreement, the jewel in the crown of American industry regained its global leadership by 1997. Biden's moves to breathe new life into the U.S. semiconductor industry, if passed, would help increase the U.S. share of global chip manufacturing capacity, which has declined from 37% in 1990 to just 12% today.

Similarly, China's whole-nation development model is likely to increase China's share as well, but at a slower pace and from a meager base. China-based integrated circuit production as a share of the global market is forecast to rise from 5.7% last year to 7.5% in 2025. The chance of success for the EU to double its chip manufacturing output to 20% of the global market by 2030 is uncertain, but Europe should be able to count on at least some expansion in capacity.

Such global diversification will reduce supply risks that have resulted from semiconductor production being concentrated in Asia, a fact highlighted by the disruptions resulting from the current global chip shortage and price hikes. Diversification will come at a cost, however, adding uncertainty on top of vulnerability that could lead to more volatile market cycles.

With the world's three biggest economic regions vying for increased market share, and racing each other to build more chip factories, we may end up with an oversupply of chip manufacturing capacity. 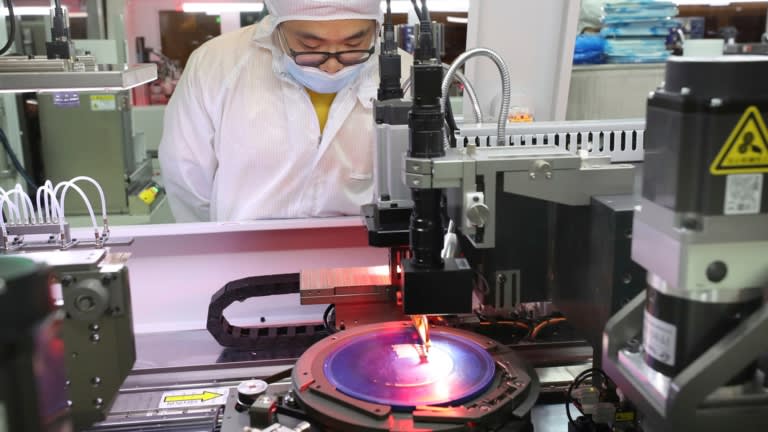 An employee works at a production line of a semiconductor manufacturer in Nantong on Mar. 17: we may end up with an oversupply of chip manufacturing capacity.   © FeatureChinaAP

The semiconductor sector is, after all, famously cyclical, with swings that often echo the economic cycle. Following the global financial crisis in 2008, global semiconductor capacity utilization fell to 68% in 2008 and then 57% in 2009, down from the industry average of around 90%. If the next economic downturn coincides with a capacity peak in around five years' time, it could be disastrous for the industry.

Building self-sufficiency when it comes to chip production supply chains will also be expensive, requiring around $1 trillion in upfront investment that could drive up chip prices by as much as 65%. Higher chip prices also mean higher end-product prices. That's the reason why car buyers suddenly have to pay more for their four-wheelers.

Perhaps most consequential is the answer to this difficult question: How will the semiconductor industry still be able to function in a world where trust has been broken?

The $50 billion Biden has proposed for new federal incentives for the U.S. chip sector is based on the idea that demand for chips in critical applications in defense, aerospace, telecom networks, energy and security should be met by domestic capacity. But what will the U.S. do if it deems other applications to be as critical?

At the same time, China is building a de-Americanized chip supply chain, placing third-party companies in the crosshairs. For industry players around the world, their operating environment just became even more complicated. All of which leads us to a future of greater unknowns.