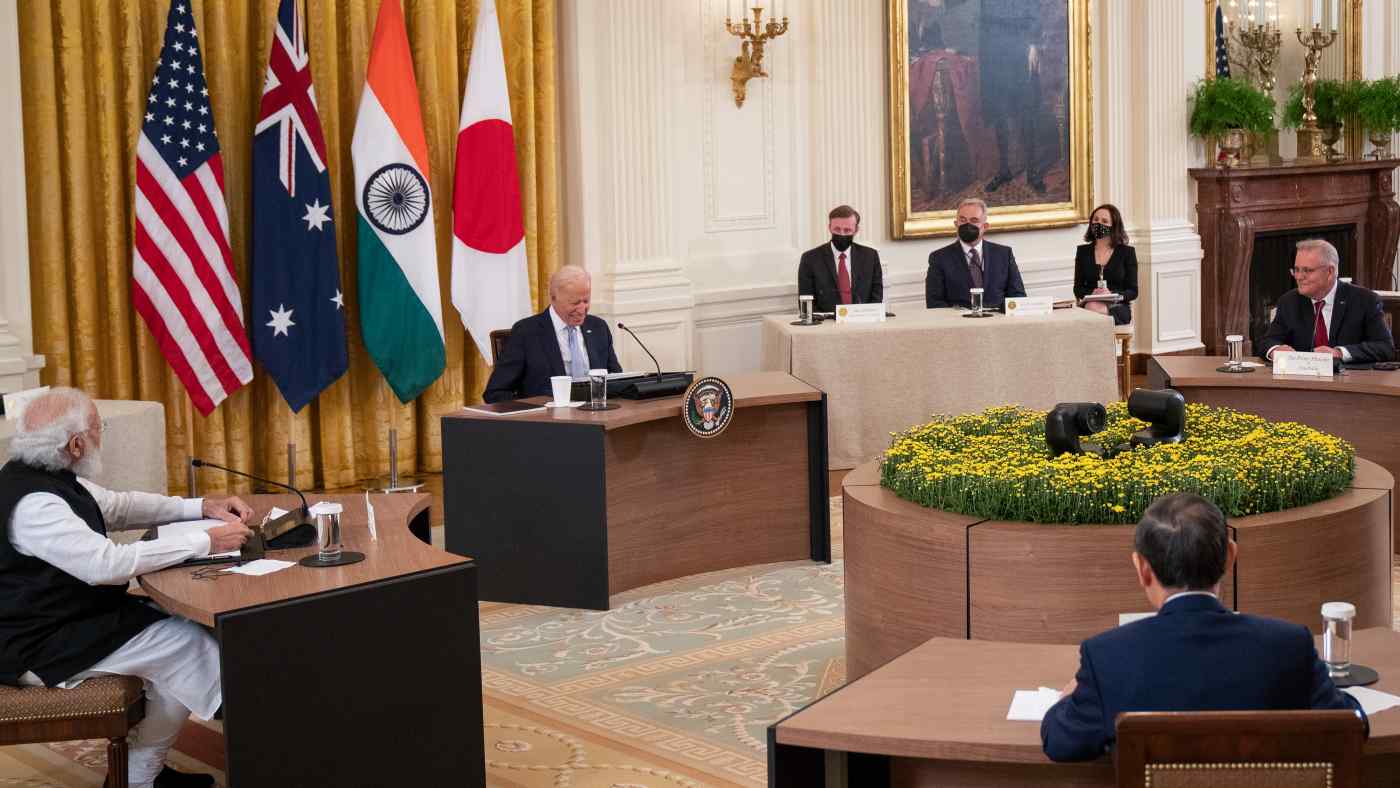 Joe Biden, second left, hosts a Quad summit at the White House on Sept. 24: the newly-launched Quad infrastructure partnership initiative was pressed ahead to preserve a free and open order in the Indo-Pacific.   © Getty Images
CopyCopied

During the inaugural in-person summit of Quadrilateral Security Dialogue, or Quad, over the weekend, the U.S., Japan, Australia and India pressed ahead with a number of initiatives to preserve a free and open order in the Indo-Pacific.

Arguably, however, one of the most important ones is the newly-launched Quad infrastructure partnership initiative. This is integral to a broader U.S.-led effort to check China's rising influence in Southeast Asia and other key regions through its flagship infrastructure program known as the Belt and Road Initiative.

The exit without strategy debacle in Afghanistan has further reinforced the urgent need for Washington to reassure its Indo-Pacific allies that they can still rely on the U.S. to anchor the liberal international order.

Infrastructure development is increasingly becoming the pivot of 21st-century geopolitics, with one authoritative study by Oxford Economics estimating that a staggering $94 trillion worth of global infrastructure spending will be required between now and 2040.

But with so few developing countries in a position to pay to cover such massive expenditure, it is no wonder that China's BRI has been so warmly welcomed since its launch less than a decade ago.

Covering some 2,600 projects across multiple continents, there is nothing quite like Beijing's BRI, which aims to create a whole new world order with Chinese characteristics. But given its size and breadth, the trillion-dollar project was bound to face difficulties and attract detractors.

Encompassing a colorful cast of corrupt despots and unscrupulous Chinese companies and other shady figures, the BRI was always going to attract its share of controversy.

Add to that Beijing's lack of transparency in its contract negotiations and the tendency to demand strategic assets, including disputed territories and precious natural resources, as collateral for its large-scale investments, and it is no wonder that the BRI has raised so many hackles.

When Donald Trump was president, Washington lambasted Beijing's infrastructure projects as nothing short of "predatory" investments. At times, top U.S. officials even pressured its allies to shun the BRI, especially in telecommunications. The U.S. also established an Indo-Pacific Transparency Initiative to expose and shed light on those aspects of Chinese investment that seemed intended to exploit.

But after Trump repeatedly failed to provide an actual alternative beyond the rhetoric, Washington's $60 billion Better Utilization of Investments Leading to Development (BUILD) initiative never took off.

Recognizing the need for action on the ground, President Joe Biden has pressed ahead with a host of multilateral initiatives such as the Blue Dot Network, a joint project with Japan and Australia, and the Build Back Better World initiative involving the Group of Seven powers.

Unlike the state-driven BRI, these are multiple-stakeholder initiatives that tap into different areas of expertise in civil society, as well as potential investors on Wall Street, Big Tech and sovereign wealth funds in emerging economies.

Biden is also doubling down on bilateral infrastructure initiatives such as the $4.5 billion joint high-tech initiative between the U.S. and Japan.

The Biden administration should also lead global efforts to tap into the $110 trillion in estimated private sector funds in the West that could facilitate reliable, long-term projects in the developing world. Later, other like-minded powers such as Australia, South Korea, Singapore and India could also pitch in.

The good news is that Beijing is showing a capacity to revisit its position in the face of this concerted pushback from its Western rivals. Back in 2015, China decided to forgo full veto powers in the newly established Asian Infrastructure Investment Bank (AIIB) in order to help win over international acceptance, especially in Europe.

When major developing countries like Malaysia openly warned of the debt trap diplomacy that came hand in hand with Chinese projects, Beijing once again recalibrated its position. During the second BRI forum in 2019, President Xi Jinping recognized the need to make Chinese investments more environmentally friendly and fiscally sustainable. Xi Jinping speaks at the closing of the BRI Forum in April 2019: the President recognized the need to make Chinese investments more environmentally friendly and fiscally sustainable.   © AP

Facing Western sanctions and external criticism, even China's national champions have also begun to sing a different tune. No less than Huawei Technologies CEO Ren Zhengfei, who has been at the center of the global fifth-generation, or 5G, telecommunications race, recently emphasized the need for China to "stay open" lest it risk "isolation."

The Chinese tycoon once called on his employees to learn from the U.S. and, at times, has even pointed to his willingness to share his company's technology with the West in order to head off collisions and enhance high-tech cooperation.

Communist China may not be a paragon of transparency and high-quality investments, but Biden's concerted efforts might prove to be just the right kind of impetus to persuade Beijing to revamp its global economic strategy, with the infrastructure-poor developing world standing to benefit the most.

After all, no less than a figure than Xi himself has publicly confessed the need to make China seem more "trustworthy, respectable and lovable" in the eyes of the world.