Biden set to restore US credibility in Asia 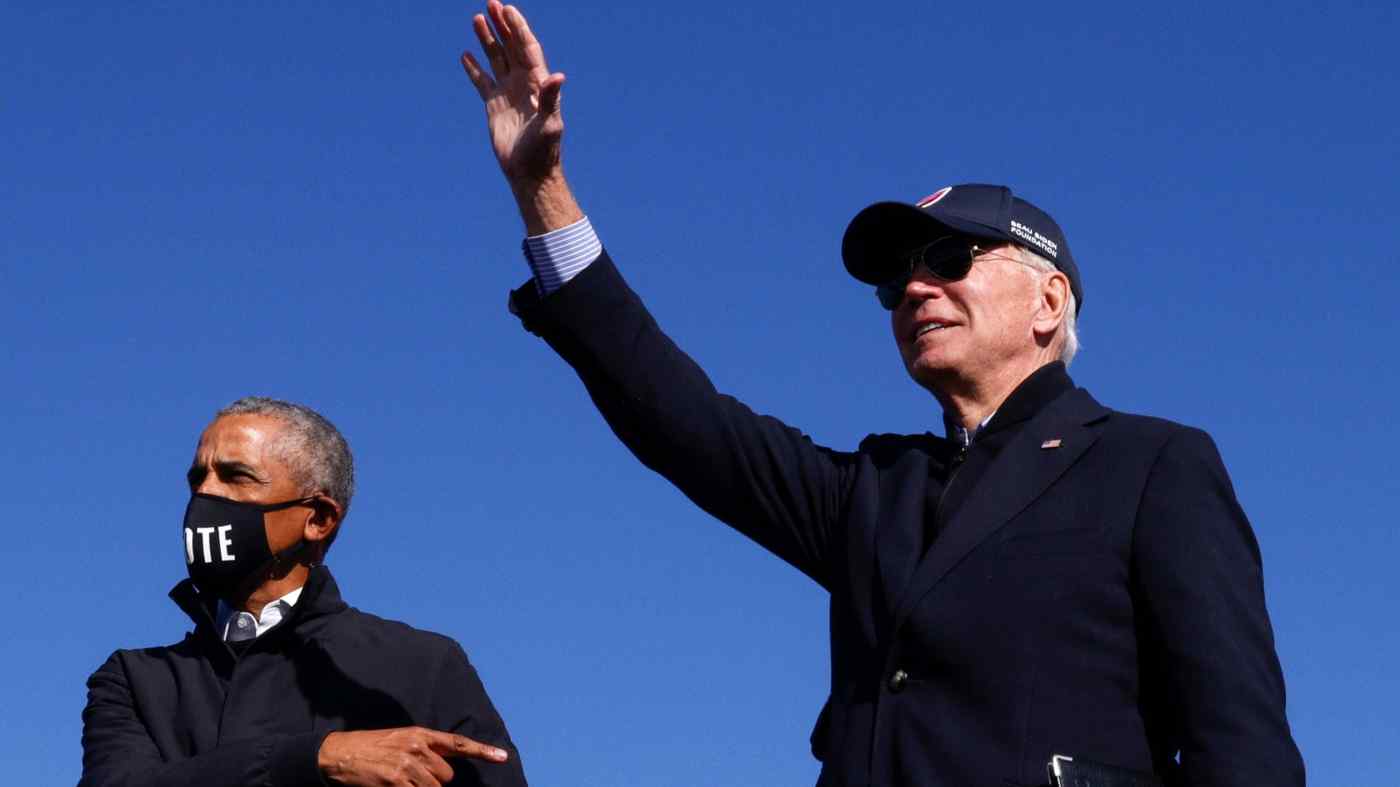 Joe Biden and Barack Obama gesture at a campaign event in Flint, Michigan, on Oct. 31: the suggestion that Biden's China policy will be a carbon copy of Obama's is analytically unfounded.   © Reuters
CopyCopied

Ryan Hass is a fellow and the Michael H. Armacost Chair in the Foreign Policy program at the Brookings Institution, where he holds a joint appointment to the John L. Thornton China Center and the Center for East Asia Policy Studies.

With the prospect of a Democrat returning to the White House now certain, we can expect a growing temptation for Asian security experts to engage in reflexive hand-wringing about an imagined American retreat in the face of a rising China.

Bilahari Kausikan provided one such example of this phenomenon in the article "Watch what you wish for, including a Biden victory" published online on Nov. 3. This kind of critique relies upon an argument that Obama was overly cautious in exercising hard power, Trump was tough, and Biden could turn the clock back to the Obama era in ways that could invite further Chinese boundary-testing. This tired argument is factually, historically, and prescriptively flawed.

First, the assertion of Obama's so-called weakness in dealing with China relies upon cherry-picked data points to paint an inaccurate picture. The caricature overlooks that Obama shifted a national security apparatus that was target-locked on the greater Middle East at the start of his presidency to one increasingly focused on developments in the Asia-Pacific. He ordered the transfer of military capabilities to the Pacific theater and negotiated expanded basing access for them throughout the region.

He did this during a period of American national exhaustion following years of war in Afghanistan and Iraq, and at a time when American voters had registered clearly their desire for more focus and resources on domestic concerns.

Obama brought Japan into the Trans-Pacific Partnership trade pact, and managed to get the U.S. and the 10-member Association of Southeast Asian Nations increasingly speaking with one voice on the future of the region in ways that had not been realized before or since. He established a permanent U.S. mission to ASEAN, met regularly with all ASEAN leaders, deepened security ties with key members, forged a strategic partnership with Indonesia, and increased intelligence sharing with major Asian partners around questions of Chinese ambitions. Across Asia, favorable views of Obama and of America were significantly higher during his presidency than is the case now.

Obama stood down Chinese challenges to the credibility of American security commitments, including at Second Thomas Shoal and Scarborough Shoal, became the first president to declare that the U.S.-Japan security treaty covers the Senkaku Islands, which China claims as the Diaoyu. He also exposed the hollowness of China's declaration of an exclusive air defense identification zone over parts of the East China Sea by flying B-52 bombers through it in the hours after it was announced. The strength of his messages to Beijing in each of these instances were enhanced by the matter-of-factness and lack of bluster with which they were conveyed. A B-52 strategic bomber from the Andersen Air Force Base in Guam, pictured in February 2012.   © Reuters

Second, the narrative of Trump as a leader with an instinctive understanding of power and how to wield it is belied by the deterioration of American influence and prestige in the region in recent years. If Trump "restore[d] the credibility of American power" by launching symbolic airstrikes on a Syrian airfield while serving chocolate cake to Xi Jinping in Mar-a-Lago, as Bilahari has argued, then why did China feel so comfortable flouting American demands in the years since?

This trend speaks to a broader truth -- Beijing weighs much more than whether a U.S. leader is willing to shoot an occasional missile at an inferior adversary when it calculates American resolve. Similarly, Trump will depart office having failed to curb North Korea's nuclear or missile programs.

And third, the suggestion that Biden's China policy will be a carbon copy of Obama's is analytically unfounded. It is well understood by the Biden team that over the past four years China has changed, the U.S. has changed, the world has changed, and American policy must adapt to respond to the situation as it exists today. Nobody in the Biden campaign has argued for dusting off the old policy playbook to deal with the current challenges posed by China.

Biden's views on China are responsive to the increasingly competitive nature of the U.S.-China relationship. This has been evident in the direct language Biden used on China throughout the 2020 presidential campaign. Biden has declared that developments in Xinjiang represent acts of genocide. He has spoken with moral clarity on Hong Kong. He has highlighted the importance of Taiwan. And he has vowed to resume the past practice of presidential meetings with the Dalai Lama. Each of these facts provides a point of contrast with Trump.

Biden's top advisers generally are skeptical of China's ambitions. They are committed to strengthening America's relationships with allies and partners and restoring the promotion of democracy and values to the center of U.S. foreign policy. Biden and his team prioritize these issues in part because they believe that doing so will strengthen America's capacity to compete with China.

To sum up, the challenges a likely Biden administration will confront in Asia are deadly serious. Asia's continued stability and economic growth demands an engaged and strong America providing balance in the face of China's rise. The key question now is how the U.S. can best exercise American power and diplomacy to help bring about a peaceful and prosperous region. The sooner the discussion moves beyond the same old cotton candy arguments about toughness, the better. There is no time to waste.