Ministry of Economy, Trade and Industry's dual roles pull in opposite directions

METI has many reasons for wanting Toshiba to disappear from the headlines.   © Reuters
CopyCopied

The reported $20 billion bid to take Toshiba private from U.K.-based private equity fund CVC Capital Partners has the investment community abuzz: Will CEO Nobuaki Kurumatani actually be allowed to pull it off and escape the nets that are encircling him?

There is no way the timing of CVC's offer, on the heels of a shareholder vote to appoint independent investigators to review alleged vote tampering at last year's annual general meeting, is a coincidence.

A going private transaction -- if it can be accomplished quickly enough -- will effectively shut down the investigation and leave the world forever guessing at whether Kurumatani and other members of Toshiba senior management engaged in misconduct. It will also relieve Kurumatani from having to face reelection at the coming AGM in June, after having eked out a slim 57% margin at last year's contested AGM.

The identity of the bidder is a further reason for raised eyebrows. CEO Kurumatani served as President of CVC's Japan unit immediately prior to assuming office at Toshiba. Kurumatani's confidant and former Lixil CEO, Yoshiaki Fujimori, currently serves as a Toshiba director and special adviser to CVC.

Given the context and relationships, it seems unlikely that CVC's bid came out of the blue. The more plausible scenario is that it was solicited by Kurumatani to save his own skin. At one end of the spectrum of possibilities, one can imagine a tacit quid pro quo between Kurumatani and his former employer: a senior management role and equity in the privatized entity for Kurumatani in exchange for his help steering the deal in CVC's direction at a favorable buyout price. 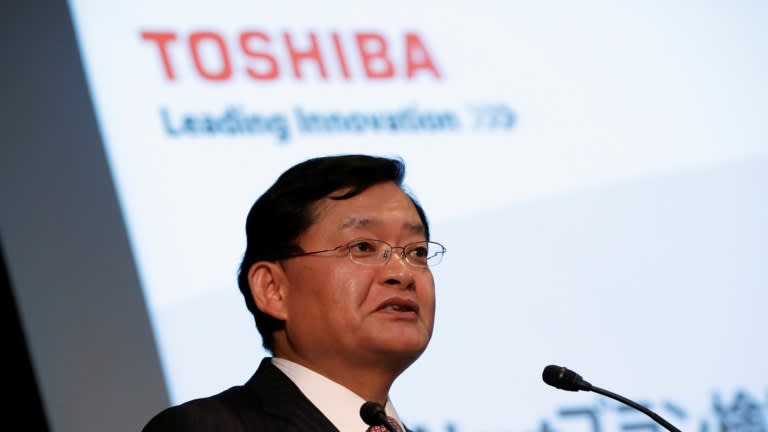 The conflicts of interest between Toshiba management and shareholders are palpable. Yet Toshiba has shown itself remarkably tone-deaf to conflicts. To take the most recent example, Toshiba's shareholders voted for an independent investigation of last year's AGM in large part because the internal review by audit committee members who themselves were candidates in the contested election raised more questions than it answered.

How Toshiba addresses the obvious conflicts will be a fascinating test of the current condition of corporate governance in Japan. As a threshold issue, will Kurumatani and Fujimori be required to recuse themselves from negotiating with CVC? Will the terms of any compensation or equity participation for them in a privatized Toshiba be fully disclosed and vetted for fairness by a reliably objective process?

Even more significant and complex, will Toshiba take the CVC bid as the occasion to put itself up for auction to the highest bidder, one that may not be interested in Kuramatani's services post-acquisition? The conventional corporate law answer, echoed in the Ministry of Economy, Trade and Industry's own fair M&A guidelines, is that competing bids should be invited to ensure shareholders get the best price possible.

But whether Toshiba should be put on the block for auction is complicated by the fact that it is a designated national security asset. Sale to a foreign fund like CVC will require METI's approval under the Foreign Exchange and Foreign Trade ACT (FEFTA).

That METI itself will necessarily play a deciding role in Toshiba's fate puts in the headlights METI's split personality as it relates to corporate governance generally and to Toshiba in particular.

But wearing another older hat, METI has served as protector of the Japanese establishment and corporate national champions like Sharp and Toshiba from a range of perceived threats, from foreign activist shareholders to takeover by China-based enterprises. Wearing its hat as protector, METI has used FEFTA to fend off activist shareholders on behalf of Japanese management in ways that often contradict the enlightened principles of corporate governance it otherwise claims to support.

In Toshiba's case, METI's insertion of former banker Kurumatani as CEO following Toshiba's disastrous acquisition of Westinghouse and subsequent accounting scandals, followed by rumored interventions by METI in the 2020 AGM to ensure Kurumatani's reelection despite widespread shareholder dissatisfaction, expose how corporate governance and METI's protective role pull in opposite directions.

METI may well decide that taking Toshiba private as quietly as possible without an auction is its preferred soft landing, for reasons unrelated to national security. The imminent independent investigation of last year's AGM, if carried out, threatens to tarnish METI's own reputation. METI has little to gain in squeezing out the last yen per share for the benefit of shareholders, and many reasons for wanting Toshiba to disappear from the headlines.

Given its continuing influence over a lucrative pipeline of going private deals such as Hitachi's recently announced $8 billion sale of Hitachi Metals to Bain Capital, METI has the power to prevent an auction for Toshiba simply by letting it be known that competing bids are not welcome.

If CEO Kurumatani slips through the nets to remain in charge of a privatized Toshiba, he will deserve grudging admiration for his ability to navigate and use multidimensional conflicts of interest to ensure his own survival.

METI's mixed motivations as the arbiter of CVC's bid for Toshiba reveal that conflicts of interest are not occasional features of the landscape but permeate and animate the ecosystem as a whole.