Students can resist Xi's crackdown, even in modest ways, with global support People who engage in defending human rights in China, quickly get in trouble.   © Kyodo

Chinese young people face a stark increase in censorship and surveillance that is reversing the clock on more than 30 years of a fair amount of freedom of thought.

While the universities never enjoyed unconstrained intellectual liberty -- and the last three decades were heavily scarred by the 1989 Tiananmen Square crackdown -- there were times when students could access the libraries of the world and engage in wide-ranging discussions with their professors and each other.

As somebody who entered Peking University in 1991, I know what this means. I arrived as a freshman who had been brainwashed at school with the ideology of the ruling Chinese Communist Party and I left with enough sense of enlightenment to later become a human rights lawyer.

Today's students face growing restrictions on their access to the main source of contemporary information, the internet. Their professors have been scared into avoiding politically-sensitive issues. Growing surveillance steers almost everybody to caution, if not outright self-censorship. The students are getting brainwashed, as I was at school.

There were three major factors that awakened me at university. One was the access to lots of underground publications that were banned by the authorities but were still accessible to students. I read a lot of books, including many on the 1989 Tiananmen crackdown. Many translated books on western philosophy and ideas on liberalism and democratic values helped my transformation. And, my encounters with independent-minded professors opened my mind.

But today there are the "seven no-talks" in place on Chinese campuses. In 2013, immediately after President Xi Jinping took the helm, university professors and instructors were not allowed to talk about universal values, press freedom, civil society, civic rights, errors in the Communist Party's history, the crony capitalist class or judicial independence. Most professors today dare not discuss these sensitive issues.

Control over cyberspace is also getting tighter. Just retweeting something the authorities deem sensitive would invite police to your door. Securing an enlightened education at university today has become difficult.

Brainwashing and extensive propaganda are effective. Many younger Chinese are not able to develop the capacity for independent thinking, as I did a generation earlier. Cynicism is quite widespread. Many young people are devoted hedonists, simply wishing to enjoy life, especially the material benefits.

There are some who have liberal minds, but they are too scared to take action. The development of digital technology, that has opened up huge stores of knowledge, has also paradoxically made Chinese citizens' to access to sensitive information more difficult. State control works.

It is true that many young Chinese study abroad. But even in democratic countries they are subject to ever-growing controls.

I now live in the U.S. after leaving China in 2014 after being arrested three times for my human rights activism. On a recent visit to Tokyo, I was grateful for a Chinese student who attended a public talk I gave and asked me a question. Many Chinese students studying in Japan, America and Europe nowadays dare not to show up at such events.

The CSSA's activities in Western and Japanese universities run counter to the principles of freedom of speech. There are some moves recently to limit their activities, but much more is needed -- democratic governments should stop the CSSA, with new laws if necessary. 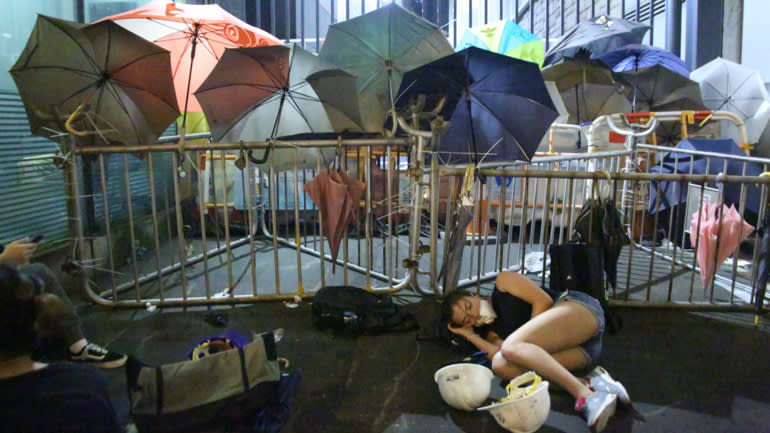 It is difficult to change the course of Chinese Communists cementing control over Hong Kong, step by step. (Photo by Yusuke Hinata)

People who engage in defending human rights in China, quickly get in trouble, as I did. Not only the individual, but family members are implicated, too.

So, I do not encourage anyone who is not willing to shoulder this kind of risk. However, even small, low-risk, contributions can help, such as retweeting messages, talking about sensitive issues with trusted friends, or paying attention to human rights cases. Secretly making small donations for such causes, even 10 yuan ($1.45) or 100 yuan, makes a difference, if many people join in.

Many children of high-ranking Communist Party members and successful business people are studying abroad. However, I do not see them as a force to turn China to a democracy. Clinging to power is beneficial for them, bringing wealth and privilege.

The reason the Communist Party leaders reject democracy is not because they do not understand it. They fully understand it and are happy to send their children to be educated in free societies. But inside China, the Communist Party will do its utmost to maintain one-party rule. That includes censorship and surveillance that deny to home-educated students the enlightenment that their privileged foreign-schooled counterparts enjoy abroad.

But I am not a pessimist. There are numbers of Chinese fighting for political freedom.

They deserve international support. It is good to see that more people in the world are starting to understand the real face of autocratic China. Their governments now need to adopt a more critical attitude to China and stop appeasing Beijing for economic benefits.

The protests in Hong Kong are heartening. It is very difficult to change the course of Chinese Communists cementing control over Hong Kong, step by step. But people have indicated their will by demonstrating in millions. The international community must support them.

The Chinese Communists are afraid Hong Kong's freedoms and sense of liberty will spill over to the mainland and threaten their rule. China has been restricting these freedoms and rights in Hong Kong, but the city's people still enjoy unrestricted access to the internet, libraries, and free discussion.

The current turmoil in Hong Kong provides an opportunity for democratic countries to toughen their policy over China and focus on the fact that it has become the world's largest threat to global freedom.

Since the beginning of U.S. President Donald Trump's trade war with Beijing, attitudes to China have hardened in America and elsewhere. But there is still a long way to go.

Teng Biao is a prominent human rights lawyer and legal scholar, now living in exile in the U.S. He is the president of China Against the Death Penalty and a visiting fellow of the U.S.-Asia Law Institute at New York University.

This article has been written by Kenji Kawase, chief business news correspondent of the Nikkei Asian Review, from interviews with Teng.