Agreement with Abe will be needed bright spot for Trump

With escalating trade tensions between the U.S. and China, the announcement made this past weekend at the G-7 meeting by President Donald Trump and Prime Minster Shinzo Abe is welcome news.

Specifically, the two leaders struck an agreement "on core principles" covering agriculture, industrial tariffs and digital trade. This does not mean that the deal is done by any means, but it does signal that the talks have moved far enough along for the parties to share solid prospects of completing and signing a narrow trade agreement on the margins of next month's U.N. General Assembly meeting.

The challenge for both sides now is to minimize evolving domestic concerns while navigating the remaining work, including the surprises that always emerge in trade negotiations. If successful, a U.S.-Japan deal would further solidify the close ties between the countries, while putting trade disputes in the rearview mirror.

A rocky path brought Washington and Tokyo to this important juncture. When the U.S. left the Trans-Pacific Partnership trade agreement, or TPP, after Trump's election, Japan led the other 10 TPP members to the successful conclusion of the replacement agreement, the CPTPP.

While the U.S. pressed Japan to negotiate bilaterally, Japan tried to convince the U.S. to rejoin the TPP, to no avail. Tokyo reluctantly relented when presented with the threat of automotive tariffs and quotas under Section 232 of U.S. trade law.

However, the Abe government secured a U.S. assurance in September 2018 that as long as negotiations proceeded, the U.S. would not hit Japan with automotive restrictions. They also established a two-stage process for the negotiations, with an initial narrow deal to be followed by a broader negotiation.

From the outset of these talks, the U.S. focused like a laser on obtaining the agriculture market access from Japan that it forfeited when it left TPP. With China's retaliatory tariffs crushing U.S. farmers, compounded by foreign competitors enjoying new market access to Japan under the CPTPP, the administration was under enormous pressure to deliver for the U.S. farm sector.

In return, Japan insisted on new opportunities in the U.S. market for its industrial and agriculture sectors.

Based on reports from both countries, we can see three results. First, it appears that Japan will provide the U.S. with TPP-level agriculture market access for a range of products, including beef, pork and wheat. 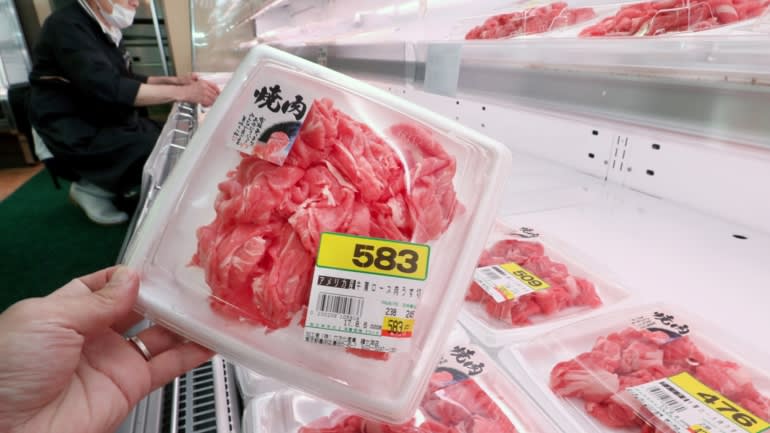 A customer looks at a U.S. beef product at a grocery store in Tokyo: the U.S. focused on obtaining the agriculture market access from Japan that it forfeited when it left TPP. (Photo by Kosaku Mimura)

Next, the U.S. will grant Japan tariff cuts on certain agricultural and industrial products, but not autos. Finally, both have forged "gold standard" rules on digital trade, going beyond TPP rules in certain areas.

The digital component is particularly timely with a U.S.-Japan partnership having enormous potential to help shape rules and standards in this cutting-edge sector under negotiation in the World Trade Organization and elsewhere.

Negotiators have their work cut out for them over the next month. They will need to tackle remaining substantive issues. No matter how much clarity the leaders and ministers provided, there will still be unanticipated matters where compromises and trade-offs will be required.

Then they must prepare the legal text, involving tariff schedules, possible side letters and a thorough legal scrub of all documents.

Third, Japan will expect sufficient assurances that it will not be impacted by any potential section 232 actions on autos and auto parts nor be asked to implement a quota, as in the case of Mexico and Canada.

And last, both sides will need to agree on how to move forward with the second stage of the negotiations, both in terms of content and timing and presumably with much more specificity than in the September 2018 Joint Statement.

The broader negotiation is of utmost importance to many U.S. industries and Congressional representatives. U.S. stakeholders not benefiting from the narrow deal, including the pharmaceutical and certain services industries, will be strong advocates for further negotiations.

Congress may be concerned that the detailed negotiating objectives of Trade Promotion Authority have been wrongfully cast aside, unless they are convinced that the administration is committed to more comprehensive talks.

Moreover, those supporting a strong rules-based system may be alarmed that the narrow deal appears to fly in the face of the commitment for preferential agreements to cover "substantially all trade," as set out in Article 24 of the General Agreement on Tariffs and Trade.

In sum, there will likely be strong calls for the administration to devote the necessary resources and a high degree of urgency to the next stage of talks.

Transforming this agreement on "core principles" into a market-opening trade pact that can be signed in September would nevertheless be a bright spot for the administration's trade agenda, which to date has not delivered on the promised results, particularly its ability to forge new bilateral agreements.

The deal is likely to receive mixed reviews in both countries, with some applauding the market access achieved while other believing that their interests were traded off and important negotiating leverage lost.

Washington and Tokyo can minimize pushback by demonstrating their strong political commitment to continuing bilateral negotiations and working closely together on the international front both to address China's unfair trade practices and to set the trade rules and standards for the next generation of technologies.