Moscow and Beijing cooperation poses hard questions for US 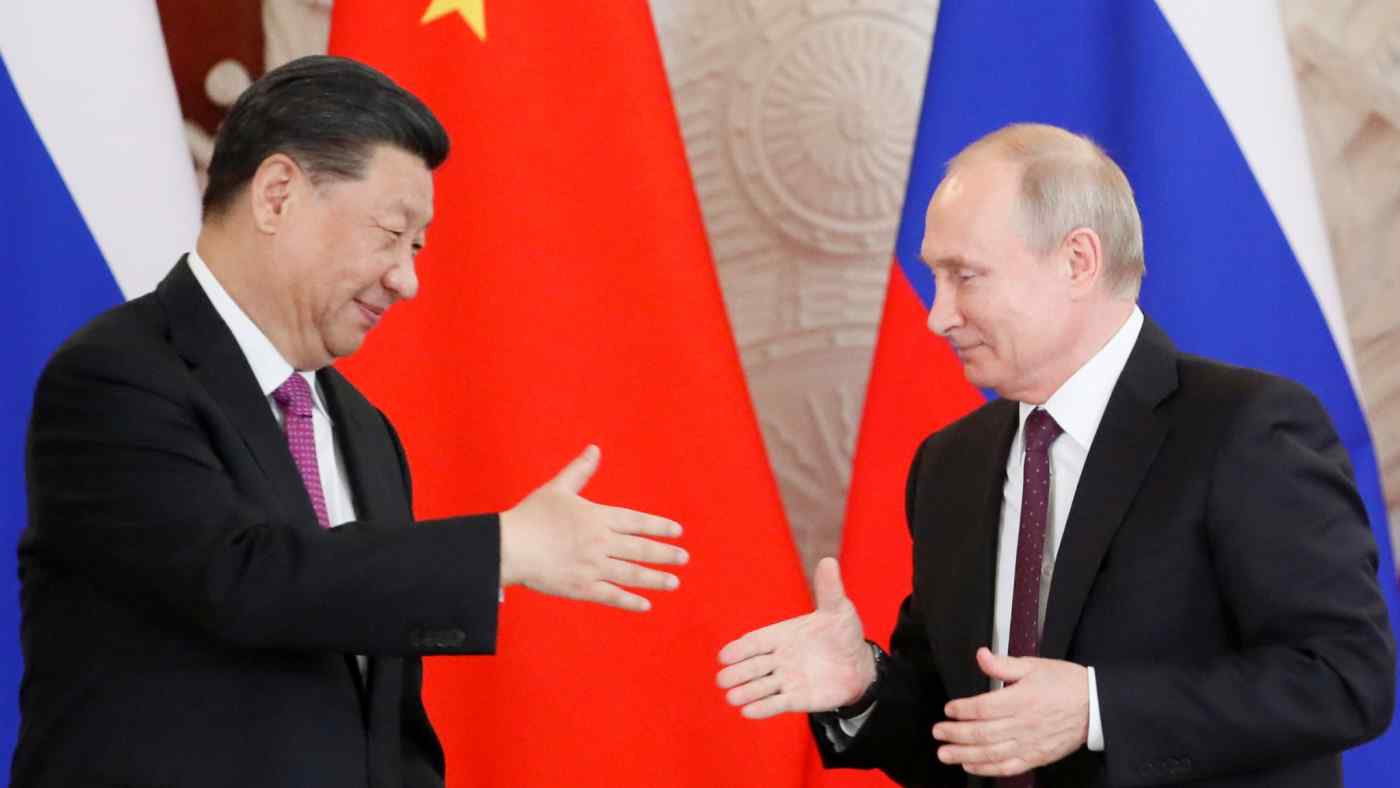 Xi and Putin have had more than 30 meetings since they came to office.   © Reuters
CopyCopied

As the U.S. and China continue along what appears to be an unavoidable collision course, an emerging question is whether another party will intervene in this rapidly developing contest -- and what role it will play.

A decade ago it appeared possible that the EU might be that third force, but it finds itself in institutional disarray. The most likely nation to take up this role is now Russia.

The first decade of the Cold War was primarily a contest between the U.S. and the Soviet Union, but the rivalry became tripolar after Soviet leader Nikita Khrushchev's repudiation of Stalinism in 1956 and the subsequent China-USSR split. This history has come back into play amid growing Sino-American friction which, if pessimists are correct, may one day be remembered as the "Second Cold War."

Russian President Vladimir Putin makes no secret of his superpower ambitions, nor of his view that the collapse of the Soviet Union was an event to be mourned rather than celebrated. In its 2014 occupation of eastern Ukraine, Moscow launched the first invasion of European territory since World War II.

More recently, it has sought to preserve its influence in the Middle East through a key role in the Syrian conflict and supporting the survival of Syrian President Bashar al-Assad. Russian support for the authoritarian regime of President Nicolas Maduro in Venezuela and its reopening and upgrading of a Cold War-era listening station in Cuba further highlights Moscow's desire to be seen as a global power.

Russia certainly enjoys claiming superpower status, and has some grounds for doing so in light of its enormous nuclear arsenal. Despite the budgetary pressure of its military spending and own economic weakness, however, it appears increasingly likely that Moscow will play the part that Beijing took on during the Cold War, as the pivotal junior party in a contested tripolar relationship.

It is possible that Russia and China will enter a full alliance, upgrading their current "strategic partnership," as the U.S. and China did in the 1970s following U.S. President Richard Nixon's 1972 visit to China.

Both states share two overarching common aims: ending American unipolarity and achieving fundamental renegotiation of a global order they each perceive as designed to hamper their development.

By squeezing Beijing through the trade war and Russia through Ukraine-related sanctions, U.S. President Donald Trump has inadvertently created a deeper basis for cooperation between Moscow and Beijing, and a focal point around which the two states could resolve remaining issues of mistrust and conflicts of national interest.

In what appeared to be a warning to the U.S., China's Foreign Minister Wang Yi said in May that China-Russia relations are "beyond compare." In practical terms, this includes Beijing and Moscow's joint declaration in May 2015 about the complimentary nature of Russia's Eurasian Economic Union and China's BRI program.

As of July, Xi and Putin have had more than 30 meetings since they came to office -- deepening the ties between two personalized regimes -- while regular "strategic cooperation" meetings are consistently held at ministerial levels.

The relationship has been further institutionalized through myriad bilateral commissions promoting cooperation in investment, energy, humanitarian, and regional integration.

However, it is in military cooperation that Sino-Russian ties appear particularly active. China accounts for around 15% of Russian arms exports and over the last decade more than 3,600 Chinese officers have been trained in Russian military academies. There is also growing cooperation between the internal security forces of both states, for example between China's People's Armed Police and Russia's National Guard -- which have jointly trained in search and rescue and assault operations.

Since the start of Sino-Russian rapprochement in the 1980s, the two countries have been careful to avoid areas of historic conflict by institutionalizing relations through entities such as the Shanghai Cooperation Organization.

Beijing has long recognized Central Asia, which Moscow sees as part of its "near abroad," as an area of Russian hegemony despite deep and growing economic ties between Central Asian states and China.

Maintenance of this fiction has been useful in strengthening Sino-Russian relations. But how long can that last when states such as Kazakhstan, remarkably silent about the persecution of ethnic Kazakhs in China's Xinjiang province, are increasingly -- and conspicuously -- in Beijing's orbit?

In addition, local officials and media in the Russian Far East have long warned of a "Chinese threat" to Russian sovereignty over the thinly populated territory.

So far, concerns about Beijing's regional aspirations have been set aside. But a cooling in Sino-Russian relations is a real possibility. Russia has long rejected Beijing's desire to denominate Russian resource exports in yuan rather than dollars as China seeks to strengthen the global status of its currency.

What will happen when China's interest in the Caucasus, a major gateway to Europe for Beijing's Belt and Road Initiative, becomes problematic for Moscow?

More fundamentally, would Moscow want a confident and expansionist China on its doorstep, even if China's growing economy provides a thriving new market for Russian natural gas?

Ultimately, China's recent economic expansionism in Serbia and elsewhere in the Balkans could be seen as a slap in the face to Russia, which has long-standing interests in the region. Despite recent signs of growing warmth, Sino-Russian economic relations remain shallow.

While noting these issues -- and thus the complexity of the relationship and why it is so often misunderstood -- the deep and regularly expressed commitment of both regimes to ending American global dominance and revising the world order will continue to reinforce the relationship in the near term.

If Sino-Russian relations do not disintegrate under the weight of their own contradictions, Washington will need to decide which relationship to prioritize, and find new wedge issues to divide Moscow and Beijing.

Bradley J. Murg is assistant professor of political science at Seattle Pacific University and affiliate professor at the Jackson School of International Studies at the University of Washington. David Hutt writes for The Diplomat and Asia Times.